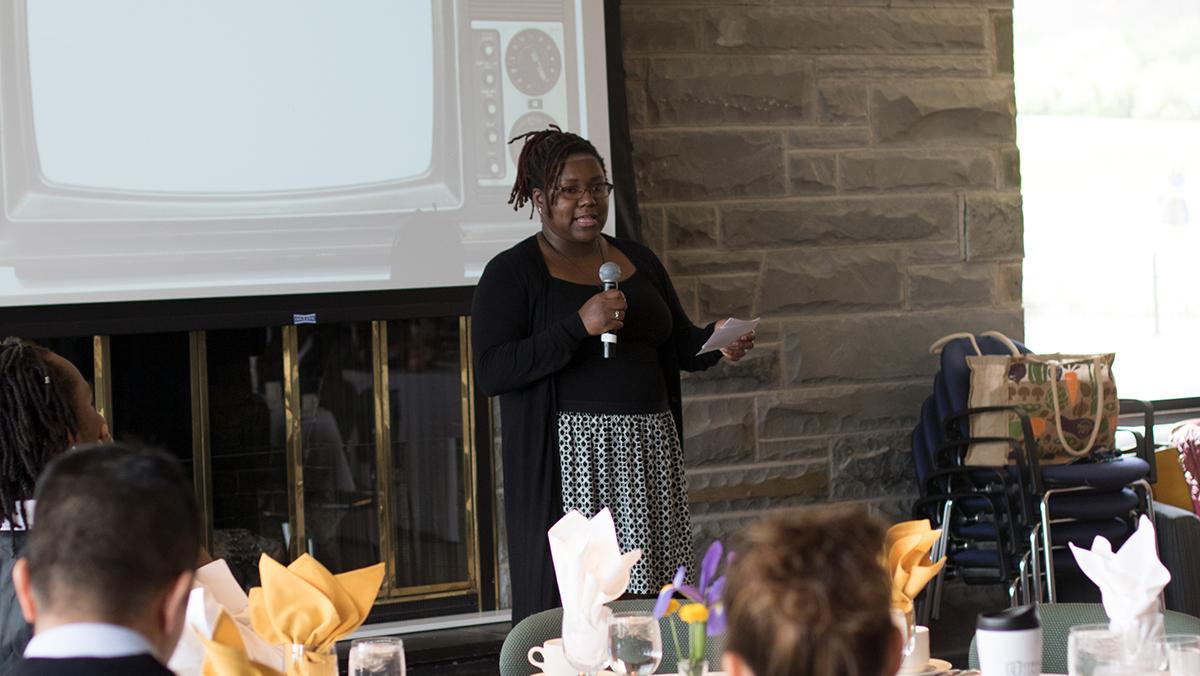 Maxine Hansford/The Ithacan
Senior Hayley Warren was one of nine scholars to present about the difference between proactivism and "slacktivism" at the April 27 CSCRE luncheon.
By Ben Kaplan — Staff Writer
Published: May 1, 2017

In the culminating presentation of their academic careers, seniors in the Martin Luther King Scholar Program chose to examine the role of social media in millennial activism, showcasing their research through video, poetry and speeches on April 27 in the Clark Lounge.

The nine scholars shared a variety of perspectives on the differences between proactivism and hollow acts of self-indulgence, which they dubbed “slacktivism.” Senior Allan Bowen, one of the featured scholars, said the premise for this presentation is that social issues are commonly spread through apps such as Facebook and Twitter, and that this has an unintended consequence of complacency in those who learn about them: that it is simply enough to share these issues, rather than act on them.

“We were given a topic that we had to address — millennials’ use in technology — and basically how, due to the changing times in our country, sometimes we become complacent about social justice use because we are constantly being exposed to issues on a daily basis,” Bowen said. “We have all been relatively guilty of slacktivism, and we understand that it is sometimes hard to go through that transition to actual action.”

The scholars also touched on the effects of the United States’ current political climate on their personal identities and experiences as young activists in college. Senior Zihui Adams talked about her involvement with the POC at IC movement and the difficulties she faced as one of the only leading Asian-American members. In 2015, the group hosted a number of rallies, speeches and walkouts in protest regarding incidents of racial aggression on campus. Adams said although she greatly valued her role in POC at IC, her experiences led her to question the validity of both her own actions and those of her fellow activists, not just in regards to POC at IC, but the purpose of activism as a whole.

“Too often, movements become about individual egos,” Adams said. “It becomes about being tweeted about or being interviewed for a feature article in The Ithacan … It stops being about the larger movement itself.”

“That’s very much up to you — how you decide how to implement change,” Morales said. “As millennials, we said that social media is a tool that is not going to leave our lives, but if you are interested in being engaged in social issues, you can use that platform in a more productive way by not only sharing awareness of what is going on domestically and internationally, but also by getting involved.”

To audience members like Cheryl Christopher, the event provided insight into issues that she, as an individual removed from the dialogue among younger people, was not particularly familiar with, she said.
“I don’t think that we as a generation always know what is going on,” Christopher said. “We did years ago when our parents were growing up and our grandparents were growing up, and I think now, me being over 50, I would’ve thought that these issues were long gone and done with.”

Senior Zihui Adams’ name was previously misspelled. It has been corrected.

As John Rawlins III prepares to leave his position at Ithaca College after serving eight years as the assistant director for Multicultural Affairs on Sept. 19, he and the students he has worked with reflect on the contributions he has made to the college community.