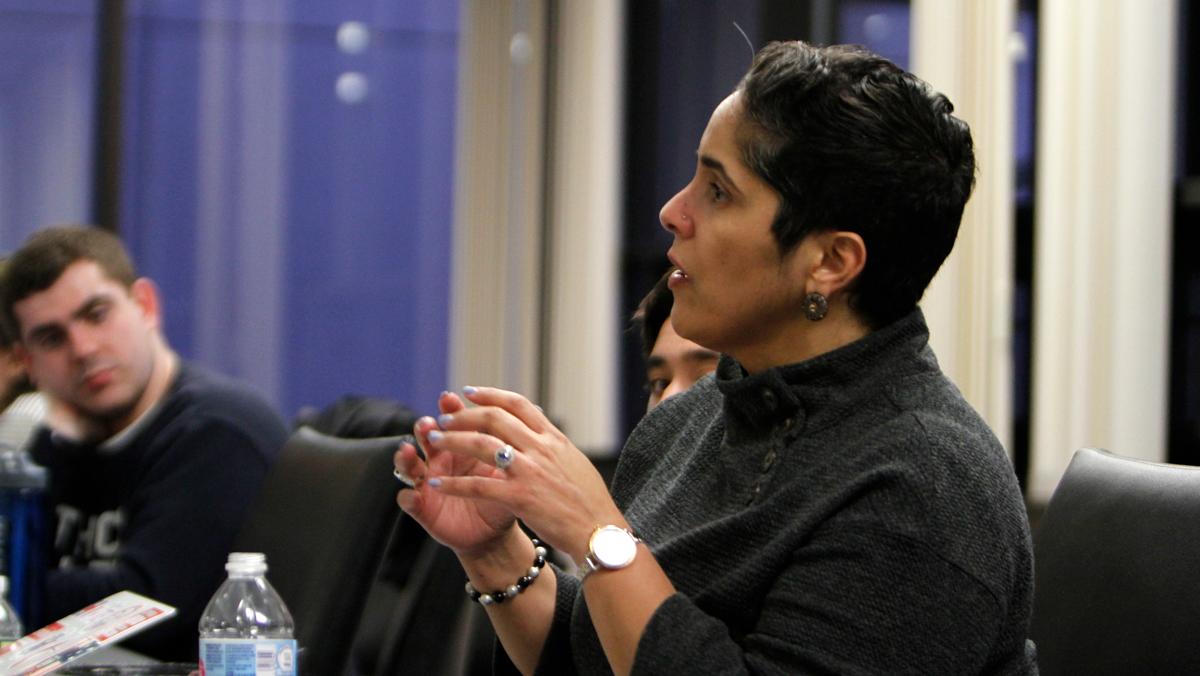 Jackie Marusiak/The Ithacan
Ithaca College President Shirley Collado presented to the SGC on the five year strategic plan and how the process will look going forward. She emphasized on the importance of community feedback.
By Alexis Manore — Staff Writer
Published: April 23, 2019

Cornish said the Strategic Planning Steering Committee is finished with the idea generation stage of the plan and is beginning to develop goals for its implementation. The strategic plan is the college’s five-year plan that aims to reimagine the structures at the college. She said the steering committee will create the implementation plan over the summer after the Ithaca College Board of Trustees approves the current plan at a retreat at the end of the academic year.

Cornish said students will be able to see the draft as it is updated and changed through the college’s website.

Cornish said part of the plan will include a redesign of the Campus Center, which is currently in progress, and a redesign of Terraces Residence Halls and the Upper and Lower Quads residence halls.

She said a potential goal is to make the college into a 12-month campus — to keep it open and have activities occurring on campus for the entire year.

Cornish said part of the plan will also develop an enrollment strategy for the college to find the optimal amount of students to accept each year.

Cornish said she would also like the plan to include a partnership with Tompkins Cortland Community College and Cornell University to provide students with a streamlined way of acquiring a two-year degree, then a Bachelor’s Degree and then a Ph.d.

Collado said she is making an effort to have more working groups and fewer committees working on the strategic plan in order for groups, such as students and broader community members, to give input. She said she is looking for ways to maintain student interest in the strategic plan over the summer so their voices are not ignored while they are on break and away from campus.

In additions to Collado and Cornish’s discussion, the SGC also passed two bills and tabled one bill.

A recommendation about providing automated external defibrillators (AEDs) in residence halls, which was tabled April 8, was presented again and was passed with a vote of 9–0 with one abstention. The bill was sponsored by sophomore Connor Shea, transfer students senator, and freshman Maxwell Powers, Residence Hall Association representative.

The bill stated that AEDs should be accessible to all students and linked to the Office of Public Safety and Emergency Management to alert it when an AED is being used.

The act amended the travel policy to state that the Appropriations Committee will not fund trips taken through rideshare apps like Uber and Lyft and will not fund the usage of Airbnb, a website that allows users to share their homes with travelers and guests.

Golden said this is to align the SGC’s policies with the college’s travel policy, which states that the college’s preferred vendor for cars is Enterprise Rent-a-Car.

The act stated that the SGC will fund tips up to 20 percent for taxi rides and food delivery. It also struck down a provision in the handbook that did not allow student organizations to use funding to maintain websites.

The SGC tabled the Attendance Recommendation for Fall 2019 with a vote of 8–0 and two abstentions. It was sponsored by sophomore Senator-at-Large Elijah Nishiura and freshman Abigail Murtha, Senator for the School of Health Sciences and Human Performance. The recommendation was tabled because the Senate felt the language and statements needed to be examined and improved for it to be successfully passed and implemented.

The recommendation states that the college’s attendance policy, current emergency closing policy and professors’ syllabi should be changed to excuse students from class for weather-related reasons that prevent them from attending class.

It suggested that students may contact their professors to make up class work if they are unable to attend for weather-related reasons, and if the professor and student are unable to come to an agreement, the student can reach out to the Office of Risk Management if they feel as if they have a valid claim.

Nishiura said they have not reached out to the Office of Risk Management yet to discuss a collaboration for this recommendation.