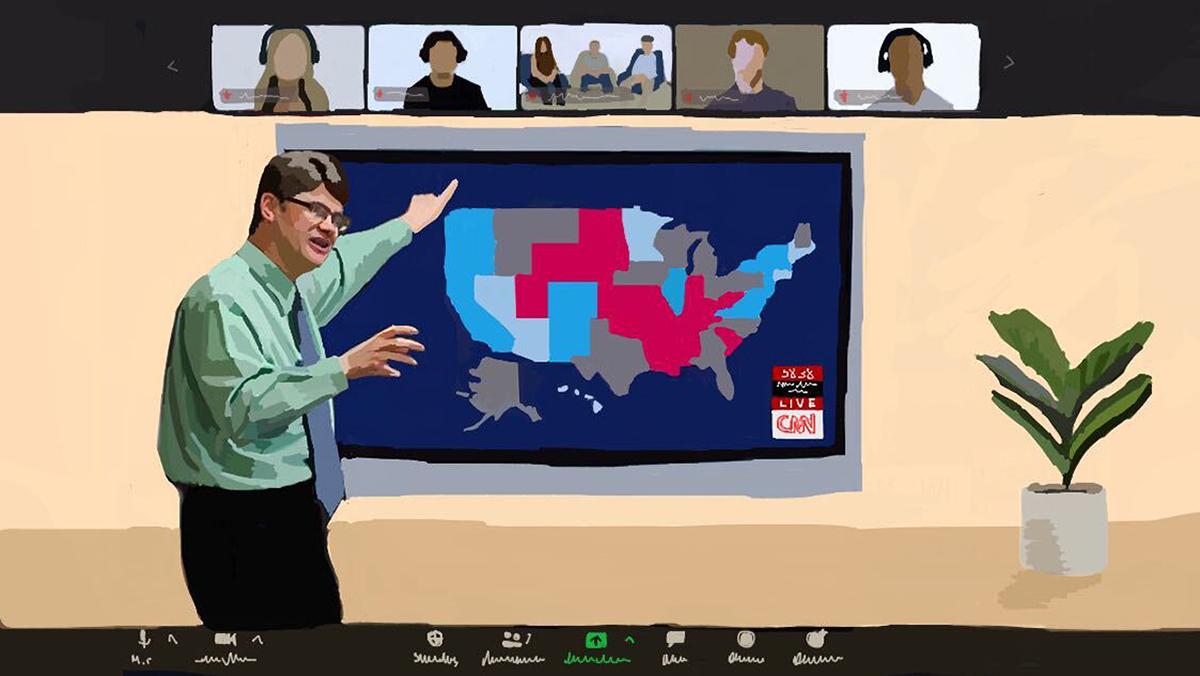 Anna McCracken/The Ithacan
Faculty members in all five schools have adjusted their courses to include these topics and found ways to integrate current events into their curricula, like holding open discussions and debates, as well as assigning news articles for students to read.
By Syd Pierre — Staff Writer
Published: November 18, 2020

On top of adjusting to teaching remotely, faculty members at Ithaca College have been updating their course curricula to address events that are impacting students. These events include this year’s divisive election, the ongoing COVID-19 pandemic ravaging the nation and racism across the United States.

Faculty members in all five schools have adjusted their courses to include these topics and found ways to integrate current events into their curricula, like holding open discussions and debates, as well as assigning news articles for students to read.

Kari Brossard Stoos, department associate chair and associate professor in the Department of Health Promotion and Physical Education, is currently teaching a course called Viral Diseases of the World. She said she discusses current viruses and diseases that are affecting people and how outbreaks have been historically handled.

“You have to also be very cautious of some of the things we’re seeing as we explain it, understanding that students in your class might have COVID or may have had COVID or may have family members going through it,” she said. “It’s a different layer than if you were teaching it from a historical perspective.”

Senior Abby Carpenter is currently taking the course and said she was interested in it because learning about pandemics while also living one makes the material more important.

“I feel like if I was taking this and we weren’t in a pandemic … I would be like, ‘Oh, my gosh, there’s no way that could happen,’” Carpenter said.

In another course Brossard Stoos is teaching, Disease and Lifestyle, she said she has discussed the intersectionality of COVID-19 and social determinants of health, including institutionalized racism in the health care system.

The CDC cites discrimination and racism as factors that can contribute to increased risks of contracting COVID-19. The CDC also reported that Black people have a 4.7 higher rate ratio of hospitalization from COVID-19 and a 2.1 higher rate ratio of death compared to white people.

Brossard Stoos said she acknowledges the fatigue that students can feel because they are currently living in and learning about the pandemic. She said she has thought of new ways to approach the topic, like holding debates for students.

Stewart Auyash, associate professor in the Department of Health Promotion and Physical Education, is teaching a class called Front Page Public Health: Policy and Epidemiology. He said that he has been teaching about pandemics since the 1990s. In the spring, Auyash will be teaching a new course called Cholera to COVID: A History of Public Health.

Like Brossard Stoos, Auyash said his students have also experienced pandemic fatigue, but he tries to put as much of a positive spin on the situation as he can.

“I don’t think it’s going to end anytime soon, so I don’t want to get people’s hopes up,” Auyash said. “I think managing it in a way that benefits all of us is probably the best strategies we teach, equally intellectually, emotionally and psychologically.”

Auyash researched the SARS pandemic and uses his experience as a source for his students. He said a benefit to teaching this course during a pandemic is that his students no longer have to rely on his experiences because they now have their own.

He said that Christina Moylan, director of public health emergency preparedness, has asked his students to review and help with communication strategies when students return to campus. The strategies include how to inform the campus community if someone tests positive and communicating the safety regulations put in place for students.

David Gondek, associate professor in the Department of Biology, is teaching a course called Plagues and People, which examines the historical effects and biology of pathogens. Gondek said that enrollment for the course filled up quickly, with 60 students enrolled.

“I think that when there’s an obvious connection that people can make to looking at college coursework and how it connects to their lives, then those are appealing courses,” he said.

Chee Ng, assistant professor in the Department of Finance and International Business, said that for his class, Boom, Bust and the American Economic Cycle, he acquired data from the Federal Reserve Bank of St. Louis about the quarterly Gross Domestic Product (GDP) for 2020. He said that the first two quarters of the year had a negative GDP, which qualifies as a recession, and that in the third quarter, the GDP increased by 33.1%.

Ng said that his class has discussed how many Americans were affected by this economic downturn and subsequent improvement, an occurrence that was spurred by the COVID-19 pandemic.

Noliwe Rooks, director of the American Studies Program and professor in the Africana Studies and Research Center at Cornell University, wrote an article for The Chronicle of Higher Education that offered advice to faculty about teaching current events. The article, published in Fall 2014, came after a summer of uproar following the shooting of Michael Brown and the Ebola outbreak, mirroring the ongoing COVID-19 pandemic and the killing of George Floyd.

In the article, Rooks advised faculty members to ensure they are familiar with the issues and can provide scholarly sources beyond information provided in mainstream media.

Donald Beachler, associate professor in the Ithaca College Department of Politics, said that his course, Elections in the U.S., garnered more interest from students this semester. He said that there is generally higher student interest in the course during a presidential election year.

The 2020 presidential election, which occurred Nov. 3, has been a heavily followed and deeply divergent topic of conversation over the past year. President-elect Joe Biden defeated President Donald Trump on Nov. 7, and according to the Associated Press, the voter turnout in the election reached a 50-year record high. While votes are still being counted, as of Nov. 9, 62% of eligible Americans have voted in the 2020 election, accounting for 148 million votes.

In the Park School, Chrissy Guest, associate professor in the Department of Media Arts, Sciences and Studies, and students taking her course, Live Event Production, worked with Anthony Adornato, associate professor in the Department of Journalism, and his Mobile and Social Journalism class to provide live coverage of Election Day.

Guest said the students live streamed their coverage from 8 a.m. to 10 p.m. over Facebook, Twitter and Youtube. A team of six students from her course used remote access software to control equipment that was in the Park School to produce the live segments.

“It was amazing to hear the production team talking over a communications channel setup using Zoom during the production and watch the systems moving as they controlled them from home,” Guest said via email. “It is collaborations like this one that offer students real opportunities to grow and see what they are capable of.”

Beachler said the election provided direct examples for students to learn from.

Racism and police brutality have been long-standing issues in the U.S. Black people have been 28% of those killed by police in 2020 despite being only 13% of the population, according to Mapping Police Violence. Over the summer, the killings of George Floyd, Ahmaud Arbery and Breonna Taylor and the shooting of Jacob Blake in November led to widespread national protests against police brutality and racism against Black people. The increased focus on racial inequality has led approximately half of Americans to say it is very important for people in the U.S. to educate themselves about the history of racial inequality in the country, according to a 2020 Pew Research study.

Alex Reed, associate professor in the Department of Music Theory, History and Composition, said that he worked to change his class, African American Popular Music: Blues to Hip Hop to be more student centered, to keep students engaged in the class even while it is remote. He said that students have led presentations on over 30 artists, like Nina Simone and Prince.

“Because class already happens in a multimedia environment, it’s easy for us to engage with this music directly,” he said via email. “I do still wish we could all be in the same room, though.”

Brenner said that in previous years when he taught the course, it was structured as a boilerplate introduction to environmental science, which required textbook readings and lectures. Now, students write blog posts after reading articles and watching videos about topics they have discussed in class.

“We thought that a way to help students navigate those unprecedented challenges that we’re all facing would be to make the course really current and make it something that could build habits of awareness in their everyday lives,” Brenner said. “And so the current events approach was an inroad for us to do that.”

Freshman Lydia Brandt said she chose to take the course because she has always been interested in environmental science. She said she likes the format of the course.

“We’re just doing more learning rather than just getting an assignment done,” Brandt said. “There’s less pressure and just a better ability to take in the content and understand it.”

Brandt said that the course is different from past environmental classes she took in high school because of how current the material is.

Brenner said he was deliberate in including anti-racism content into the course. Students in the course have watched documentaries and discussed articles about the water crisis in Flint, Michigan.

“If we say it’s structural or if we say it’s systemic, that doesn’t let us opt out,” Brenner said. “It doesn’t let individuals, especially white, privileged individuals like myself, opt out of or brush off that. … So calling it out, recentering the environmental racism in conversations about environmental injustice took a conscious effort this year.”

Chris Holmes, associate professor and chair of the Department of English, is teaching an honors seminar for freshmen about guns in the U.S. Holmes said that including more current events, like how the COVID-19 pandemic and the election have increased gun sales, into his course made sense.

“I think for gun violence, it’s an easy decision because the way that we’re treating guns in the country is changing, and it’s changing sort of only in one direction,” Holmes said. “That direction is [seeing] guns more and more in every facet of our lives.”

Holmes worked with sophomore Isaac Schneider, the course peer leader, over the summer to integrate certain topics into the course, including the election and the intersection of racism and gun violence.

Schneider, who took Holmes’ course during Fall 2019, said one benefit of including more current events has been prompting students to take action toward gun violence.

“I think everyone in this class has no doubt that this feels extremely, extremely real,” Schneider said. “I think this very tangible, omnipresent fight that is happening and is not just centered to guns, that is tied into guns, police brutality, racial tensions and the history of it, a pandemic and an election that’s historic for a lot of parties and a lot of people.”

The Gifford Law Center to Prevent Gun Violence stated that Black men make up 52% of all gun homicide victims but comprise less than 7% of the population in the U.S., according to the most recent reporting from the CDC in 2018.

Schneider said that if he had not worked with Holmes to adjust the curriculum to fit the current political and social climate, he felt like it would have come across as inappropriate and tone-deaf.

“I think it’s very necessary,” Schneider said. “I would argue that it’s not even an option. If … you’re dealing with something that is so interconnected and ever-changing with what’s going on right now, my personal opinion would be it wouldn’t be an option to keep the curriculum the same as before.”