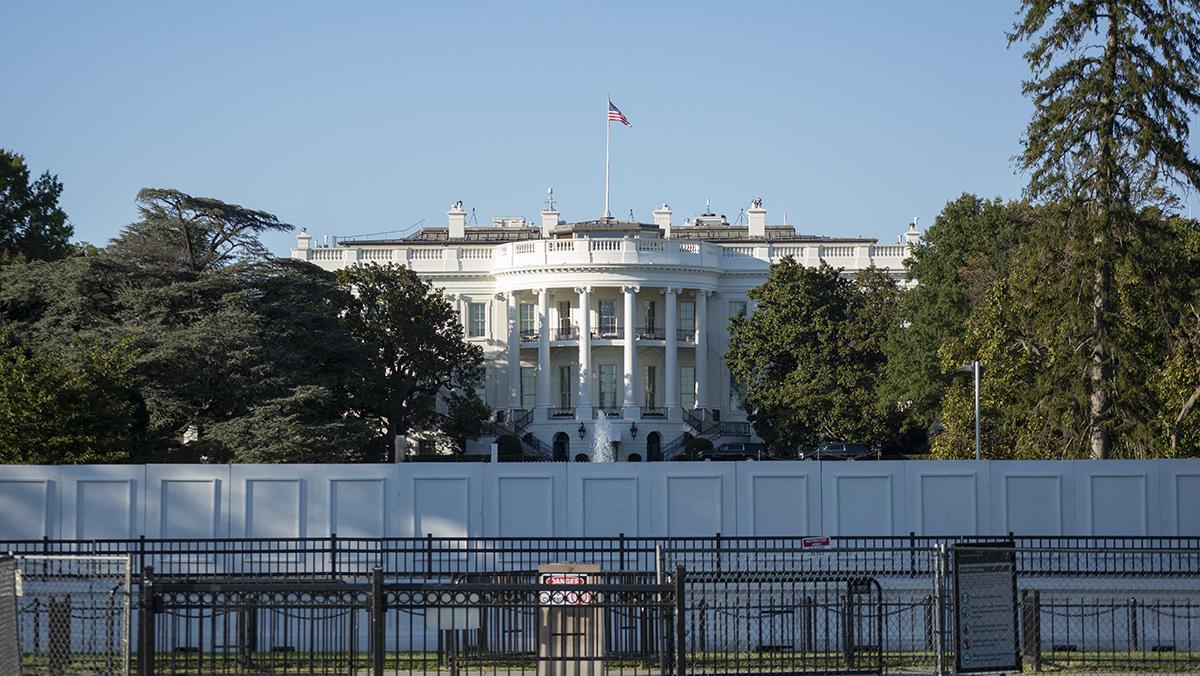 Eleanor Kay/The Ithacan
In the midst of a pandemic and national protests against racism and police violence, this year's election between Democratic nominee Joe Biden and Republican nominee President Donald Trump could be one of the most important elections in recent history.
By Ryan Bieber — Staff Writer
Published: October 15, 2020

With the 2020 presidential election 19 days away, Ithaca College students are gearing up to vote.

In the midst of a pandemic and national protests against racism and police violence, this year’s election between Democratic nominee Joe Biden and Republican nominee President Donald Trump could be one of the most important elections in recent history. The COVID-19 pandemic has created complications throughout the campaign, election and voting processes. With so much uncertainty, organizations at the college have come together to increase voter education and awareness before Nov. 3.

IC Votes, a campuswide nonpartisan voting initiative, was formed last spring by senior Elijah Nishiura in partnership with the Student Governance Council and Center for Civic Engagement. Although Nishiura is taking this semester off to work for the Biden campaign, IC Votes has carried on with the help of senior Connor Shea, president of the SGC, as well as IC Democrats, the Ithaca College Republicans and the Center for Civic Engagement. Nishiura said via email that he is unable to speak to The Ithacan until after the election.

Shea said that this semester, his goal has been to get as many campus organizations involved with IC Votes as possible. The group has teamed up with organizations like Premium Blend and Planned Parenthood Generation Action to promote and host virtual events over Zoom and social media. IC Votes is also holding a competition for student organizations to see which group can get all of its members to vote first.

IC Votes is nonpartisan, something Shea said he hopes will bring the campus community together during the election.

“I’ve heard from a lot of students that we have these silos that we put ourselves in based on whatever affiliations we have,” he said. “This is providing a sense of community for everybody, which is really exciting.”

Sophomore Lucy Calderon, president of IC Democrats, echoed the nonpartisan intentions, encouraging students of all political parties to come together and vote.

The SGC passed two bills in October to encourage student voting. The 2020 Ithaca College Voting Act recommends that students be excused from class to vote on Election Day and the Excused Absence for Poll Workers Recommendation suggests that students working the polls receive an excused absence.

The emphasis on the student vote has come to the forefront in the past few years. One in 10 eligible voters will be between 18 and 23 years old this year, and people aged 39 and younger will make up a third of eligible voters, according to the Pew Research Center. Still, younger voters consistently go to the polls at lower rates than other groups, according to Politifact.

This has begun to change in the past few years, however, as the youth vote rose from 20% in 2014 to 36% in the 2018 midterm elections, according to the United States Census Bureau.

A report released by the Tufts University Institute for Democracy and Higher Education with the National Study of Learning, Voting and Engagement (NSLVE), which Ithaca College participated in, found that 81% of students were registered to vote in 2018. This is an increase from the 60.6% who were registered in 2014, according to the 2014–18 NSLVE report. The report also states that the voting rate for registered students at the college was 41% in 2018, compared to 9.7% in 2014.

Voters between 18 and 23 years old are twice as likely to vote for Biden over Trump, according to a Politico poll. However, 45% of respondents supporting him said they are mainly voting against Trump, not because they are in support of Biden. When Trump won the 2016 election, many students at the college expressed their disappointment.

Donald Beachler, associate professor in the Department of Politics, has been teaching at the college since 1988 and said that over the years, he has seen a shift in student voting.

“It’s hard to know, but I think you’ll probably get a relatively good turnout for students,” he said. “I think young people are still going to be a lower percentage, but certainly in the last several elections beginning with Barack Obama, I’ve seen more and more student interests.”

Beachler attributes lower voter turnout among young adults to the fact that most live at college rather than in their own communities. He said that as a result, students feel distanced from the news and politics. However, now that the college is holding classes remotely for the fall, more students than usual are living and voting at home.

Beachler said that if students want to see a change, they have to get out and vote.

“It’s up to the individual, but by not voting, they see more influence on people who are older than them and have different interests,” he said.

David Harker, director of the Center of Civic Engagement, has been working with IC Votes and emphasized the point of increasing the student vote by educating students on political issues.

“I want people involved in the process, and I want people to know about what they’re voting for,” he said. “Not everyone cares about the same issues in the same way, but everyone has issues that are really important to them, and no matter where you stand, I want you to be able to have the resources to make an informed decision.”

The COVID-19 pandemic has dramatically changed the way many people will vote. There is an expectation for an increase in mail-in and absentee ballots this year, as at least three-quarters of Americans will be eligible to vote by mail for the 2020 election.

Beachler said the combination of mail-in voting and social media could have interesting results, especially considering that Trump has repeatedly said he will not accept the result of the election if he loses the election.

“Some states don’t count mail votes for several days after the election, so there may be a period of doubt which allows people to create all kinds of conspiracy theories, and social media allows that kind of stuff,” he said. “The great thing about Facebook or Twitter is that anyone can post there, but the terrible thing about Facebook, Twitter and all the other social media platforms? Anyone can post there.”

IC Republicans officially endorsed Trump in a statement on Instagram. The organization refused to endorse Trump for the 2016 election because its members believed he did not embody conservative values.

“We believe he will be an effective leader accomplishing the goals of every American and protecting the liberties and freedoms imbedded [sic] in our Constitution,” the statement said.

Senior Michael Deviney, president of IC Republicans, highlighted the significance of local elections, despite the focus on the presidential election.

Since last spring, members of IC Republicans have been campaigning for U.S. Rep. Tom Reed (R-NY), who represents Ithaca within New York’s 23rd District. In light of the COVID-19 pandemic, Deviney and others have switched to phone banking and dropping off campaign signs rather than going door to door.

Paula Younger, executive director for government and community relations at the college, is currently on a leave of absence to serve as the  campaign manager for Democratic candidate Tracy Mitrano, who is challenging Reed for the District 23 congressional seat. Mitrano challenged Reed during the 2018 midterm elections but lost to Reed. Mitrano is currently seven points behind Reed in the polls. Tompkins County is primarily Democratic, with the exception of more right-leaning communities like Groton.

Junior Michael Post, vice president for IC Republicans, has had plenty of experience campaigning for local politicians. During the spring, he also campaigned for Reed, but now that he is back home in New Jersey, he has been phone banking for U.S. Rep. Christopher Smith (R-NJ) in New Jersey’s 4th district, in addition to virtually helping Reed.

Post added that working on campaigns has helped him see politicians in a new light.

Freshman Jessica Moskowitz serves as the New York state director of March for Our Lives — an organization that aims to end gun violence, — and is holding a virtual event with congressional candidates, Democrat Mondaire Jones of the 17th District, Democrat Jamaal Bowman in the 16th District and Republican Kyle Van De Water in the 19th District, Oct 17. They will discuss mental health, gun violence and police accountability.

“Really, what we wanted to do is just bring some of the local officials into a conversation and make sure that young people can ask questions and be informed about where our candidates stand on the issues,” Moskowitz said. “I think a lot of people have really given up faith in the system, and I just want people to center that anger and frustration into educating themselves into finding out who the candidates are that represent them.”

Moskowitz said while the virtual event is open to anyone, March for Our Lives puts a particular emphasis on engaging students and young adults.

“I want young people to come out and be involved,” she said. “I think we all have a really big responsibility to do whatever we can to help make the world a better place, and a big part of that is making sure that we have people in office who are also fighting for these goals.”

This semester, the college created a new initiative that gives students credit for being involved in the election process. Students who are working at the polls, monitoring elections or engaging with other election initiatives can receive half a credit or one credit for their efforts.

Ann Marie Adams, instructor in the Department of Media Arts, Sciences and Studies, has been working alongside Jack Powers, interim dean of the Roy H. Park School of Communications, to create this initiative as a way to get more students involved with the political process.

“There is so much value to understanding the process and how you can get engaged with it,” she said. “I would say this is just another way to get individuals involved in the process if it’s the incentive they need to make it worthwhile for them.”

Adams said that at the end of the semester, she hopes to bring participants together virtually to talk about their election experiences and start a dialogue around political engagement.

Ultimately, Harker said, the only solution to real political change is voting.

“It sounds like an oversimplification, but our democracy doesn’t work unless people are informed and involved,” he said. “Decisions are being made that impact your life whether you’re involved or not, so why wouldn’t you want to be involved in that conversation?”