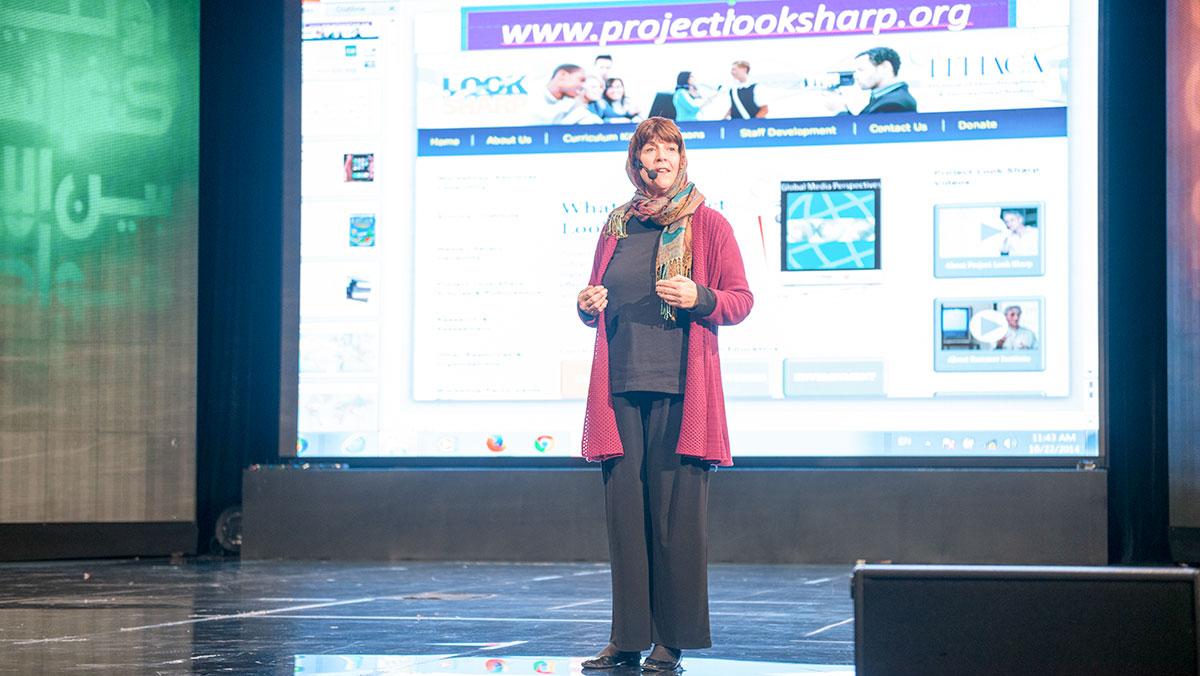 Psychology professor Cyndy Scheibe and Chris Sperry, director of curriculum and staff development for Project Look Sharp at the college, were two of the four keynote speakers on Oct. 22 at the First International Conference on Media Literacy in Tehran, Iran.

Iran’s Media Literacy Research Group asked them to speak because of the work they do with teaching media literacy through Project Look Sharp, Scheibe said.

Project Look Sharp is a media literacy initiative that develops and provides lesson plans and media materials as well as supporting effective integration of media literacy with critical thinking at all levels, according to its official website.

Getting students to engage in the classroom and getting professors and teachers to engage the students, rather than just lecture, was the key point for this conference, Scheibe said.

“It’s very common for students in Iran to not even open their mouths until college,” she said.

By presenting videos of children raising their hands and participating in class to an audience made up of policy makers, college students, educators, the media and a number of the other government ministries, Sperry said, they were able to show what effective media literacy in the classroom can look like and how engagement in education is critical.

Sperry said the largest obstacle to their travel to Iran was getting their visas approved, which took about three months.

He said they had to go through the Pakistan Embassy and ended up having to hire a lawyer in Washington, D.C., who was the nephew of a friend of Scheibe’s, to actually walk their applications through the U.S. Department of State and ship them back.

“It was quite a hair-raising experience getting the visa,” Sperry said. “I think it had a lot to do with bureaucracy, but also the difficult relationship between the United States and Iran. It came through the day before we left.”

Tanya Saunders, assistant provost for international studies and special projects, said the college does not sponsor or provide funds to travel to countries listed under the U.S. Department of State travel warning list, which includes Iran. This is a policy that has been in place at the college for several decades.

“The State Department has its reasons for placing a country under warning,” Saunders said via email. “We do not second guess those reasons.”

Scheibe said concerns about safety were expressed by a number of people, but she and Sperry were free to travel on their own behalf.

“The college would not support the trip financially, but we never asked them to,” Scheibe said. “All expenses, literally all expenses, were paid by the folks in Iran.”

As part of their preparation for this conference, Scheibe contacted Hormoz Movassaghi, finance and international business professor at the college, to advise them on cultural customs and how to communicate to their targeted audience.

“When it came to general guidelines, I told them people were very friendly in Iran,” Movassaghi said. “I also said that university audience people were eager to learn, so they will be well received and respected.”

Scheibe said when they finally landed, the hospitality shown by the Iranian people was incredible.

Sperry said their translator and lead contact, Mostafa Movahedian, was open to hearing their ideas and talking with them about what could and couldn’t be discussed.

Scheibe said they were surprised by the differences in culture during the conference. She said she was warned that because she is a woman, the different speakers and audience members might address questions toward Sperry more than her. However, at one press conference with the special assistant to the mayor of Tehran, he spoke only to Scheibe and almost completely ignored Sperry, Scheibe said.

“We still don’t know why this was the case and laughed about it later with our hosts,” Scheibe said.

Sperry said they learned much from their Iranian hosts and their audience at the conference, which he said responded enthusiastically to their questions and interactive-media decoding.