Rochon paid above the median salary at private institutions

A recent report from the Chronicle of Higher Education reveals that Ithaca College President Tom Rochon has the second-highest salary in a group identified by the Chronicle as the college’s peer institutions.

Rochon’s total compensation for the 2013 calendar year, the most recent year for which data is  available, was $458,318. This includes base pay, bonus pay, nontaxable and “other.” His base pay of $379,296 was 4.72 times the average faculty salary at the college. This base pay was 13.2 percent higher than the median salary of the 558 chief executives of private nonprofit institutions included in the study. Rochon received an approximate 5.8 percent raise in 2013, as he earned $433,132 in the 2012 calendar year. 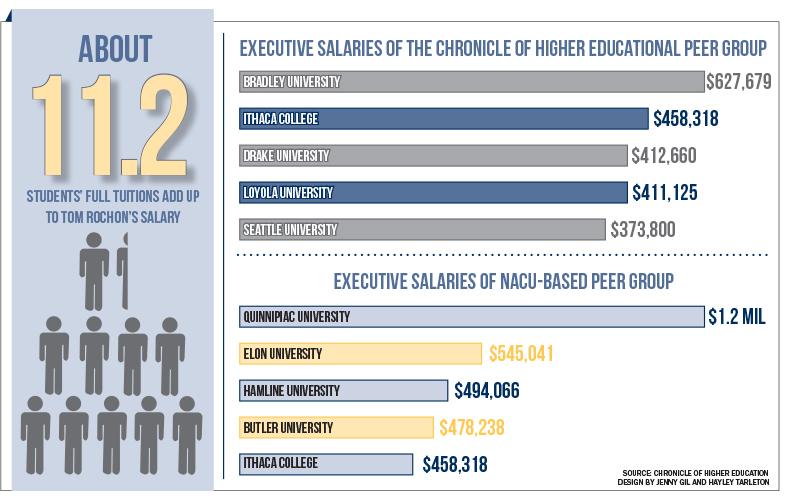 Gerald Hector, vice president of finance and administration, explained the president’s salary is set based on market data and the college’s own list of peer groups of comparable institutions. While Hector said Rochon’s salary is up to the Ithaca College board of trustees to decide, he said many institutions follow the same general practice: The base pay is determined by general merit, received if the president adequately fulfills his responsibilities and goals, and additional merit, received if a president takes on extra duties or goes above and beyond in their work.

Nancy Pringle, vice president and general counsel for the Division of Human and Legal Resources, was the second highest–paid listed employee at the college in 2013, with $253,289, according to the Chronicle’s report.

Pringle said she had “no clue” how the Chronicle came up with the college’s peer group. Three are religiously affiliated, and so a significant portion of their presidents’ compensation goes directly to the religious institutions. For instance, Siena College was founded in the Catholic Franciscan tradition. The Chronicle recorded that Rev. Kevin J. Mullen, who was its president from 2007 to 2014, received $0 in total compensation during the years of the report.

Pringle also said the college uses several different peer groups for different areas within the college. She said there is a regional group, a national group and a group determined by the faculty themselves, meaning there are different groups for administrators and faculty. Pringle said these groups are not public knowledge.

“We’ve used them for several years, and we’ve also used an external consultant to check to make sure we have the right institutions on the list,” Pringle said. “They’ve been pretty stable for a while, actually.” 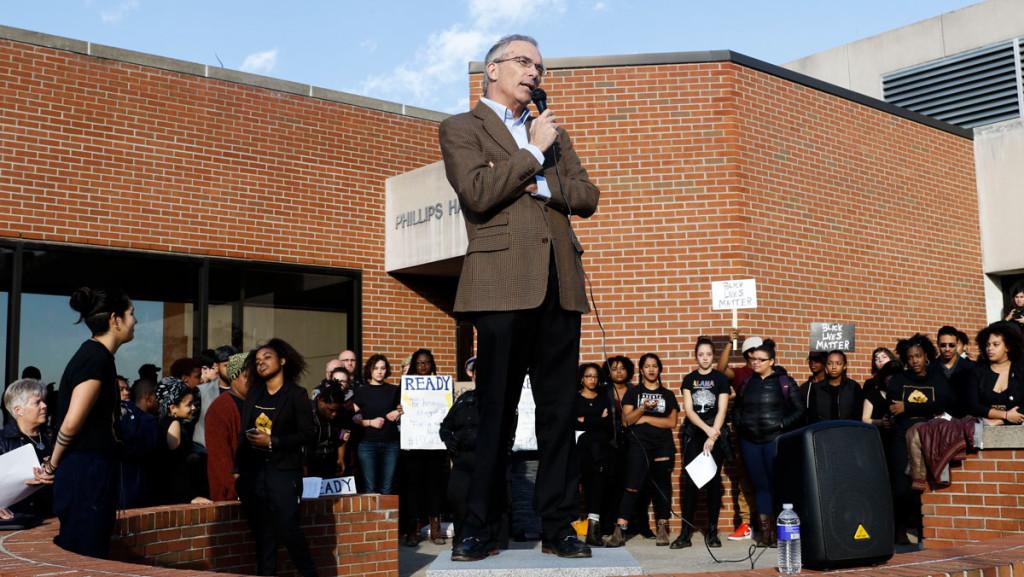 Ithaca College President Tom Rochon speaks at a People of Color at IC walk-out rally Dec. 11, 2015, after being called up to Free Speech Rock by protesters. Yana Mazurkevich/The Ithacan

Student services expenses include all support for students outside the classroom. Institutional expenses are mostly facilities, and auxiliary expenses are self-generating or self-supporting services such as the Bookstore, meal plans and kiosks.

Peter Rothbart, professor of music theory, history and composition and chair of Faculty Council, said it was not his place to comment on executive compensation. However, he did say the average faculty salary had recently fallen below the median in the private peer groups used by the college, which he said makes it harder to attract diverse faculty.

“As more and more schools are trying to increase the diversity of their faculty, it increases competition for those same faculty, and it becomes difficult for a school like Ithaca,” Rothbart said. “Because of our location and our limited resources, it becomes difficult to recruit diverse faculty. This is not a new issue. This has been an ongoing issue, and it’s an ongoing problem for which there are no immediate answers.”

Overall, Hector said he believes the system for determining administrators’ and faculty members’ salaries is working well. He mentioned there has been a greater focus on reviewing employees’ performance in determining salaries, and this is a step in the right direction.

“We’re not different from anyone else that’s trying to retain its current talented faculty, staff and other individuals,” Hector said. “So I think we are on the right path. It just needs more refinement.”

Rochon is set to retire July 1, 2017, after announcing his resignation Jan. 14 following a semester of protests led by the group POC at IC and student and faculty votes of no confidence. The search for his replacement is set to begin Summer 2016. Pringle said she did not know if votes of no confidence by students and faculty would affect Rochon’s 2015–16 compensation. She said the starting salary of the new president will be based on a number of factors, and the board of trustees will handle the matter.

According to David Maley, senior associate director in the Department of Media Relations, Rochon had no comment because he is “not an appropriate person to comment on his own salary.”