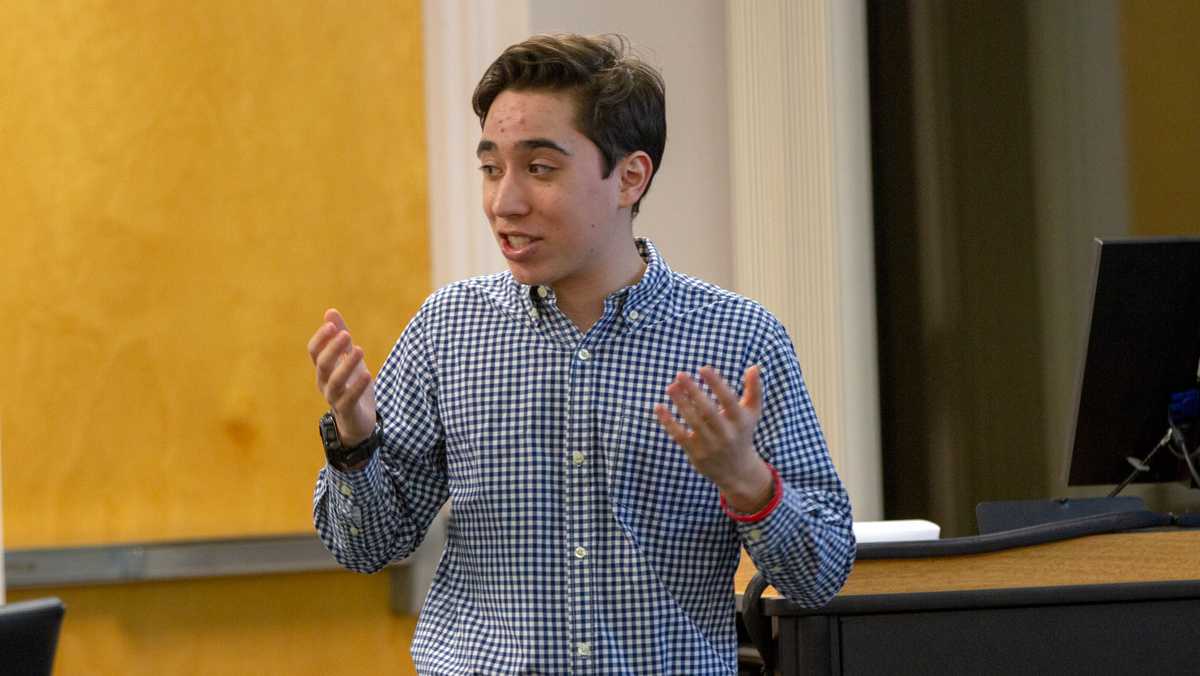 Maxine Hansford/The Ithacan
Junior Elijah Nishiura, vice president of campus affairs, asked sophomore Ryan Ingerson what questions he would ask Bill Guerrero, vice president for finance and administration, who the SGC plans on bringing in this semester. Ingerson said he would ask about the strategic plan, Ithaca Forever, and how it relates to the college’s plans to diversify where it receives funding.
By Sam Haut — Senior Writer
Published: February 26, 2020

The Ithaca College Student Governance Council confirmed sophomore Ryan Ingerson as Class of 2022 senator and tabled a bill to reinstate Late Night at Terrace Dining Hall in its Feb. 24 meeting.

Ingerson discussed his concern with the lack of transparency between the college administration, faculty and students when it comes to the budget. He was confirmed with a vote of 8–3.

“They encourage disclosure on paper, with participation and having people actively debate, but they hide the actual information that’s being put out and the decisions that are being made behind giant blocks of text,” Ingerson said.

Junior Elijah Nishiura, vice president of campus affairs, asked Ingerson what questions he would ask Bill Guerrero, vice president for finance and administration, who the SGC plans on bringing in this semester. Ingerson said he would ask about the strategic plan, Ithaca Forever, and how it relates to the college’s plans to diversify where it receives funding.

During the discussion on whether to confirm Ingerson, sophomore Senator-at-Large Sebastian Chavez said he is concerned that Ingerson is unaware of the issues facing people of color at the college because he did not mention the topic in his presentation.

Senior Alex Perry, varsity athlete senator, asked Chavez if he would have felt the same if Ingerson was a person of color.

“Sebastian, I want to challenge you a little bit,” Perry said. “Yes, I get that that wasn’t his main platform presentation, about supporting the POC community. But also, would you have had that same issue with him if he were to have been a person of color? … He had two minutes, and I don’t necessarily think it’s fair to judge him on the fact that he didn’t get on everything related to POC because his presentation was clearly focused on transparency and financial issues, which I think is applicable to anyone, no matter their race.”

Chavez said that regardless of what position someone is representing, he thinks there needs to be a discussion around what someone will do for the students of color community.

“If we’re going to go to put a step forward from here on out, I feel like that needs to be in the discussion all the time,” Chavez said. “[The] POC community is a minority. We’re never represented fully. … That’s my thing — you have to support POC. POC is not unique to everyone all day, but we always get left out. I wish he included that because how can we just ignore that then we just go right back into the cycle of things, right?”

In its Feb. 17 meeting, the SGC did not confirm junior Brandon Galione for Roy H. Park School of Communications senator because Galione was unaware of issues with microaggressions that have been occurring on campus. After the meeting, freshman Henry Wade, Class of 2023 senator, sent a letter stating his resignation from the SGC. However, at the Feb. 24 meeting, Wade was present.

The SGC also held an executive session, which restricted the meeting to only members of the SGC, for approximately one hour in which they discussed issues of diversity.

The SGC also tabled a bill that would recommend that Terraces, which closes at 9 p.m., reinstate Late Night dining and stay open until midnight because students in the Department of Theatre Arts and the School of Music have classes that end after 9 p.m. The SGC voted 8–1 to table the bill.

While the senate agreed it is an issue that the only late–night dining option available for students is the Towers Marketplace, which is a retail dining location, senators also voiced concerns about the financial feasibility of reinstating Late Night.

The SGC voted to table the bill until March 16 to give Ruffino and Madeya time to talk to people like Guerrero, Scott McWilliams, director of Ithaca College Dining Services, and Terraces Manager Cecil Malone.