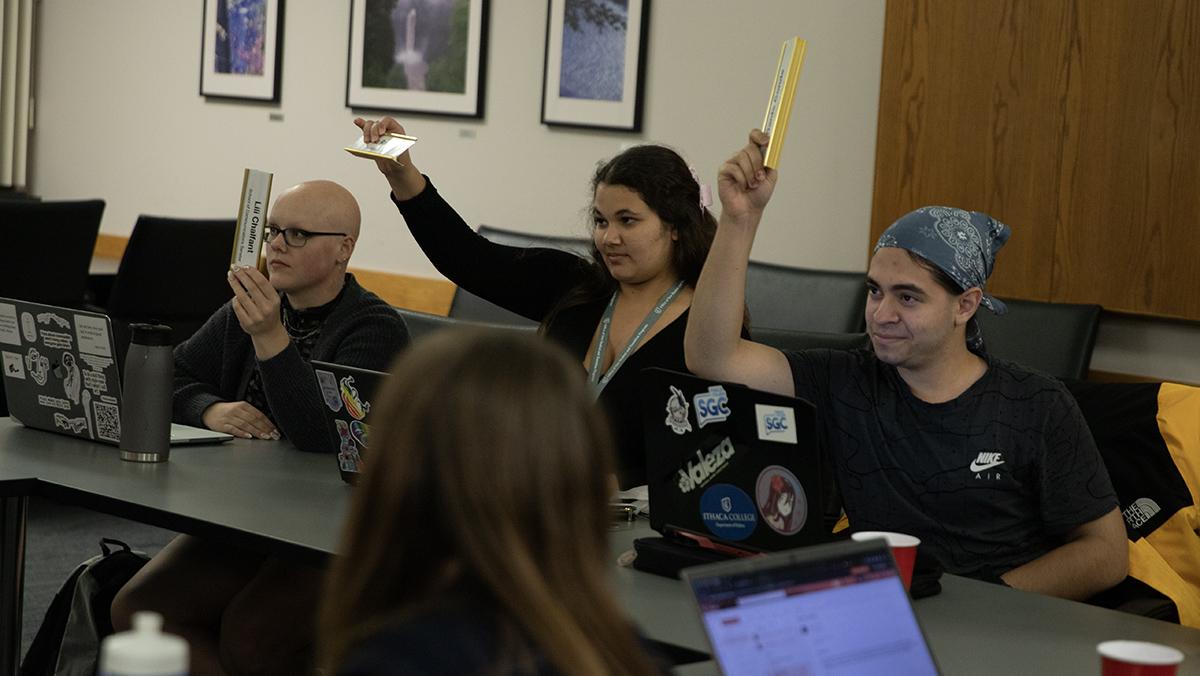 The Ithaca College Student Governance Council (SGC) held a bill writing workshop at its meeting Nov. 7 following a discussion with representatives from the Office of Information Technology (IT).

Weil said that since Sept. 12, Apogee has updated its wireless controllers and upgraded the college at its colocation site — a location storing data from different schools — to have enough capacity for all the students and staff to use their devices on campus as they please. At the beginning of the semester, students had issues with Apogee’s Wi–Fi connectivity because Apogee did not test the updates made over the summer.

Kendall said Apogee is looking for assistance from the student population by offering a paid network technician internship position to students each semester. This is the first time Apogee is running this program at the college. Kendall said Apogee is looking to provide a better connection between the students at the college and the software company. In this effort, Apogee is also looking to sponsor student organizations by providing funding in exchange for more direct and consistent feedback on their services from students.

“Some of the requirements would be that you send out surveys to other students and kind of be the canary in the coal mine and let them know if [internet issues] seem to be widespread issues or singular issues,” Kendall said.

Linskens gave updates on Canvas use and said all students are enrolled in a resource course that incoming students were required to go through as part of their orientation, but the college has received feedback from students that the course was overwhelming. IT will be introducing a new module that will sit in every course with simple and direct information in place of the student resource course. Linskens said she is open to feedback on how this module can be more effective.

Linskens said IT at the college has a survey available until Dec. 5 to gauge students’ attitudes toward technology on campus. She said IT’s goal is to have 15% of the student body fill out the survey.

“We have issued this survey in the past,” Linskens said. “A lot of the feedback that we got from that survey was really what helped drive the changes with the learning management system as well as making other improvements and changes elsewhere.”

“[Viggiani] sent a very lovely email,” Madeya said. “I hope you know he’s very grateful for his experience on SGC, he has a lot of respect for all of you, so there’s no hard feelings there.”

Following Madeya’s announcement, senior Lila Weiser, chief of staff, led a workshop on bill writing. There are 10 new members of the SGC this semester that have never written a bill before out of 20 total members. The senators split into two teams and were each given a prompt by Weiser to draft a bill on, one on providing puppies to all students, the other on building a spacecraft on campus. The teams conducted research on their issues, drafted mock bills to resolve and practiced presenting their bills.

Following the workshop, the SGC executive board gave their officer reports. Madeya asked the council to spread the word on the Cortaca Viewing Party that the SGC is hosting from noon until 4 p.m. Nov. 12 in Emerson Suites in the Campus Center.

First-year student Rishabh Sen, vice president of campus affairs, updated the council on the Campus Affairs Committee meeting and his meeting with Bonnie Prunty, vice president of Student Affairs and Campus Life. Sen said that in the campus affairs committee meeting, two major issues that were identified were getting better lighting at the staircase that leads from the Gannett Center to the Towers residence halls and upgrading the drinking fountains in the residential buildings on campus.

Sen said Prunty wants to begin a workgroup initiative in response to the swastikas and hate symbols on campus with representation from different organizations on campus. Sen said another initiative Prunty wants to work on is an allyship coalition where members of different student groups work together, starting with sending out a statement about the acts of hate on campus.

“[The Office of Student Affairs and Campus Life] want[s] one representative from SGC and one from [Hillel at Ithaca College],” Sen said. “So they really want to highlight that this is a problem for students in general and not just Jewish students.”