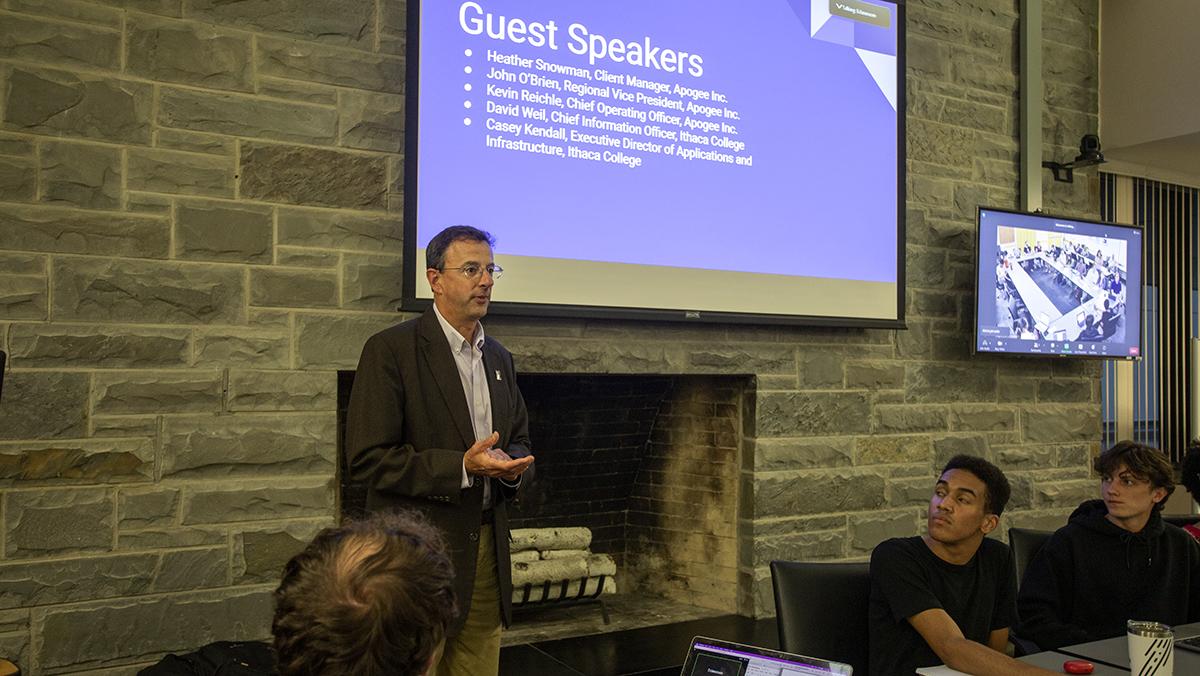 Executives from Apogee, Ithaca College’s internet provider, traveled from Austin, Texas, to attend the Ithaca College Student Government Council’s (SGC) weekly meeting Sept. 12, accompanied by representatives from the Office of Information Technology (IT) to discuss issues with the residential Wi-Fi.

Before the meeting began, a moment of silence was held for sophomore Shea Colbert, who died in a car accident Sept.10.

“On behalf of myself, and the rest of SGC, we extend our condolences to Shea’s family, friends and everyone whose life he touched,” sophomore Noah Richarson, Class of 2025 senator, said.

Apogee runs residential networks for about 400 colleges and universities, provides services for over a million students in the United States and has been working with the college for the past 20 years, providing residential network services. Since the start of Fall 2022, many students at the college have been dissatisfied with Apogee’s residential hall network (ResNet) because of problems like not being able to connect their devices.

“We’re disappointed in how this went,” Reichle said. “We’re disappointed that this erodes trust in Apogee. We really pride ourselves on providing an excellent experience for students because we were all students and we understand that Wi-Fi is like water and oxygen these days. It’s vital to how you guys learn, how you succeed and where you want to go.”

Snowman said the issues with the Wi-Fi were a result of implementing new updates without going through Apogee’s typical process. She said Apogee usually tests all upgrades at volunteer campuses. Snowman also said Apogee did not have the full equipment ready and thought it would be OK to install just a portion of the equipment. The network upgrades include a personal-area network, letting the user’s devices communicate data through connections like Bluetooth, Ethernet or Wi-Fi; single sign-on, which allows students to connect using their college credentials; and the Apogee ResNet app, a platform where students can quickly connect to the Wi-Fi, manage devices and access Apogee support all in one place. Currently, the app has two stars on Google Play and 1.3 stars on the Apple store. Snowman said the low ratings are due in part to the app being launched in May 2021 and still going through bug fixes.

“In hindsight, [updates without testing] was not the greatest decision because we didn’t follow our normal process,” Snowman said. “We really apologize for how things went. It’s not our typical process. It’s not how we want to do business, but we are doing the best to learn from the experience and make sure that we pay attention to all the things that went wrong and do better next time.”

In an October 2021 article by The Ithacan, students reported having issues connecting to Apogee’s network because of a broken fiber optic cable in Hilliard Hall. Other student complaints were about the slowness of the network itself. According to The Ithacan, in 2013 and 2014, Apogee updated the wireless network across campus as a result of continued dissatisfaction from students and faculty. The Ithacan also reported the college considered not renewing its contract with Apogee when the term was set to end in August 2014.

“In full transparency, Ithaca College was not consulted about [updates without testing],” Weil said. “We need a partner. We think Apogee is the way forward, there’s no question. There are struggles. As I said, we are holding them accountable.”

Senior Senate Chair Austin Ruffino asked Apogee why there are different Wi-Fi networks for residential halls and all the other buildings on campus.

“Sort of throughout that whole process [of setting up ResNet], I actually never had issues with the Ithaca College network,” Ruffino said. “I guess, I don’t know if it was different sets of equipment or different protocols.”

Kendall said Apogee is only responsible for ResNet and IT has its own equipment and manages the Wi-Fi in all academic and administrative buildings.

“We connect [Apogee’s] equipment to ours to rebroadcast the Apogee network,” Kendall said. “So, while you probably were really good on the college piece, [Apogee’s] was the equipment that was changed.”

Sophomore Hannah Ahmed, Class of 2025 senator, asked Apogee if they thought the upgrades were worth the issues that followed. Snowman said there would have been a better outcome if Apogee had waited for the full equipment upgrade to add the new services.

“But, I think now, knock on wood, that the issues have been smoothed out, hopefully you’ll be able to enjoy the new features while we’re waiting for the equipment upgrade,” Snowman said.