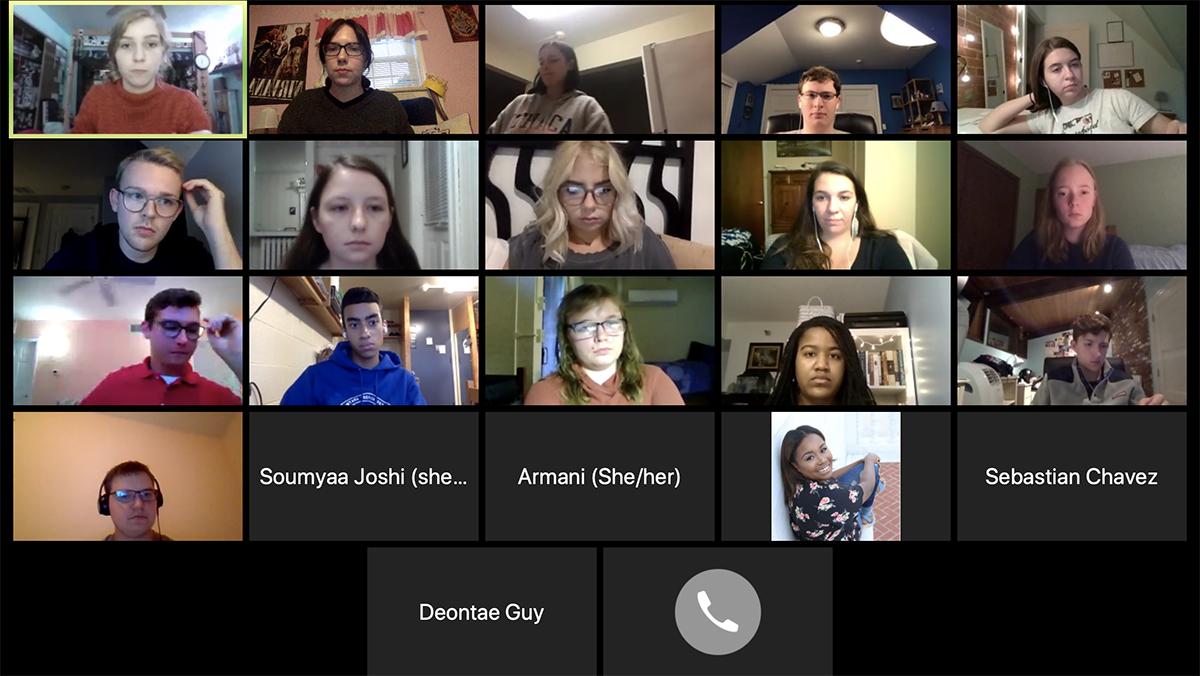 The Ithaca College Student Governance Council passed four bills at its Sept. 14 meeting, two of which are focused on garnering responses from the college’s administration on issues that have received public criticism from students.

The SGC unanimously passed the Fall 2020 Tuition Transparency Request Bill with a vote of 11–0. The recommendation was sponsored by sophomore Austin Ruffino, senator-at-large, and co-sponsored by senior Senate Chair Abigail Murtha and sophomore Antara Sen, former senator for the School of Humanities and Sciences.

Ruffino said that the sponsors of the bill had been hearing complaints from students who wanted the SGC to release a statement regarding the cost of tuition for the fall semester. Since announcing that classes for Fall 2020 will be held remotely, the college has stated that it is not reducing its tuition for the semester. For the fall semester, the cost of tuition is $23,305.

“It is our responsibility to do everything that we can try to do to serve our constituents as our positions are required,” Ruffino said. “We thought it was important to forward [the students’ request] to the Senior Leadership Team because we have this medium that we can sort of reach directly to them.”

The bill recommends that the information is released to students and families on the Return to Campus website and emailed directly to the SGC, so the SGC can relay the information to students. The bill asks the college to respond to the request for tuition transparency on or before Oct. 2.

The 60 Calendar Day Title IX Recommendation Bill, a recommendation that was sponsored by senior Jasmine Morrow, Class of 2021 senator, and co-sponsored by Murtha, was unanimously passed with a vote of 9–0. Two senators left the meeting by the time this bill and the Constitutional Resignation Policy Amendment were presented.

Like the Fall 2020 Tuition Transparency Request Bill, the 60 Calendar Day Title IX Recommendation Bill aims to represent the concerns of students who are calling for the Title IX office to make changes to its policies after the U.S. Department of Education enacted changes to Title IX. Students created a petition with eight demands calling for the college to respond to the new changes, including the request to establish a time limit of 60 days for sexual misconduct investigations. The college sent a message to the college community with its response to the new changes, but it did not establish the 60–day limit.

The bill recommends that the college’s Title IX office releases a statement that is accessible online and begins proposals regarding Secretary of Education Betsy DeVos’ changes to Title IX, as well as outlining a 60–day calendar time limit for resolution of Title IX cases.

“As of right now, there is no time limit [on the cases], so they could basically just go on forever if they wanted to,” Morrow said.

The Constitutional Resignation Policy Amendment was also passed unanimously with a vote of 9–0. The amendment added a subsection to the SGC Constitution in Article IV, Section VI, Subsection IV allowing both senators and executive board members to resign at any time.

A letter of formal resignation must be sent to both the senate chair and president and cannot be withdrawn. Following the submission of the letter, the senator or executive board member will be immediately removed from the Senate and can elect to give an exit interview.

Anyone who wishes to rejoin has to adhere to the policies for seat vacancies. To fill an empty position in the Senate, a student must submit an election packet to the senate chair, have their packet approved by the senate chair and the Office of Student Conduct and Community Standards and then be approved with a two-thirds vote in the Senate. To fill a vacancy on the executive board, the board members will advertise the position, create an application, interview candidates and select one to be approved with a two-thirds vote by the Senate.

The SGC also passed the Rent College Pads Recommendation with a vote of 10–0, with one abstention. Sponsored by Ruffino, junior Maxwell Powers, senator-at-large, and co-sponsored by senior SGC President Connor Shea, the bill recommends that the college, specifically the Office of Residential Life, should partner with Rent College Pads, a company that works with college students and local landlords, to find suitable housing off campus near the college.

Powers said the Rent College Pads website offers a tailored search for students who can input their price ranges and specific details, like how many bedrooms or bathrooms they want.

“A lot of people, when they’re renting on campus or off campus, it’s their first time really doing any real type of major business deal,” Powers said. “So it’s really helpful to have this central location to keep all of the information available for students who are looking to live off campus.”

The SGC unanimously confirmed sophomore Grace Madeya as the new vice president for business and finance with a vote of 11–0. Madeya, former Class of 2023 senator, ran on the platform that mainly focused on her past involvement with the Appropriations Committee — the group that provides student organizations with funding — and her familiarity with allocating funding.

Sophomore Henry Wade, former Class of 2023 senator, was elected to the position of vice president for business and finance as part of the IC Power slate April 25. However, Wade resigned from the position over the summer and transferred from the college. Junior Ryan Ingerson, former Class of 2022 senator, served as interim vice president for business and finance in Wade’s place.

Madeya said that she would like to host workshops and create videos explaining the funding process to student organizations. She also explained her idea to create a job fair in the spring so students can become more aware of jobs that are offered on campus. Currently, students can access the job database on IC HR Cloud.