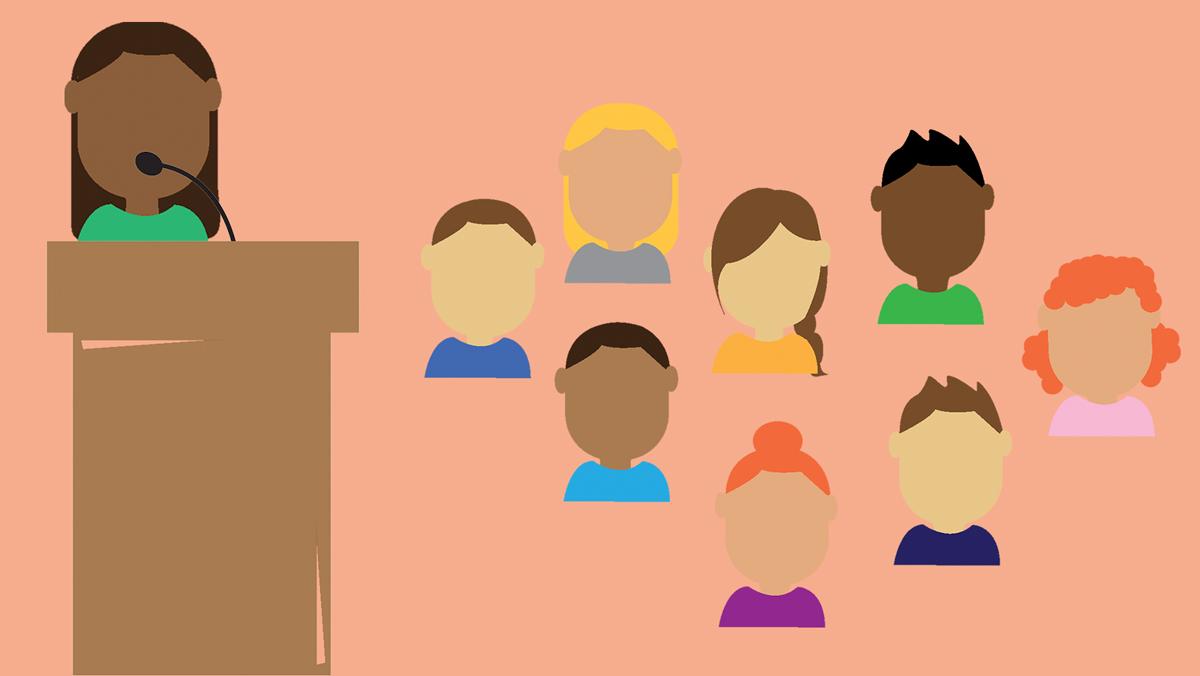 Photo Illustration by Maya Rodgers
The Student Governance Council has experienced a decline in voter turnout and the number of senators. Going into the Fall 2018 elections, the SGC is looking to fill 19 senate vacancies.
By Laura O'Brien — Assistant News Editor
Published: September 13, 2018

A disconcerting trend has been manifesting at Ithaca College: Fewer and fewer students are voting in Student Governance Council executive board elections, and senate vacancies are becoming more common.

A variety of possible factors could have contributed to this drop in student engagement with SGC. Many SGC executive board positions have run uncontested, which may cause apathy toward voting in elections. This political apathy may also be cultivated by a feeling that the campus climate has improved. Additionally, a lack of interest in getting involved could be derived from students not feeling represented by the SGC.

W.H. Oxendine Jr., executive director of the American Student Government Association, said the national average of voter turnout for student government elections ranges from 15 to 20 percent, based on data collected by the ASGA.

Student engagement in the past

The current historically low levels of engagement with campus politics come three years after the biggest protests the college has ever experienced — many of which were led and organized solely by students. One of the largest demonstrations in Fall 2015, led by the student group POC at IC, which stands for People of Color at Ithaca College, was attended by over 1,000 students, which is over 13 times the number of students who voted in the last race for SGC executive board. Approximately 6,900 students attended the college that year.

The organization POC at IC, was formed in response to the administration’s lacking response to several racially charged incidents on campus approximately three weeks prior to this demonstration. During that same month, the SGC executive board organized a vote of no confidence against former college President Tom Rochon. A total of 54 percent of the student body responded to the vote. Ultimately, 71.75 percent of the students who responded to the survey said they had no confidence in Rochon, and the SGC executive board presented the results to over 300 students in Emerson Suites. Rochon announced his retirement a few months later.

“By the time the Student Bills of Rights was passed, that room only had 50 people in it compared to 300 and some it had before,” Recckio said. “I think that’s really indicative too, even in the craziest, most intense times, students didn’t want to engage as much with the policy or the outcomes.”

In the 2015–16 SGC executive board race, 18.9 percent of the total student body voted in the election, which had five full executive boards running for the position. 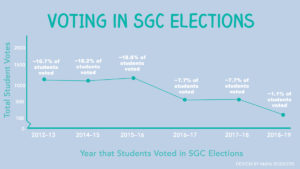 In the Spring 2018 SGC election, only 1.1 percent of the student body voted in the uncontested race for executive board.

The most significant drop in student engagement with the SGC occurred in 2016 following Rochon’s announcement of his resignation that January. During Spring 2016, the SGC struggled to meet quorum — the minimum number of senators needed to vote on bills — three meetings in a row. The 2018–19, 2017–18 and 2016–17 executive boards all ran unopposed, and voter turnout dropped sharply. In 2016 and 2017, voter turnout for the executive board race was 7.7 percent of the student body. In 2018, it dropped to 1.1 percent of the student body.

“The bigger problem is that they’re not seen as effective,” Oxendine said. “When you’re effective, and you have influence, and you ultimately have power, people want to be a part of that. … Low voter turnout is an indicator of a big problem. … Voter turnout is the proof that you really are representative. If you’re at 1 percent, you’re not representative. You’re a club.”

The current SGC executive board, elected in Spring 2018, ran on a platform that emphasized student and senate engagement as a priority. Senior Kylee Roberts, SGC vice president of communications, said the executive board plans to increase student awareness about the upcoming fall election primarily through social media.

“We feel like we’re not really on a lot of people’s radars, which was a big part of our campaign going in,” Roberts said.

The official SGC Facebook page has received 1,005 likes since its creation in 2010. There are 6,769 students enrolled at the college currently. The page’s most recent post, created Sept. 5, advertising the organization’s upcoming Fall 2018 election, currently has no likes as of Sept. 9. A similar post on the organization’s Twitter page also has no likes or retweets.

The dip in student engagement with SGC could also be partially influenced by increased student satisfaction with the college and administration, Recckio said. The college had a positive reaction to Rochon’s successor, current college President Shirley M. Collado. Collado was announced as president in February 2017 and began her tenure in July 2017. Senior Carlie McClinsey, SGC president during the 2017–18 academic year, also expressed this sentiment and said this trend could be an indicator of an improved campus climate.

Oxendine said that in his experience working with student government, he has seen the opposite effect from a shift in upper–level leadership. Usually, during the first few years, a “honeymoon” phenomenon occurs, during which student government organizations collaborate with new administrators and pique the interest of the student body, Oxendine said.

Just as Recckio and McClinsey said decreased student engagement with SGC may be at least partially a result of an improved perception of the college, Michele Lenhart, director of the Office of Student Engagement, said this may also affect the number of uncontested races. Students will not be as motivated to run for SGC positions if they aren’t as concerned about the direction of the college, which in turn directly impacts student voter turnout, Lenhart said.

“The voter turnout for SGC elections has been directly related to the number of people running for office,” Lenhart said. “In my opinion, if more students run for the open positions, the elections will attract more voters and be a better representation of the students’ voices.”

Sophomore Tiffany Daniel-Ramsey said she was not aware of the Spring 2018 election, but even if she had been, the large number of uncontested candidates would have dissuaded her from voting.

“There’s no point for me to vote if there’s only one person running — we know they’re going to win by default anyways,” Daniel-Ramsey said. “If there was another candidate or a couple of other candidates, maybe I would’ve voted.”

Even beyond the engagement of the larger student body, the SGC has also struggled to attract and maintain engaged senate members. 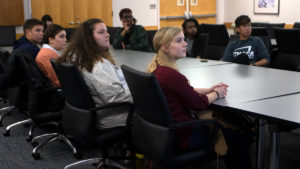 Students running for senate positions presented their platforms Sept. 10. Voting is open to all students from Sept. 12 to Sept. 14. (Maxine Hansford/ The Ithacan)

The SGC holds two elections per year — one in the late spring and another in the early fall. The executive board is always elected in the spring election along with some senate positions. Additional senators are elected to fill any vacancies the following fall.

With the current vacancies, the SGC has 4 senators out of 24 total positions. There is no specification in the SGC constitution on the minimum number of senators needed to hold a meeting or pass bills.

Senior SGC President Alyse Harris said the current executive board is not concerned about the possibility of a significant number of senate vacancies following the fall election because issues of meeting quorum have been resolved in the past. As stated in the SGC constitution, a quorum is two-thirds of the total senate body. If none of the senate vacancies are filled during the fall election, the SGC would need seven senators for any voting to occur during a meeting.

“We haven’t really been thinking about what would happen if nobody ran because that wouldn’t be a positive mind state to be in,” Harris said. “We’re really hoping to get a lot of really awesome engaged people, and if it came down to it we would look into the policy on that … but it really rarely comes up because we are always able to make quorum and get enough people participating.”

Harris said these populations that often do not have a senate on the SGC can still be represented by other senators who may overlap in their roles on campus. For example, even without a graduate liaison, graduate students may be represented by a senator within their schools.

“Certain senate positions may be consistently unoccupied because of the responsibilities already expected of these populations prior to joining SGC,” McClinsey said. For example, students such as varsity athletes often have schedules and obligations that conflict with the expectations of SGC senators, who must not only attend weekly meetings but also join at least two campus committees.

“We don’t really see any of the campaigns or anything like that,” Bailey said. “We don’t see any effect, which is why I haven’t been super interested in it.”

Senior Morgan Gjoen said she does not have a full grasp of the purpose or significance of SGC and its role on campus. Gjoen did not vote in the Spring 2018 election and was not aware that it occurred.

“I feel like I don’t really know what the student governance, whatever it’s called, is” Gjoen said. “I feel like I get a lot of emails, and I’m kind of just like, whatever. It probably impacts me, but I don’t see it impacting me. I have so many other things to worry about — like the lack of actual presence of it is why I didn’t feel the need to vote.”

SGA to initiate student vote of no confidence in Tom Rochon