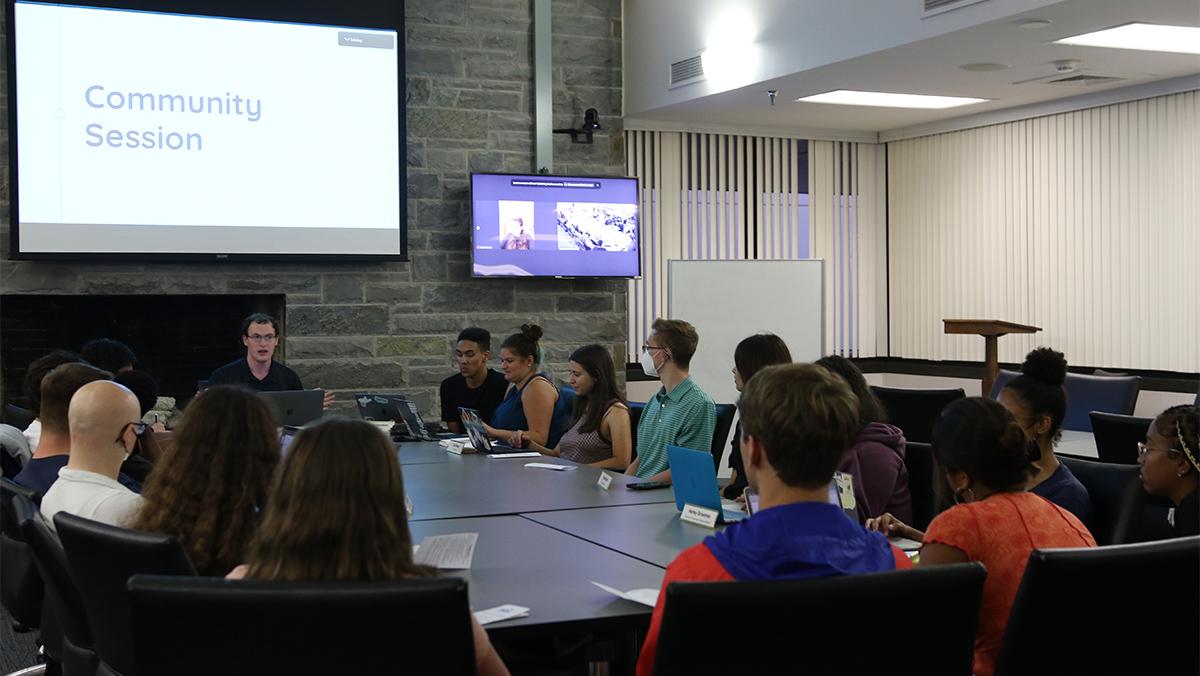 The Ithaca College Student Governance Council (SGC) had its first meeting of the 2022–23 academic year Aug. 29 where it introduced all new executive board and senate members, discussed the fall elections and talked about ongoing student concerns.

The Fall 2022 elections for first-year students interested in running for the SGC executive board and senate positions begins Sept. 4. The executive board has three open positions: the vice president of communications, the vice president of campus affairs and the student liaison to the Alumni Board — but the liaison is appointed ex-officio by the Alumni Associations Board. During the 2021–22 academic year, junior James Zampetti was the vice president of communications and ran for the position again in the Spring 2022 elections. Senior Senate Chair Austin Ruffino said that over the summer Zampetti transferred to the University of Rochester. Ruffino also said the candidate who was elected in the spring to the position of vice president of campus affairs, senior Soumyaa Joshi, stepped down for personal reasons over the summer.

Sarah Boniche, associate director of Student Involvement for the Office of Student Engagement, introduced herself as the new adviser for the council. She worked as a residence director in the Lower Quads from July 2018 until March 2020, according to her Linkedin account, and returned to the college during summer 2022 to begin her new roles at the college.

The election packet is due Sept. 7 and those running will be able to campaign from Sept. 9–16. The council will host a platform presentation night Sept. 13, where candidates can pitch their campaign points to students. Ruffino said via email that all candidates are required to have two endorsements, rather than signatures.

Voting for the fall elections will occur during Sept. 14–16. Students will be able to vote for the open SGC positions via online voting forms available on IC Engage. “We are going to be trying something new,” Ruffino said. “We’re going to be actually having a table set up at the Campus Center where people can come and vote and get maybe a sticker and candy. Something like that.”

Some senators get creative with their campaign strategies. Sophomore Noah Richardson, Class of 2025 senator, said he utilized Instagram in Fall 2021 when he first ran and again during the Spring 2022 elections.

“[During] my freshman year, [my class] had this [Instagram] confessional page where you could submit a Google form and say things,” Richardson said. “Me and another senator [direct messaged] them and we asked them to put our [campaign] post up on their story.”

The SGC discussed issues that have impacted students so far this semester like internet problems, complaints about dining hall food, tuition increases and mail delivery delays. Ruffino said the SGC is not about directly solving the issues, but interacting with the people who can.

“We are the bridge between students and people who can [solve problems],” Ruffino said. “[When writing bills], you do research, you connect with people, you submit it. We can’t tell the school, ‘You need to do this’ because it’s not within our control, but a lot of the conversations that we have while writing those bills leads to change.”

Past bills, also referred to as “initiatives,” have included an employee vaccination recommendation, improved lighting on campus and a bill to implement at least one gender-neutral bathroom in all academic buildings.

Ruffino said a representative from Apogee, the internet provider for residential halls and apartments on campus, and Dave Weil, chief information officer, are expected to attend the next SGC meeting Sept. 12. The SGC discussed that students have had concerns about the inconsistency of Apogee’s services. Ruffino said Apogee reached out to the SGC to receive feedback from students.

Senior Tessa Kurtz, the vice president of academic affairs, said she is beginning a conversation with the appropriate offices to make satisfactory or unsatisfactory fail classes and adding or dropping classes more accessible.

“We ran on accessibility in academics as an e-board,” Kurtz said. “So one of the things that I mentioned in my platform is I wanted to extend the S/D/F [satisfactory/unsatisfactory] deadline and I am looking toward making that a bill.”