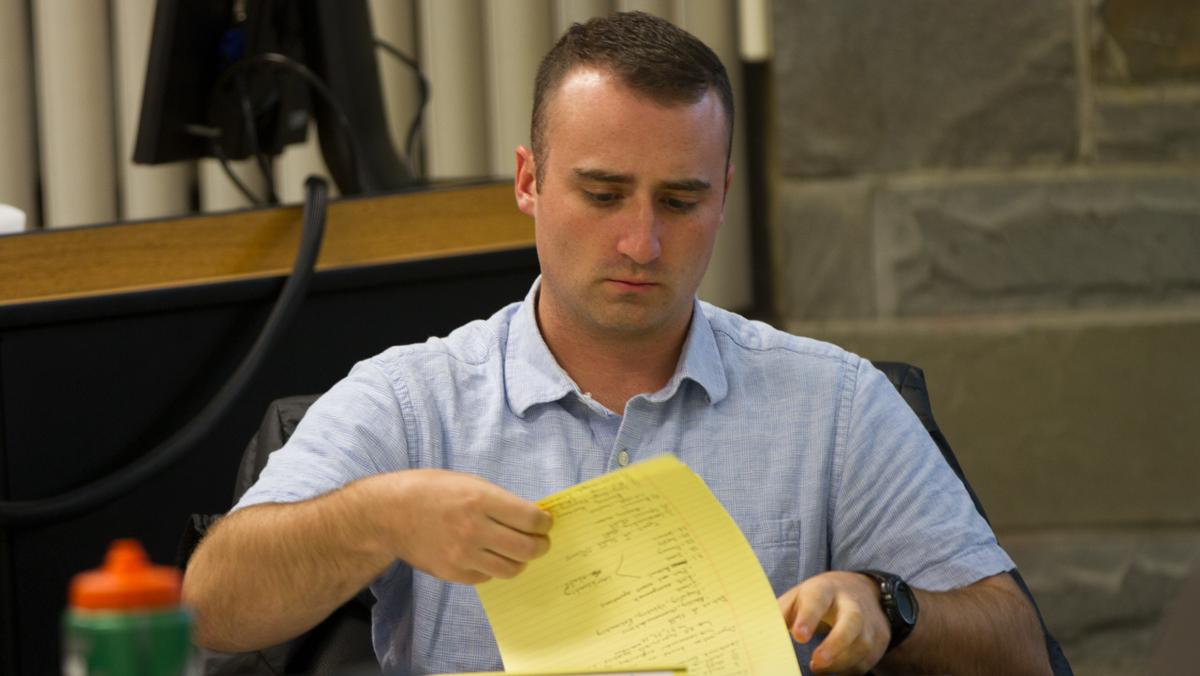 Maxine Hansford/The Ithacan
In his current position as vice president of business and finance, senior Conor Friend is in charge of administering all of the SGC’s financial transactions, including allocations for student clubs on campus.
By Ryan King — Staff Writer
Published: November 1, 2017

At the end of the semester, senior Conor Friend, vice president of business and finance for the Student Governance Council, will resign from the SGC to dedicate more time to his Cornell Reserve Officers’ Training Corps commitments.

Friend first joined the SGC in Fall 2016 as the Class of 2018 senator. During his time in the SGC, he sponsored and co-sponsored six of the 14 bills that passed over the past three semesters. Some of the bills he passed include the International Student Support Bill, Allocations Reform Bill and the Bill Structure Reform Bill.

“Being able to reform the Allocations Handbook, which was kind of a mess, was really rewarding for me,” he said. “My favorite thing we did was pass the International [Student Support] Bill.”

In his current position as vice president of business and finance, Friend is in charge of administering all of the SGC’s financial transactions, including allocations for student clubs on campus.

Last February, while in the early stages of planning her run for the SGC presidency, junior Carlie McClinsey asked Friend to join her ticket as the vice president of business and finance.

“Conor proved himself last year on the Senate…I knew that he was qualified to take on the numbers and accounting end of the role of VP of business and finance,” she said. “It’s sad to see Conor go.”

When McClinsey asked him to be the vice president of business and finance on the executive board she was forming, Friend said that he thought he would be able to commit to both the SGC and ROTC. But being on the SGC ended up being a bigger time commitment than he originally anticipated because, he said, the position included duties he was initially not aware of. As a result, he has not been able to dedicate the amount of time to ROTC as he wants to, he said.

“I think I haven’t been as present as I should be, especially being the cadet battalion commander – I think I owe my fellow cadets more time,” he said. “I absolutely love training the younger cadets, and being able to watch them grow throughout the years … is way more rewarding than anything I’ve done here.”

Friend said the cadet battalion commander is the highest–ranking position in the army battalion that he serves. It is the second highest student position in Cornell’s ROTC program, under the brigade commander, which currently belongs to a navy midshipman — the navy’s equivalent of an army cadet. He said he is planning on commissioning as an officer in the army after he graduates.

McClinsey said she anticipates that the transition from Friend to a new vice president of business and finance will be smoother than previous transitions she experienced during her time on the SGC. She said the changes the SGC made to its constitution last semester simplified the transition process.

“I’ve been on three executive boards now, and every board has unfortunately lost someone on the e-board,” she said. “But I think that the way Conor told me and the amount of advanced notice I got for this departure [will make] this the easiest transition I’ve seen.”

Senior Meredith Husar, vice president of communications, will head the search for Friend’s replacement. She said the applications for the position will be open at some point before Thanksgiving break and Friend’s replacement will be chosen before the end of the semester.

“It’s one of the most difficult positions on the SGC executive board,” she said. “Prior experience in SGC is preferred, but it is open to everyone.”

It is not unprecedented for someone without SGC experience to get appointed to the e-board. Last semester, junior Anna Gardner replaced senior Luis Torres as vice president of campus affairs despite not having previously served on the SGC.