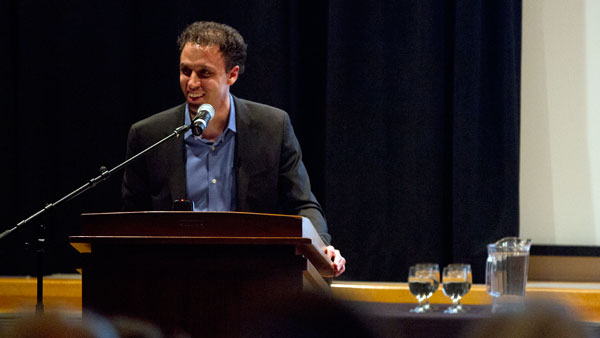 The Park Center for Independent Media honored four journalists for their achievements in reporting for independent media and discussed the impact of independent media on society at the sixth annual Izzy Award Ceremony on April 28 in Park Hall Auditorium.

Nick Turse and John Carlos Frey, reporting fellows with The Investigative Fund at The Nation Institute, shared the Izzy Award for their reports on stories of war crimes and violence on the U.S.-Mexico border, while Glenn Greenwald and Jeremy Scahill became the first inductees into the I.F. Stone Hall of Fame.

Upon the presentation of the award, Turse and Frey gave acceptance speeches, each of which focused on the struggles of independent reporting and the impact their stories have brought to society.

Turse, recognized for his reporting on civilian war casualties from Vietnam and Afghanistan, and for his novel “Kill Anything That Moves,” said many of his reports result from finding the smallest pieces of information unknown to the public.

“While I have never presumed to put myself in the same category as Izzy Stone, I’ve always felt a kinship with him in some way,” he said. “So much of my work relies as his did on scouring publicly available documents to find the tiny tidbits of information that lead to stories.”

Frey, known for reporting on the cross-border shootings by U.S. border patrol agents, talked about the story of the brutalization, deportation and death of undocumented immigrant Anastasio Hernandez Rojas a little more than three years ago.

Frey said after being told there was a witness to Rojas’ death, he requested for help from The Investigative Fund at The Nation Institute to support him in his investigation of Rojas’ story.

He said the story, once completed and fully investigated six months later, was denied broadcast by national media outlets before he got it to air on a small PBS program called, “Need to Know.”

His story resulted in a revision of border patrol protocols and congressional investigation into the use of excessive force by agents. He said he would not have struggled through the investigation and rejection of the report if he didn’t believe the story would have an impact.

“A petition was started, and 16 members of Congress signed the letter … saying they needed to open an investigation,” he said. “As we speak today, 12 border patrol agents are being investigated for possible murder.”

Frey said mainstream media outlets would not play his story because they deemed it irrelevant and upsetting to the audience.

“It would cause backlash. It would get nasty letters from people. They wouldn’t want the controversy,” he said.

Greenwald, an I.F. Stone Hall of Fame inductee, appeared in a prerecorded acceptance speech. In the video, Greenwald defined independent media as a way to share news that goes against what is being shown in mainstream media.

“I think independent journalism is at its core devoted to providing an adversarial force against the greatest, most powerful, political and corporate factions in the nation and in the world,” he said.

Greenwald, who reported stories that exposed the NSA spying scandal, said independent journalism focuses more on the ethos of journalism than on the structure.

“The spirit of independent journalism is defined not so much by the structure, but by the purpose and function of the journalism,” he said. “Mainstream journalists pretend to have these kind of objective rules for what journalism is supposed to be.”

Matthew Honold ’13, who attended the Izzy Awards, said this event inspired him to study mainstream media news through a more critical lens.

“When you read something put up by a major news source, just have that grain of salt and question it before you take it at face value,” he said.

Freshman Leandra Devito, an accounting major, said she would like to see Ithaca College host similar events in the future.

“I just thought it was great, and I hope that Ithaca can do more events like this because it’s really important to get the word out and to support journalism,” she said.

Cohen said the event had a high turnout rate and sparked student interest to use the media to positively influence the world.

“I think a big thing here is to get journalism and communications students, and other Ithaca College students, inspired toward social justice and human rights to making a difference, and I think that happened tonight,” he said.