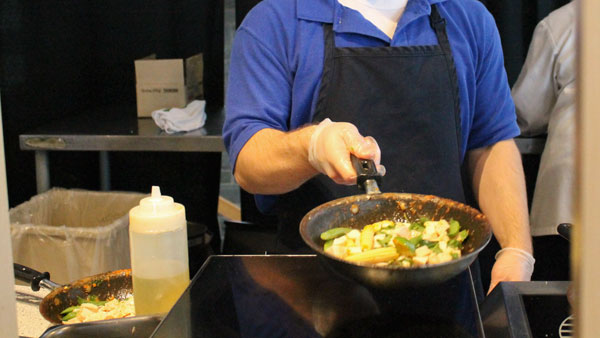 Jillian Flint/The Ithacan
A student worker at Towers Dining Hall prepares a thai dish with chicken. It can also be prepared with tofu, but is made in the same pan as chicken.
By Sabrina Knight — News Editor
Published: April 23, 2014

Sitting down to a freshly cooked meal of lo mein with tofu and vegetables from the Exhibition Station at Towers Dining Hall, a student observed several large chunks of chicken mixed in the vegetarian meal.

Prior to this, the student witnessed unwashed pans reused in between preparing each meal, gloved hands handling both meat and the vegetarian options and the same utensils being used to mix meat-based meals and non-meat meals.

Jeff Scott, general manager of Ithaca College Dining Services, said if a student finds something about the food in the dining hall that doesn’t meet his or her needs, he or she should contact the manager on duty. The manager will assess the situation and determine if an investigation should occur to correct the problem for the future.

Scott also said the dining halls do whatever they can to protect the integrity of their meals. He said student workers are trained to know what kind of food they will be serving on a particular day and are expected to know how to handle a special request if it should arise. However, he said it’s hard to maintain the same integrity in self-serve areas because the staff doesn’t have as much control over the placement of utensils from other students who may unintentionally cross-contaminate without realizing it.

“A little bit of a challenge is where we have self-serve stations where you have a hot line and maybe vegetarian food next to meat or other ingredients,” he said.

This situation isn’t uncommon among the dining halls at Ithaca College.

Freshman Samantha Weil, who maintains a Kosher diet for religious reasons, said she can’t eat from the deli stations in either the Campus Center Dining Hall or Terrace Dining Hall because the students who make sandwiches don’t change their gloves for every sandwich they make. Therefore, they are touching all the non-meat ingredients with their gloved hands that have already picked up meat, thus contaminating her food with meat substances.

“I can’t even get a piece of bread because their gloves have reached in and touched the meat,” she said. “If they reaching in and pick up a piece of bread, the bread is now contaminated; it’s not Kosher.”

A local establishment whose standards the college’s dining services could model is Moosewood, a vegan restaurant in the City of Ithaca. The restaurant also serves fish five days a week. David Hirsch, one of the co-owners at Moosewood, said the restaurant’s cooks must separate utensils for fish dishes and vegetarian dishes to prevent contamination.

“We’re very careful to keep everything separate and to make sure when we’re serving that all the utensils are very clearly delineated as to being just for fish,” Hirsch said.

Hirsch said new employees work one-on-one with an experienced cook at least six to eight times in their supervision to learn the standards of the restaurant. Some of Moosewood’s protocols include having different sets of utensils ready to go and washing everything in a high-heat dishwasher in order to get rid of the residue meat leaves on pans and utensils.

If a customer asks for a special meal that requires a different process in the kitchen, such as gluten-free or allergies, Moosewood tries to accommodate those, Hirsch said. But sometimes it’s difficult to honor every diet without risking contamination, particularly for food allergies.

Weil said she finds it difficult to rely on the Kosher Kitchen in Terrace Dining Hall for her meals, especially with her demanding class schedule, which gives her a limited time for meals in between classes. It’s more convenient to go to Campus Center Dining Hall, she said. Sometimes the Kosher Kitchen doesn’t even have food she can eat, because Weil also doesn’t eat red meat for health reasons. Instead, she said she buys food at Wegmans and stores it in her room to supplement the dining hall on those days.

“That’s really not acceptable when I’m paying for the dining hall fees,” she said. “The dining hall should really be meeting all my dietary needs, whereas most weekends I just don’t eat in the dining halls just because there are such limited options.”

On the weekends, Weil said, she finds it hard to get fully balanced meals because the Kosher Kitchen is closed. She said she is aware that she can order Kosher meals from the Kosher Kitchen ahead of time, but to her they are disgusting, cold and contain food that was cooked days prior.

“They don’t listen to students enough to trust that what you’re saying is truthful for some reason and that you know what you need,” she said. “They seem to think they know better than I do … and it hasn’t made logical sense to me.”