Students march at Take Back the Night after two years online 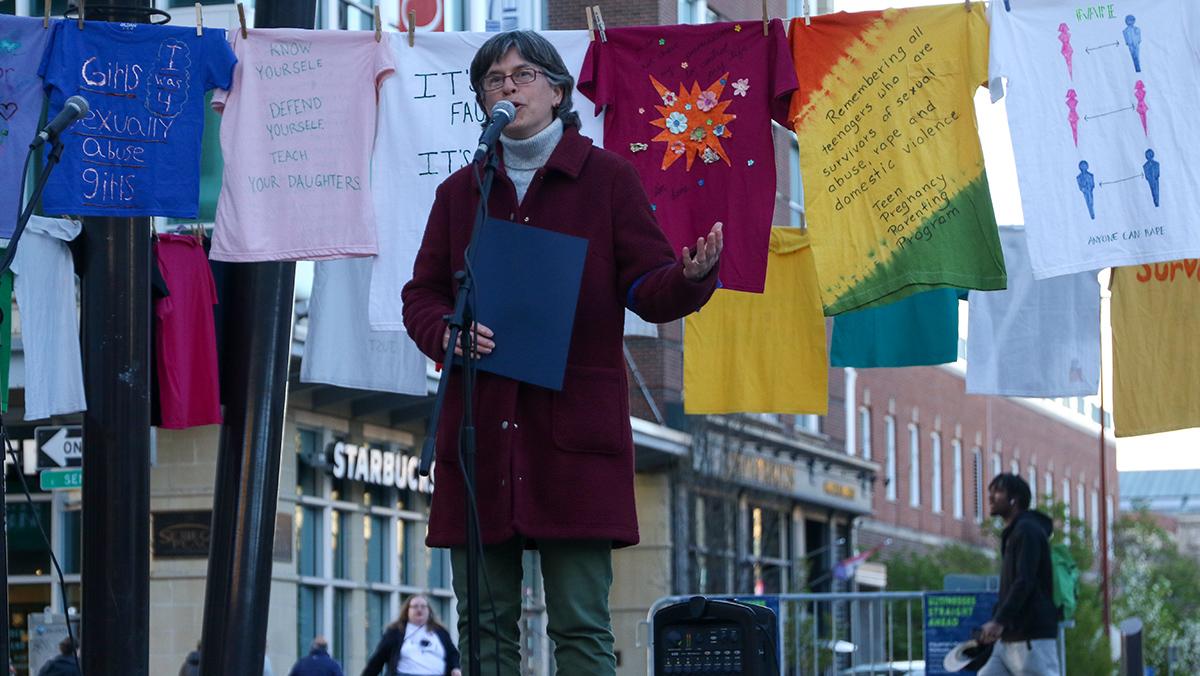 “Claim our bodies, claim our rights, take a stand, take back the night,” Ithaca College students chanted April 29 as they marched to The Commons for the 43rd annual Take Back the Night (TBTN) march and rally in Ithaca.

TBTN is an international foundation and movement against sexual violence, domestic violence, dating violence and sexual assault. The Advocacy Center of Tompkins County has hosted TBTN events since 1979. At the 2022 event, three marches began at 6:15 p.m. at Ithaca College, Cornell University and the Greater Ithaca Activities Center. The marches convened at 7 p.m. on The Commons where about 70 people, from children to older adults, gathered for a rally featuring survivor speak-out sessions, performances and a vigil.

Representatives of IC Strike led the march of about 25 people from Ithaca College to The Commons and provided signs and led chants for marchers. IC Strike is a student organization at the college created to raise awareness, promote change in the campus community regarding sexual assault and violence, and provide support to survivors and allies.

“It’s Sexual Assault Awareness Month, so this is a good way to kind of set off the month but remind people that this is an ongoing issue and it’s not just contained to one month,” senior Sarah Moon, co-president of IC Strike, said.

Sexual Assault Awareness Month is honored in April, and at the college, events were hosted by clubs and campus organizations, including Planned Parenthood Generation Action, the Office of Public Safety and Emergency Management and the Sexual Violence Prevention Committee as well as the Advocacy Center. TBTN was the final event of the month.

Moon said this year’s TBTN event was particularly important because it was in person for the first time since 2019 and has the power to reunite the community toward a common cause. The event was held on Zoom in 2021 and by curating a collection of posts from community members on social media in 2020. As an homage to the event’s return, the TBTN theme was “the power of community.”

Heather Campbell, executive director of the Advocacy Center, said the COVID-19 pandemic put people at greater risk of sexual and relationship violence by isolating them from support systems and isolating survivors with dangerous individuals. Campbell said in 2021, the Advocacy Center received 64% more calls on its hotline and served 30% more survivors across all programs than in 2019.

“The past two years, survivors have also been coming to us with situations that were more urgent, more complicated and more dangerous,” Campbell said. “We initially assumed that we would see the need rise, and then as we moved through the pandemic, we would see things maybe go back to more of what it was before the pandemic, but so far that has not happened.”

According to the Council on Criminal Justice, a study from February 2021 found an 8.1% increase in domestic violence in the U.S. during the COVID-19 pandemic after lockdowns were imposed.

A main portion of the event was the Survivor Speak Out, which gave survivors and allies the opportunity to sign up and share their experiences with the event’s topics. Some survivors  prepared speeches and poetry, while others chose during the event that they wanted to participate. Many presenters shared that they had never been to TBTN before or had never participated in the Survivor Speak Out but felt compelled to share their stories after hearing other survivors.

Speakers and performers presented from the Bernie Milton Pavilion on The Commons, in front of t-shirts made for The Clothesline Project. The Clothesline Project was created in 1990 as a way to publicly oppose violence against women. Naomi Barry, adult community educator at the Advocacy Center, said the shirts were made by local survivors over the last thirty years.

“The Clothesline Project is really a way for survivors to express their experiences of violence and kind of ‘handle their dirty laundry’ and literally be able to hang up their shirts and their experience with violence and turn their backs to it and very much walk away from it,” Barry said.

The shirts mainly featured writing, including “Girls sexually abuse girls” and “I’m as free as a bird and this bird you can not cage.”

Freshman Abbey Hall said she heard about the event at the Planned Parenthood Generation Action club’s Let’s Talk About Sex Party April 22. She said she decided to attend the event because in her own social circles, she has seen sexual assault and unhealthy relationships.

“Personally, I’ve had my own experiences with unwanted attention and affection from men who don’t ask for consent and they don’t establish any sort of guidelines,” Hall said. “I think that a big thing for me is I never had education from my family or my school [on] how to speak up when you feel like you’ve been in a situation where you have been assaulted or where you have been invalidated.”

Sophomore Sophia Testani attended the event and said hearing other survivors speak out about their experiences was her favorite portion of the event. In Fall 2021, Testani was sexually harassed at the college and went through a semester-long process with Title IX. After losing her Title IX hearing, Testani spoke out about her experience.

“Just getting to hear [the survivors’] stories and listening to people who were brave enough to share their stories … was just really empowering,” Testani said.

Attendees were seen throughout the event wearing armbands in purple, which represented survivors, or blue, which represented allies. Event organizers did not explain the color choices, but shades of blue and purple are generally associated with the event’s topics. Purple is associated with domestic violence, while blue represents violence against children and teal represents sexual assault. Sophomore Michaela Berman went as an ally to support Testani and said the event allowed her to feel closer to Testani.

“[Testani] took a purple armband, which was to identify her as a survivor, and she asked me to tie it on her arm,” Berman said. “I started crying, tying it on her, and I was like, ‘I wish this wasn’t what I had to tie on you.’ … And we shared a moment. That’s my big takeaway from that event.”

Laura Lewis, acting Mayor of Ithaca, delivered a proclamation that recognized the power structures that leaves groups vulnerable to sexual violence and the need in the Ithaca community to support survivors, especially those from marginalized groups.

“It is through community that folks creatively support one another and attend to each other’s pain when systems fail, when needs are high and safety is in question,” Lewis said. “And whereas Take Back the Night is a time of celebrations, triumphs and struggles, where all people can support survivors’ strength and courage as we work to change the culture that perpetuates domestic violence.”