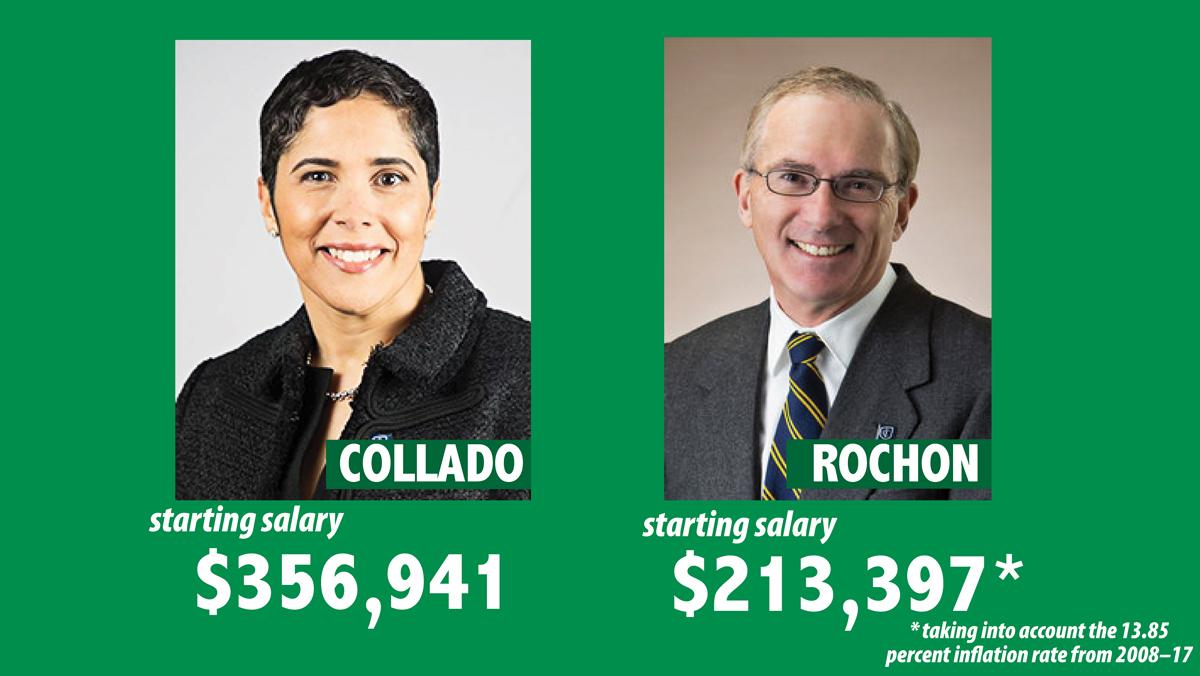 Collado received a total sum of $356,941 from July to December 2017. This year’s federal form 990 filed by the college was released April 16 and applies to the fiscal year ending May 31, 2018. The form includes information about highest paid employee compensation during the 2017 calendar year. According to the form, Collado’s base compensation was $235,410, other reportable compensation was $74,469, retirement and other deferred compensation totaled to $25,000 and nontaxable benefits amounted to $6,062. She also received a one-time transition payment of $25,000.

Dan Bauman, database reporter at The Chronicle of Higher Education, said that over the last 10 years, salaries for college presidents have continued to grow, and is due to the higher education marketplace becoming more competitive. He also said colleges and universities tend to offer higher salaries to create a sense of stability and ensure presidents stay at the institution.

Collado’s starting salary is higher than her predecessor’s, former Ithaca College President Tom Rochon’s, and is indicative of trends in higher education.

Because Rochon was employed until June 2017 and Collado began her tenure in July 2017, compensations for both presidents are included on the form. When Rochon began his position as president in July 2008, he earned a total compensation of $178,568 for the first six months of his tenure, according to the 2008 Form 990. Taking inflation into account, this is equivalent to approximately $213,397 in December 2018. Collado made approximately $143,000 more in the first six months of her tenure as president than Rochon did in his first six months, taking inflation adjustments into account. This number includes all of the reported compensations beyond base salary.

Collado came to the college after Rochon resigned in July 2017 after a semester of protests led by POC at IC and student and faculty votes of no confidence. The protestors were criticizing the administration’s handling of racist incidents on campus. Bauman said that generally, potential presidential candidates may receive higher compensation for coming into a difficult environment.

“Certainly, tougher circumstances can be a good negotiating tactic on the part of a potential college president candidate,” Bauman said. “In order to deal with, potentially, the instability of a president who was forced to retire or his tenure came to a tumultuous end, university boards may feel the pressure to throw in additional compensation … that may be worth somebody’s while.”

Collado also came to the college with previous administrative experience in higher education. Prior to working at the college, she was the executive vice chancellor and chief operating officer at Rutgers University–Newark, vice president for student affairs and dean of the college at Middlebury College and executive vice president of the Posse Foundation, a nonprofit college access organization for students from public high schools and multicultural backgrounds. Before coming to the college, Rochon was dean and provost at Claremont Graduate University and executive vice president and chief academic officer at the University of St. Thomas. Bauman said chief executive roles in higher education tend to have higher salaries for individuals who have been in administrative positions for a long time.

“She’s making a lot of changes to the campus that are benefiting students, faculty and even the future of our campus itself,” Skelly said.

Sophomore Louis Riolo said he thought Collado’s salary seemed normal because she is a high-ranking administrator.

“I don’t think it’s that insane because she is the president of a college,” he said. “With a private institution, where there’s a lot of money coming in and she has to deal with so many things, I think it’s a pretty fair salary.”

Faculty members who The Ithacan has spoken to about Collado’s compensation said they felt like they did not have enough time to read the federal form 990 to adequately comment on the issue.

The 2018 federal form 990 also states that Collado was also compensated for $26,000 while she is living in a private residence off campus. The college is currently building a new president’s home on campus after selling the previous president’s mansion. Maley said this compensation is not being paid to Collado but rather that it is the value the college determined she gained from living in that residence, which must be reported to the IRS as part of her compensation. Collado also received $27,094 due to a gross-up payment — when the gross amount of a payment is increased to account for taxes that will be withheld, essentially to ensure that the employee receives the full amount after taxes — related to temporary housing.

According to the board of trustees’ website, it is typical to see a high compensation figure for the final year of a presidency because it reflects a combination of the year’s salary and accumulated deferred compensation. When former President Peggy Ryan Williams left the college in 2008, she earned $404,950, according to the 2008 federal form 990. Taking inflation into account, this is equivalent to approximately $483,935 in 2018.