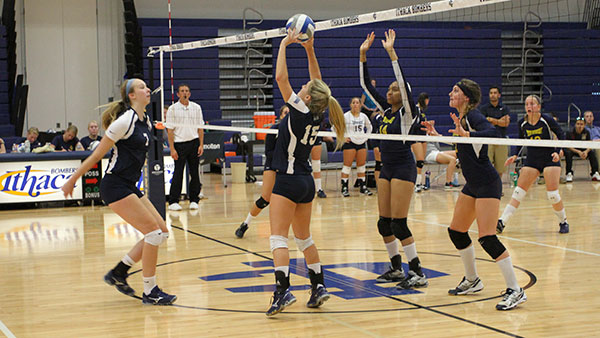 Kait Turkett/The Ithacan
From left, sophomore middle and right side Siobhan Sorensen is set up by junior setter and libero Carly Garone during the volleyball team’s game against Cazenovia College as part of the Bomber invitational on Sept. 5 at Ben Light Gymnasium.
By The Ithacan — Ithacan Staff
Published: September 9, 2014

Last season, seven of the Bombers’ 12 games were decided by eight points or fewer. The Blue and Gold’s tendency toward late-game drama looks likely to continue this season, as the Dutchmen were 9 yards away from stealing a win before junior defensive back Anthony Cugini broke a fourth-and-goal pass from Dutchmen senior quarterback Connor Eck. Head coach Mike Welch said the win was good for the defense’s mental strength.

“They’re a young defense that got put in a lot of tough situations,” Welch said. “To be able to come through with a win and to learn some lessons along the way is really going to pay dividends going forward.”

Senior quarterback Tom Dempsey threw for 222 yards and three touchdowns to lead the Bomber offense, which received a spark from freshman running back Tristan Brown, who rushed for 74 yards on 12 carries.

The Bombers have their bye next week before hosting the Hartwick College Hawks on Sept. 20 at Butterfield Stadium.

In its second game of the season, the men’s soccer team fell 4–1 to Dickinson College on Sept. 7 in Elizabethtown, Pennsylvania.

Sophomore forward Sean Forward scored the Bombers’ lone goal, 12 minutes into the game. However, the Red Devils were able to even the score before the end of the half.

In the second half, three consecutive Dickinson goals sealed the Blue and Gold’s fate. However, senior forward Max Bjork said he believes the team is moving in the right direction.

“The scoreboard might not show it, but we are starting to get in the direction we want to go,” he said.

Hoping to secure its first win of the year, the South Hill squad will play its first home game on Sept. 13 against SUNY Geneseo at Carp Wood Field.

“Our defense is very good at communicating to our midfield and our forwards,” she said. “It helps our offense because it gives us time to force them the other way into the defense.”

The offense held a 9–4 shots on goal advantage over the Rams, who fell to 1–2–1 on the season.

An early goal from junior midfielder Kelsey King gave the Bombers all the momentum they would need. King took a pass and beat two defenders in the box before scoring on the left side. Farmingdale threatened several times throughout the game. Both of the Rams’ corner kicks came in the second half, but were stifled by the Bomber defense.

Meanwhile, Demczar netted the Blue and Gold’s second goal in the 89th minute on a free kick inside the arc. After King was fouled, Demczar took the kick, arcing the ball high into the left corner of the net.

The Rams could not respond, and the Bombers took home their first multi-goal win of the season. The team will return to action Sept. 13 when it takes on the University of Rochester in the SUNY Cortland tournament in Cortland, New York.

The volleyball team had its first home matches of the season as it hosted the Bomber Invitational from Sept. 5–6 in Ben Light Gymnasium. The Bombers played in two matches on each day, splitting each series by going 2–2 over the weekend.

The Blue and Gold opened up the tournament coasting to a win over Cazenovia College on Friday afternoon in straight sets by scores of 25–13, 25–14 and 29–27. Later that night, the Bombers took on Union College in a wire-to-wire match that went to five sets, with the Dutchwomen winning the final set 15–6.

Heading into the second day of play, the Bombers defeated Baptist Bible College & Seminary in their second sweep of the weekend by scores of  25–9, 25–12 and 25–17. The South Hill squad concluded its weekend by falling to SUNY Oneonta in five sets, pushing its overall record to 5–2 on the season.

Freshman outside hitter Joelle Goldstein led the team with 53 kills throughout the four games, including a combined 28 on the final day of play. She also posted a sizeable .600+ kill percentage for two of her total four games.

“Joelle really stepped up this weekend,” Sorensen said. “I am excited to see her continue to grow as a player.”

In their next set of games, the Blue and Gold will travel to Mahwah, New Jersey, to compete in the Ramapo Roadrunner Invitational from Sept. 12–13.

In its first home game of the season, the field hockey team earned a 4–0 win over SUNY Oswego on Sept. 3 at Higgins Stadium before falling short against the University of Rochester in a 4–2 loss Sept. 7 in Rochester, New York.

Underclassmen were the biggest danger against Oswego, as sophomores netted all four goals. Forward Lauren Delia recorded two tallies and one assist on the day with her first goal coming in the opening eight minutes of the game.

Senior captain Sarah Pfeifle said the sophomore class is an integral part of the Blue and Gold, and will continue to develop during the season.

Against the Yellowjackets, goals from sophomore midfielder Colleen Keegan-Twombly and senior forward Danielle Coiro weren’t enough to stop the Rochester offense that jumped out to a 3–0 lead in the opening 45 minutes.

In its next game, the Bombers will host SUNY Oneonta on Sept. 17 at Higgins Stadium.

In its first tournament of the season, the golf team finished in second place at the St. Lawrence Invitational on Sept. 7 in Canton, New York, after shooting a team score of 647.

Senior Kelsey Baker opened the year with an outstanding performance, scoring a 77 and 76 in the tournament, which led the Bombers over the weekend. Her total score of 153 allowed her to tie with New York University freshman Alyssa Poentis for the best score of all participating players.

Though the team placed in second, Baker said the team can perform better in upcoming events.

“Our team did not play as well as we know we can, but hopefully there will be less nerves going into the Empire 8,” she said.

Additionally, senior Sharon Li shot a 78 on both days of the tournament, which also contributed to the top–5 finish. The Blue and Gold had three more players shoot in the 80s on both days.

The South Hill squad will next compete from Sept. 13–14 in the Empire 8 Championship at the Mark Twain Golf Course in Elmira, New York.

With 9–0 victories in its previous two matchups, the women’s tennis team traveled to Williams Smith College to compete in the Mary Hosking Invitational from Sept. 6–7. In their first tournament style event, the Bombers struggled to find the rhythm they had in the previous two competitions.

In singles play, the Blue and Gold finished with six wins and 10 losses, with seniors Alyssa Steinweis and Kelly Fishback, and sophomore Sydney Greenspan among those who earned victories on the team.

In the doubles competition, the Bombers won an additional three games. Steinweis and senior Allison Vizgaitis dominated their matchup, winning 8–0.

Hoping to regain its winning form from the first two games, the South Hill squad will travel to Rochester, New York, on Sept. 13 to face Nazareth College.

The men’s and women’s cross-country teams had their first official race of the season Sept. 6 at the Oswego Invitational in Oswego, New York.

Rochester Institute of Technology senior Matt Giannino was victorious in the 7.75k event for the men’s race, clocking in at 24:51.3.  Meanwhile for the Bombers, junior Larkin Bohanan placed 28th, with a time of 26:45.5.

In the women’s event, RIT sophomore Emma Jones finished first in the 5k event, with a time of 18:24.5.  Bombers senior Emily Smith recorded the best score on the team, finishing sixth with a time of 19:10.0.

Connor said teammates used one another to perform to their best ability.

“A lot of us were able to run together for the majority of the race, which helped us to run fast,” he said.

Next week, the Bombers will travel on Sept. 13 to compete in the Saratoga Invitational in Saratoga Springs, New York.