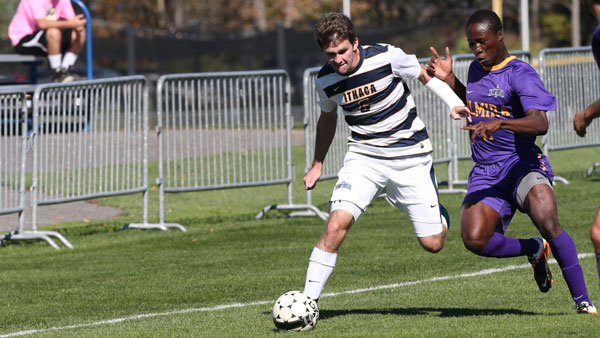 The football team increased its overall record to 5–1 and Empire 8 conference record to 3–1 with its win against the Utica College Pioneers on Oct. 19.

The  Pioneers put up a good fight against the Blue and Gold at Charles A. Gaetano Stadium in Utica, N.Y. In this back and forth contest, Bomber junior wide receiver Joel Lynch caught a 27-yard touchdown pass from junior quarteback Tom Dempsey in the first quarter. Utica returned with a fumble recovery for a touchdown just minutes later.

The Bombers trailed 21–20 In the fourth quarter, but Dempsey’s pass to senior tight end Jared Prugar put the Bombers ahead for a 26–21 win with 3:10 remaining in play.

The Bombers take on the St. John Fisher College Cardinals at Butterfield Stadium on Saturday.

The tennis team won its ninth consecutive Empire 8 title Oct. 20 with a 5–0 victory against Nazareth College. The win earned the Bombers an automatic bid to the NCAA Division III Women’s Tennis Championship this upcoming May. Graduate student and team captain Allison Young was selected as the tournament’s most outstanding player.

The South Hill squad opened the Empire 8 Championship competition Oct. 19 with a 5–1 win against Stevens Institute of Technology. The Bombers won three doubles matches and two singles matches, while Stevens earned its only point of the match from an injury default.

It was the team’s eighth shutout of the season, which concluded fall competition with a perfect 10–0 record for the first time since 2007.

With only three games remaining in its season, the field hockey team has struggled in the last two games.

The Blue and Gold hosted the No. 6 ranked William Smith College Herons on Oct. 15 but lost by a score of 4–1. The Bombers surrendered two goals each half, putting them at a four-goal deficit with 15 minutes remaining. Bombers sophomore forward Taylor O’Neil scored a goal less than a minute later, but it was the South Hill squad’s only goal of the contest.

The squad travelled to Washington, Pa., on Oct. 19 to take on Empire 8 foe Washington and Jefferson College. The Presidents took a 2–0 lead with two goals early in the half. Senior Lindsay Flanagan netted a goal for the Bombers five minutes into the second half, but the squad didn’t score again and the Bombers lost 2–1.

The South Hill squad will face off with the St. John Fisher Cardinals at 5 p.m. Saturday at Higgins Stadium.

The women’s cross country team ran at the Oberlin Inter-Regional Rumble in Oberlin, Ohio on Oct. 19. Six of the team’s top seven runners clocked season-best performances to lead them to a ninth-place finish out of 34 teams.

Junior Alexa Rick led the way on the 6-kilometer course, clocking a season-best time of 22:39 and finishing 36th overall. Graduate student Jen Randall was the next Bomber behind Rick in 54th place with a time of 23:01.

Sophomore Jaime Lisack and junior Hannah Wright finished within a second of each other in 65th and 67th place, respectfully, with times of 23:14 and 23:15.

Juniors Emily Smith and Meghan Cass were also were within a second of each other, as they rounded out the top six finishers with a back-to-back finish in 77th and 78th place respectively. Smith clocked in at 23:25 while Cass finished in 23:26.

The squad will compete Saturday at the NYSCTC Championships at Hamilton College in Clinton, N.Y.

The women’s soccer team (13–1–0, 5–0–0) recorded three 1–0 victories in the last week, beating Houghton College, Nazareth College and SUNY-Oneonta. The victory over Nazareth was especially important, as it gave the Bombers sole possession of first place in the Empire 8 conference.

Sophomore goalkeeper Beth Coppolecchia recorded her fifth, sixth and seventh solo shutouts, playing every minute in each of the three games en route to her third Empire 8 Defensive Player of the Week honor this season.

The Blue and Gold have two more regular season games before postseason. The team plays at home on Carp Wood Field against Stevens Institute of Technology on Saturday.

After finishing as runner-up in its home tournament, the volleyball team had a quiet week, playing just one match. The Bombers looked to stay hot, as they played their sole game Oct. 22, traveling to SUNY-Oneonta to take on the Red Dragons.

The Blue and Gold kept it close in the first set, losing 25–20, but the Red Dragons proved to be too strong, winning the final two sets, 25–10 and 25–13. Freshman outside hitter Shaelynn Schmidt led the team six kills, and freshman setter Molly Brown added 10 assists. Oneonta senior Erica Darpino had a strong match, recording 10 kills.

The Bombers will look to bounce back and improve their 2–2 conference record as they travel on Friday to Rochester, N.Y. The squad will play three matches against Empire 8 competition, before hosting Wells College on Tuesday in Ben Light Gymnasium.

The men’s soccer team played against Utica College on Oct. 19, entered the with a 2–8 record. The Bombers came out striking in the first half, scoring two goals within the first eight minutes of the game. The Bombers opened the scoring in the third minute when freshman forward Sean Forward netted his fifth goal of the season. In the eighth minute, sophomore midfielder Blair Carney found the back of the net for the first time this season. The Pioneers answered with a goal 10 minutes into the second half, but Forward added two more goals for a hat trick. The Bombers would go on to win 4–1, and junior goalkeeper Jordan Gentile made six saves.

The Bombers traveled to Alfred University on Oct. 22 to face the Saxons. The game was tied until Alfred scored the game’s only goal in the 82nd minute. Despite losing the game, the Bombers outshot Alfred 19–11. Gentile played all 90 minutes in net, saving two of the three shots on goal. The loss drops the squad to a 3–9 (2–2) record this season.

The South Hill squad returns to action when it travels to Nazareth College to face the Golden Flyers at 1 p.m. Oct. 26.