Taking a lap through the Ithaca College Cross Country Course 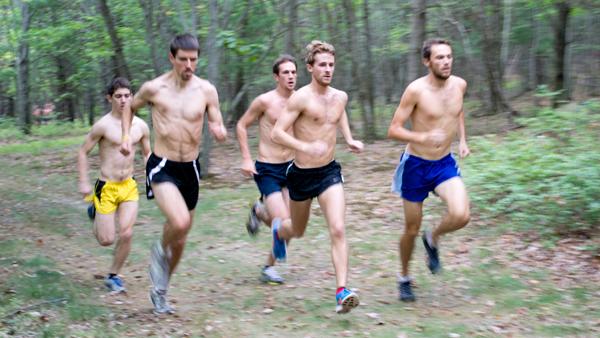 The dirt, rocks and grass that cover the Ithaca College Cross Country course are pounded by sneakers on a weekly basis from both the men’s and women’s team practices. On race day, however, the course lays still because of its high elevation.

The 5-kilometer route on the northeast portion of campus comprises a complex combination of trails, with hills rising beyond the heights of many other cross country courses on the Bombers’ schedule. As a result, the team uses the course for training purposes or light jogs on Fridays to ensure that they can handle other race routes around the league.

By using this course, the team builds more strength for the flatter courses in its division, allowing the team to move at a faster pace. Senior David Geary, captain of the men’s cross country team, said this is an important factor to their training because modern cross country now focuses on times more than difficulty, making the course less suitable for today’s racing culture.

“It is a relatively hilly course, and most college courses now are becoming flatter and faster because it is harder to compare teams across the country without using times,” Geary said. “So, it is now becoming more and more important to try and run fast times during the year rather than running on difficult courses, which cuts out our course altogether.”

Step one of this trek begins on the athletic fields past the Terrace 13 dorm building. This section of the race course stands as the flattest area of the course and equates closest with the other courses around the division. This portion of the course extends for under a mile of its total distance.

Graduate student Tyler Murray said the team tries to break out at a powerful but not strenuous pace in this section to guarantee that they are prepared for the obstacles ahead.

“The first half mile or so is perfectly flat before you get to the hills,” Murray said. “We know that the hills are coming up, and we try to make a move on the hill because for a lot of guys, that’s where they slow down.”

From the fields, the South Hill squad continues onto a small portion of pavement — the only pavement it encounters on the course. The route returns toward the fields for what seems to be just a moment, and then the runners embark on step two: the climb.

Located behind the Terrace dorms, the climb is broken into three segments: the first hill, followed by about 600 meters of semi-flat trail, and finally a steeper, longer-distance hill. While there may be a slight break, Senior Carly Graham, co-captain of the women’s cross country team, said the climb still puts a great deal of stress on the body, even if it is just a Friday afternoon pre-meet jog.

Graham said the Bombers deal with both mental and physical struggles throughout this section of the course, but it is a key portion of their team strategy.

“Trying to work together the whole race is our goal, so using each other to get up the hills is key, and using them to pass is also good,” Graham said. “It’s the most mentally tough part, but the most rewarding because when you are in race mode, it goes by fast.”

Following the hills, the athletes hit step three of the course: the downhill section. This area of the course has a bit of gravel, Graham said, making it difficult for some athletes to get a good kick for the end of the race. However, Murray said this is the prime time to catch up on the distance lost during the race and advance toward the front of the pack as much as possible.

“Towards the end, a lot of people get stuff back because the last quarter of a mile is a pretty good downhill, so everyone can really move at that point,” Murray said. “So, you try and make a move on the hill, then move past everyone else to try and catch everyone before the finish.”

Competitors cross the course’s finish line only once a year because of the course’s steep composition. Geary said even though this is one of the most difficult courses in the league, the Bombers wish they ran this route more for races.

“We tend to gravitate towards our home course just because of the familiarity with when to push and where the difficult parts are,” Geary said. “There are also a lot of other great courses throughout the region, but we really love this course.”