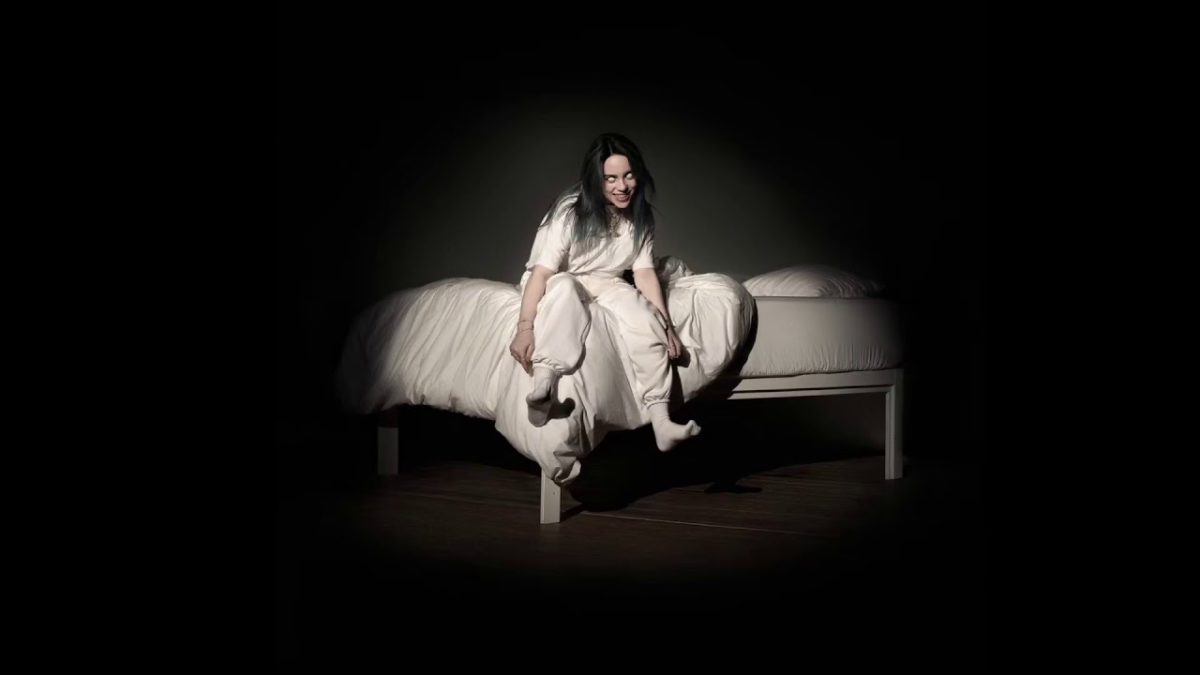 Darkroom
"WHEN WE ALL FALL ASLEEP, WHERE DO WE GO?" is a powerful record full of dynamic instrumentals, vocals and themes. Billie Eilish stakes her claim in the music industry with this album, placing herself as a talented and capable young artist.
By Dariene Seifert — Staff Writer
Published: April 7, 2019

WHEN WE ALL FALL ASLEEP, WHERE DO WE GO?

Two years after Billie Eilish catapulted onto the indie-alternative scene with her EP “dont smile at me,” the 17-year-old artist released her magnum opus of a debut album: “WHEN WE ALL FALL ASLEEP, WHERE DO WE GO?” Eilish explores the positives and negatives of adolescence, love and pain, all with a mix of somber vocals and sharp, electrical beats.

The intro, titled “!!!!!!!,” sets the tone for the rest of the album. It begins oddly by playing slurping sounds, with Eilish exclaiming, “I have taken out my Invisalign and this is the album,” followed by a fit of hysterical laughter. Eilish’s excitement over her debut is funny and, albeit short, shows the realness of the artist.

“bad guy” plays after, blending heavy bass, playful beats and catchy snapping fingers in the background. Eilish’s vocals are fully expressed — they bounce perfectly on higher notes and are soothing on lower ones. The track goes into detail about Eilish taunting her lover, while brandishing her tough nature — “So you’re a tough guy/ Like it really rough guy/ Just can’t get enough guy.” At the end of the chorus, she admits, “I’m the bad guy/ Duh.” The “duh” is comically sassy and to the point.

Though the next track, “xanny,” is calming thanks to Eilish’s vocals and tackles the subject of recreational drug use, it is tediously slow. While the listener attempts to be intrigued by Eilish’s story of being the only one at the party who is sober, they might end up falling asleep before the song is over. Eilish adds a layer of warped, technical noise to her vocals throughout, which becomes grating to the ears. However, at the end of the track, Eilish introduces a few lines of a cappella, an addition that redeems the unnecessary autotune. The song visualizes how lonely Eilish is at this party. There is a sense of the artist wanting to be “cool” in the presence of other people who are under the influence, but her plan backfires. Unfortunately, the listener cannot be fully immersed in the song and visualizations due to the awkward autotune.

“you should see me in a crown” is epic and slick. At the beginning, the sound of a sword being sharpened echoes ominously. This sets a dark but staggering mood. Right when Eilish sings, “You should see me in a crown/ I’m gonna run this nothing town,” the instrumentals blare creatively chaotic, and the artist sets her reign in motion — “Watch me make ‘em bow/ One by one by one.” The power of the dynamics punches with amazing musical force. While in “bad guy,” Eilish is jokingly poking fun at her partner, she announces her dominance here and refuses anybody who does not respect her rule.

Eilish expresses the pain she felt from rejection in her ballad, “wish you were gay.” In the song, Eilish cleverly uses numbers to convey her frustration, with lines like, “Ten fingers tearing out my hair/ Nine times you never made it there/ I ate [eight] alone at seven/ you were six minutes away.” A simple but pleasing sounding acoustic guitar plays in the background, with a sitcom audience reacting to certain lyrics — “‘I’ll never let you go,’/ five words you’ll never say (Aww).” These aspects come together to paint a narrative of the way an adolescent’s mind can sometimes be selfish and irrational.

In “bury a friend,” Eilish sings from the perspective of a monster that is under her bed. The monster questions why the artist isn’t afraid of it only to realize that Eilish is the monster herself. Going along with the dark atmosphere of “you should see me in a crown,” the track dials the creepiness level up to 10. Unlike the irksome distorted vocals on “xanny,” the manipulation of the vocals here is used perfectly, adding to the horror factor. The instrumentals also match up with the song’s setting with heavy, electronic beats.

Billie Eilish’s debut album, “WHEN WE ALL FALL ASLEEP, WHERE DO WE GO?”, is completely distinctive from the usual mainstream pop. The album’s exploration of various subjects and instrumentals from a teenager’s viewpoint makes it fascinating. With this powerful album, Eilish proves that her music and her potential are forces to be reckoned with.