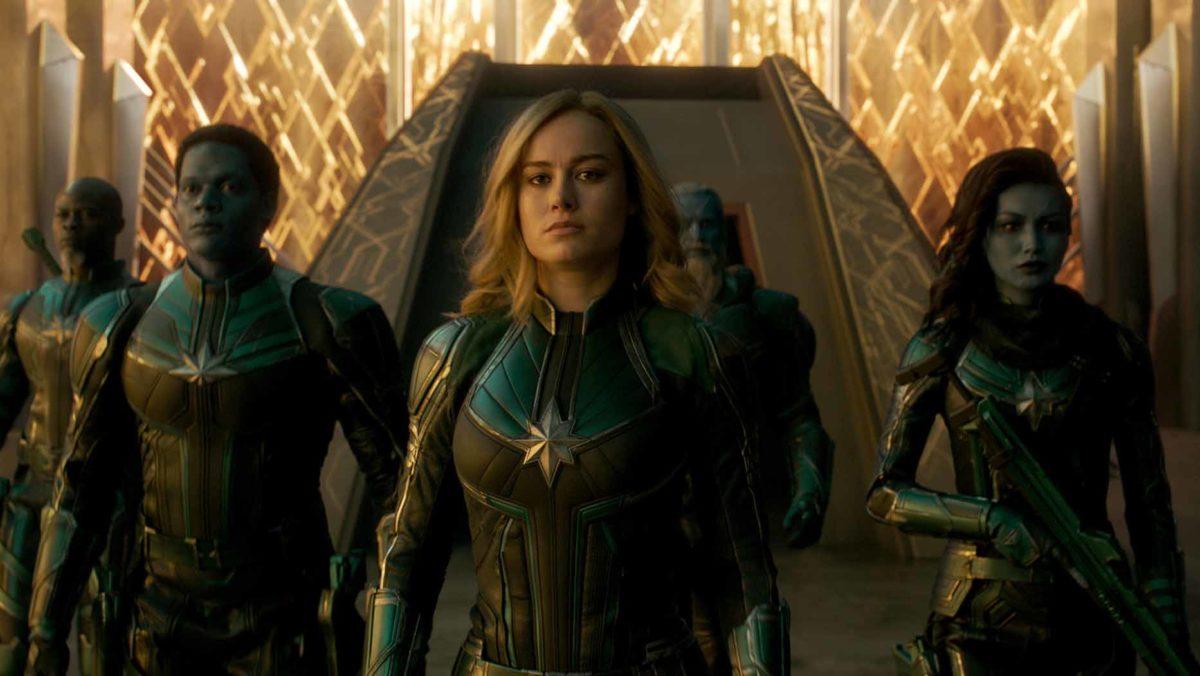 Marvel Studios
"Captain Marvel" is entertaining and introduces interesting characters and engaging storylines, but strays from the prestige of other Marvel films. In comparison to other Marvel films, the CGI and acting falls short.
By Liam Conway
Published: March 24, 2019

The strongest character in the Marvel Cinematic Universe (MCU) has finally been introduced in the 21st film of the franchise, and her first outing has left a lasting impact.

“Captain Marvel” follows Carol Danvers (Brie Larson), an ex-Air Force pilot who eventually became a member of a group of alien warriors known as the Kree Starforce. Carol and the other Kree Starforce members are caught in the middle of an intergalactic war against a shape-shifting alien race known as the Skrulls, lead by Talos (Ben Mendelsohn). When Carol is stranded on Earth with Nick Fury (Samuel L. Jackson), the two go on the run from the Skrulls who are hunting them, and that’s when the film really kicks into gear. This film has a lot riding on it because Captain Marvel is the first female hero to be the lead of a film in the MCU.

This film lands exactly where it needs to within the greater MCU, introducing Captain Marvel in a fun and interesting way. At the beginning of the film, Carol is combat training with her commander, Yon-Rogg (Jude Law), before going on a mission to fight the Skrulls with the other Kree Starforce members. Unfortunately, this sequence is dull and follows characters that contribute almost nothing to the greater storyline. Larson and Law are supposed to have a playful pupil and mentor relationship, but instead, it feels more like two faceless characters attempting to one-up each other at all costs.

The film’s writing improves when Carol lands on Earth and begins interacting with Nick Fury, explaining that she is part of an alien race fighting an intergalactic war. The banter between a confident Carol and a skeptical Nick succeeds at being witty and clever, directly contrasting her relationship with Yon-Rogg. It’s exciting to watch Nick talk his way out of situations using his skills as an agent of the government organization S.H.I.E.L.D., Strategic Homeland Intervention, Enforcement and Logistics Division, while Carol uses her remarkable strength to fight her way out of a pickle.

That being said, Larson’s acting isn’t always the most captivating, despite having some engaging dialogue peppered throughout. Larson doesn’t always sell scenes as well as her scene partners, like Carol’s old friend Maria Rambeau (Lashana Lynch), who pours her heart out at one point. Even though Larson’s acting isn’t consistent scene to scene, she still manages to sell the ideals of Captain Marvel. Larson’s determined attitude and tremendous physicality make Captain Marvel come to life.

Although Marvel Studios usually has difficulties making villains into fully realized opponents for the hero, the team behind “Captain Marvel” has made a clear effort to make Talos into a threatening foe. Mendelsohn has a made a name for himself as a villain in tentpole films like this, appearing in “Rogue One: A Star Wars Story” as Krennic and “Ready Player One” as Sorrento. Talos is in the running for his best antagonistic role yet, as he constantly outsmarts both Nick and Carol. Not only does Talos outsmart Nick and Carol, but he also reveals information to them that they may not already know, keeping them and the audience constantly guessing.

Marvel Studios has mastered the art of CGI over its 11 years of filmmaking, but “Captain Marvel” doesn’t achieve the same distinct visual style as other films in the franchise. Taika Waititi’s “Thor: Ragnarok,” James Gunn’s “Guardians of the Galaxy” and the Russo brothers’ “Captain America: The Winter Soldier” each have their director’s fingerprints all over it. “Captain Marvel” lacks that visual flair and winds up looking like a generic superhero/sci-fi film, often even looking cartoonish. The only aspect of the film that breaks new ground is how much younger they make Jackson look. “Captain Marvel” takes place in 1995, so Jackson is meant to look 25 years younger than he does today. There is never a moment where he looks like he has been technologically altered; it’s amazing that it’s not distracting.

Overall, “Captain Marvel” is a serviceable Marvel movie that introduces an exciting new character into the MCU. Performances from Larson, Jackson and Mendelsohn add to the film’s intrigue and fun. Even though the film has fun moments, it still lacks any defining characteristics to make it go down in history as one of the best Marvel films. It resembles other entry-level solo superhero outings, joining the likes of “Doctor Strange” and “Ant-Man.” While “Captain Marvel” isn’t the best film in the franchise, Carol never feels like a character that is too strong to be challenged, and each story beat is earned and well thought out. “Captain Marvel” promises an exciting future for the character and entices fans to see what else she can offer when The Avengers come calling for help.