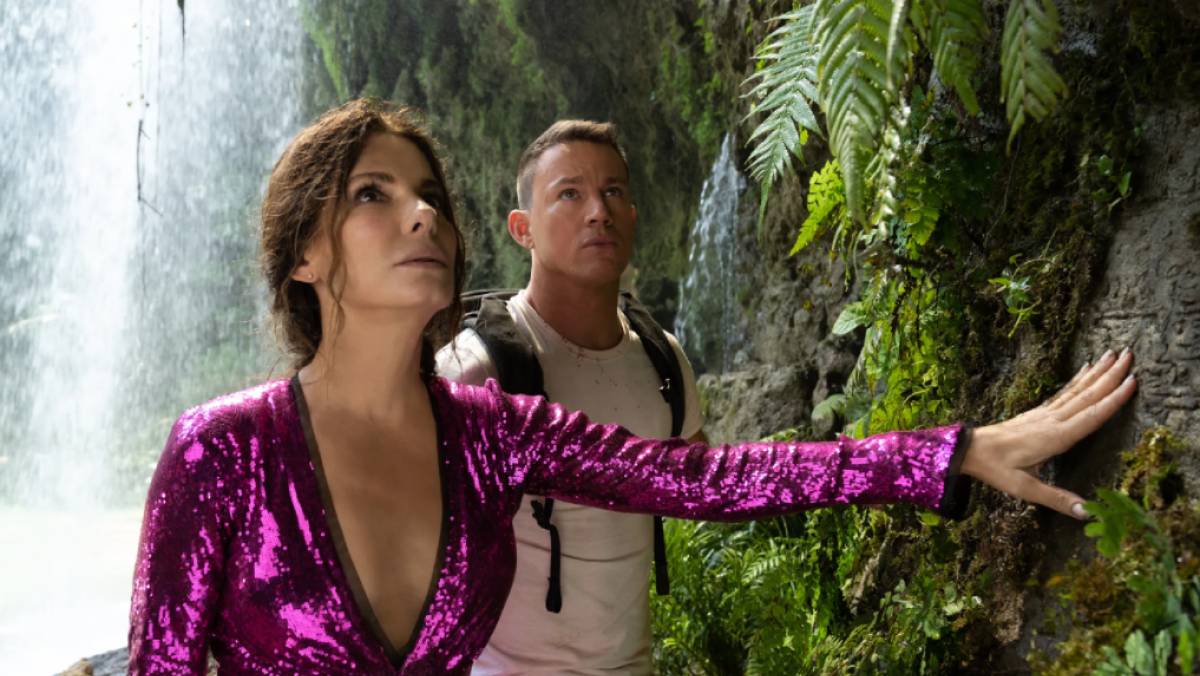 Courtesy of Paramount
Despite a few minor plot-based inconsistencies, "The Lost City" delivers a fun and engaging film thanks to its stars.
By Evan Miller — Staff Writer
Published: April 7, 2022

After years of being relegated to streaming services, the big-budget, theatrically-released romantic comedy is back with Aaron and Adam Nee’s “The Lost City,” a film that pays homage to action and adventure romance films of the past through its familiar plot and characters. Although it isn’t as memorable as some of the classics like “Romancing the Stone” that inspired it, “The Lost City” is a fun ride with two impeccably-matched leads.

In “The Lost City,” archaeologist turned world-famous romance novelist Loretta Sage (Sandra Bullock) is kidnapped by an obsessed billionaire (Daniel Radcliffe) who believes that Sage can help him track down a real-life ancient treasure that she wrote about in her latest book. Her only rescue comes in the form of Alan (Channing Tatum), a cover model who isn’t nearly as heroic as the fictional character he famously poses as on the covers of Sage’s novels.

The element that “The Lost City” utilizes to perfection is the comedic chemistry between Bullock and Tatum. Bullock brings the same strong comedic energy that she’s brought to films like “The Heat” and “The Proposal.” Tatum plays to his strengths as a comedic actor in a role that is very similar to his dumb yet loveable character in the “Jump Street” films. Together, the two stars are unstoppable. Their chemistry is a bright spot in “The Lost City” and makes for several hysterical moments throughout the film.

“The Lost City” is also bolstered by a decent supporting cast, which includes a particularly fantastic extended cameo from Brad Pitt. For the short amount of time that he’s in the film, Pitt creates a brilliant dynamic with Tatum and Bullock’s characters that will most certainly leave audiences wanting more. While his abrupt appearance and exit are hilarious and highlights of the film, his presence is missed as the film continues on and begins to focus on some of the other, less interesting supporting characters.

Radcliffe gives an energetic performance as Abigail Fairfax and certainly tries to make the most of his role. Unfortunately, he is unable to overcome the fact that Fairfax is simply an uninteresting character with extremely lackluster motivations. He has no real attachment to the treasure that he seeks and is simply some rich jerk who is desperate for his father’s approval. Audiences have seen characters with this type of motivation many times and it is just as cliché and unoriginal here as it is in films like “Thor” or the recent “Uncharted” film.

Whenever the film focuses on Fairfax or on Sage’s publicist Beth (Da’Vine Joy Randolph), it almost completely grinds to a halt and loses the momentum that it’s been able to maintain whenever its two main leads are on screen. Beth is a likable character, but the situations that she finds herself in throughout the film feel out of place and are infinitely less interesting than everything else that is happening with Sage and Alan. The film too often pauses to focus on what she’s doing to help Sage. What was done in several scenes with her character could have been done in one or two and the film would’ve been absolutely no different.

“The Lost City” is a fun ride that depends on the chemistry between its two stars. Luckily, they deliver well in so many delightful moments that it almost makes up for the rest of the film. The adventure the characters find themselves on isn’t as exciting as it could have been, however, the journey that they go on as their relationship develops is not only believable but endearing with its message of not being afraid to live out a great adventure.