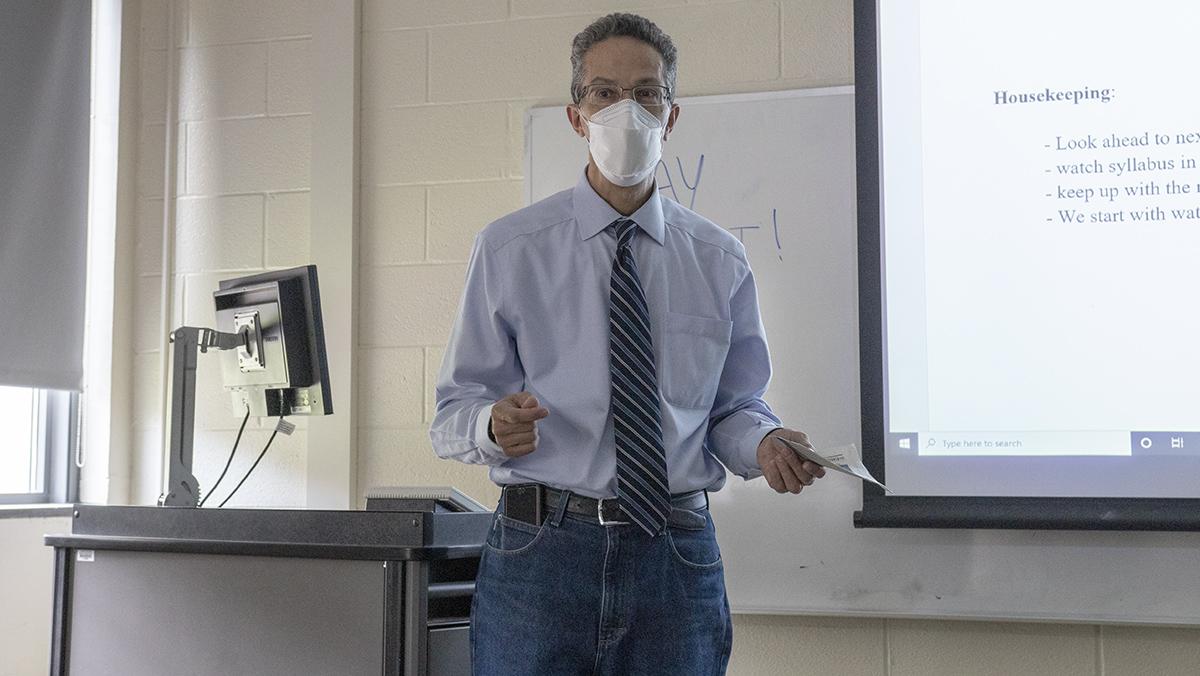 Mikayla Elwell/The Ithacan
Juan Arroyo, assistant professor in the Department of Politics, said he is now facing an intense school year because of the APP. Arroyo said that when enrollment rates dropped last year, two sections were taken from his schedule, but now he “owes” the college six credits.
By Jeneva Long — Contributing Writer
Published: September 15, 2021

The Academic Program Prioritization (APP) process has led to a decrease of contingent faculty members at Ithaca College, leaving some remaining faculty members with heavier workloads this semester.

The APP involves cutting 116 full-time equivalent (FTE) faculty positions and 26 majors, departments and programs. The APP process has resulted in contingent faculty members — faculty members who are not on a tenure track but are eligible for benefits — losing their jobs because the process was conducted in line with Section 4.9.8 of the Ithaca College Policy Manual. The policy states that terminations resulting from the discontinuation of a program will be done in the order of part-time, per-course faculty, adjunct faculty, faculty employed by term appointments, non-tenure-eligible-notice (NTEN) faculty, tenure-eligible faculty and tenured faculty.

Contingent faculty members whose contracts were not renewed for the upcoming academic year have left the college, meaning that there are some classes in need of faculty to teach them.

Matt Vosler, assistant professor in the Department of Recreation and Leisure Studies, said he has experienced an increase in the amount of work he has this semester because of fewer faculty members, despite the reduction in courses offered. However, he said the bulk of his workload increase this semester is coming from other administrative duties he has had to pick up. Vosler is one of the professors who will be cut from the college because of the APP, along with the Department of Recreation and Leisure Studies.

“I think our mental health is suffering across the board,” Vosler said. “A lot of our faculty seem deflated after the APP which is sad. … At the end of the day, a big part of my job is being able to be innovative and student-focused in my teaching and service, and because we get stretched thin it’s hard to be as focused as one would want to be for teaching. And I still give lots of my teaching. It just ends up being a lot of really late nights and early mornings.”

Beachler said Moon’s contract was supposed to last until the end of the 2021–22 academic year, but Moon was offered and accepted a position at the University of Rochester at the end of Spring 2021.

Beachler said because Moon left after Spring 2021, the department was going to remove Constitutional Law, a class that introduces the United States civil rights and law-making process. Beachler said he considers this class crucial, especially to those studying legal studies, so he decided to teach the class this year.

“So I’ve taken on a whole new area of study that I hadn’t done for many, many years. … It hasn’t necessarily harmed me or anything, I mean it’s been kind of interesting to learn that stuff, but it’s a lot more work”, Beachler said.

Juan Arroyo, assistant professor in the Department of Politics, said he is now facing an intense school year because of the APP. Arroyo said that when enrollment rates dropped last year, two sections were taken from his schedule, but now he “owes” the college six credits. According to the Faculty Handbook, faculty can not be assigned more than 24 credit hours per academic year.

Arroyo said he was able to make up one of those sections over the summer, but said he is suffering time constraints under the intensity of full classes and extended office hours.

Arroyo said there are many students who want to take classes and having to teach extra classes is difficult and adds stress.

“Our tools are our colleagues … not everyone who is left has the same specialty, or the same history or the same experience,” Arroyo said.

Arroyo also said there are some classes that will be cut and students will not be able to take them again. He said he is worried that many classes will disappear from the college forever. Arroyo said many of the classes no longer being taught are core classes that students have enjoyed for years. Some students have concerns about the lack of classes impacting the requirements they need to graduate.

“It’s going to affect the ways in which Ithaca College is unique … just water down that uniqueness,” Arroyo said.