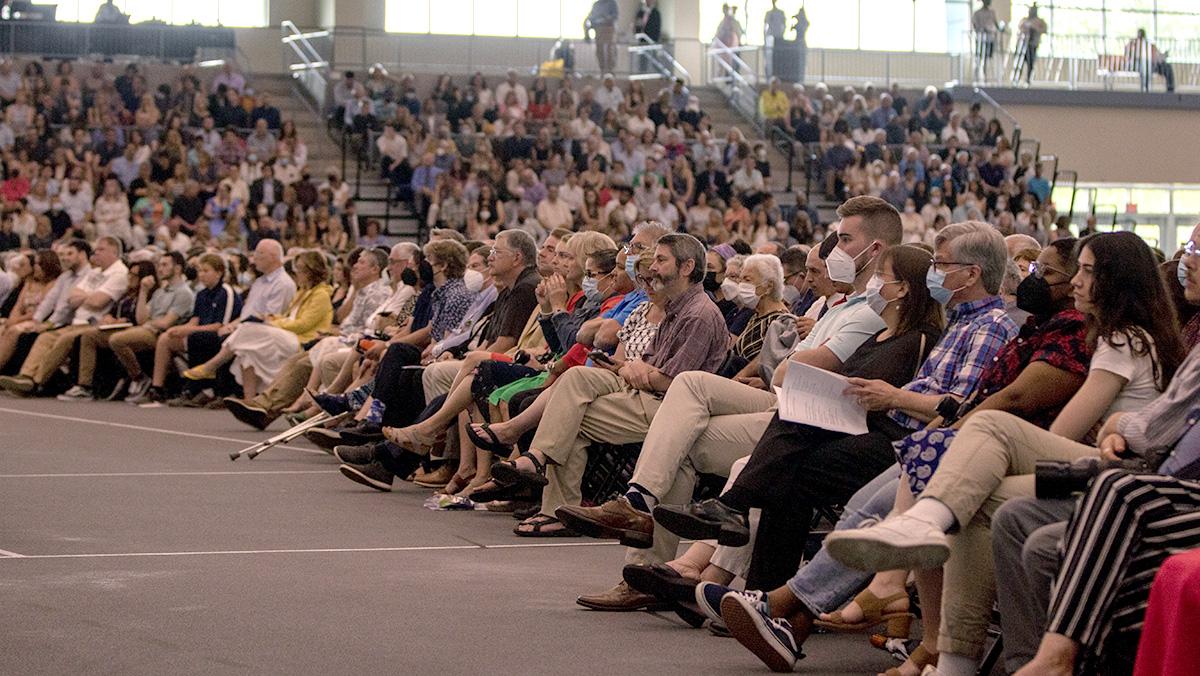 In an email to the campus community Oct. 27, Melanie Stein, provost and senior vice president for Academic Affairs, said the graduate hooding and commencement ceremony will occur at 1 p.m. May 20, 2023. The undergraduate commencement ceremony will occur at 10 a.m. May 21, 2023. Both ceremonies will be held in person at the Glazer Arena in the Athletics and Events (A&E) Center.

“Though we are still months away from these moments, I want to offer my gratitude to this community for supporting these students as they finish their time with us on South Hill and offer my thanks particularly to the many staff and faculty whose work and creativity will make May’s celebrations safe, student-centered and joyous,” Stein said via email.

Further details about both ceremonies were provided in respective Intercom posts also written by Stein.

Stein said in the post about the graduate ceremony, 2023 will be the first year that the graduate hooding will be held as a single ceremony that also includes commencement. Stein said students will be formally hooded by faculty from their department and will receive degrees at the event, which will also be livestreamed. Stein also said graduate students can have an unlimited number of guests attend the ceremony and tickets will not be required because of the small number of students graduating.

“We are making this change so that our graduate students and their supporters can participate in a single, focused event that marks the completion of this significant accomplishment,” Stein said in the post.

Reed Pollard ’22, administrative assistant to the president, said via email that the new graduate ceremony will make it easier for students to attend. Previously, students who wanted to attend both graduate hooding and commencement had to spend two days at the college during commencement weekend.

“The main reason why we shifted to one ‘graduate hooding and commencement’ is to really support the student experience,” Pollard said via email. “With only having one ceremony, graduate students and families only need to attend the Saturday program.”

Prior to the COVID-19 pandemic, commencement was held outside as recently as 2019. The Ithacan reported that Pollard previously said Commencement was held inside in 2022 because it is logistically easier for the college to use its own facilities and resources, as opposed to an outside ceremony when contractors would have to be hired to provide certain resources. Pollard also said the Glazer Arena is easier to secure than Butterfield Stadium.

For the Spring 2023 commencement, graduates will receive four tickets for guests to attend the ceremony and others will be able to watch the ceremony via livestream. There will also be opportunities to view the livestream at other locations on campus.

Senior Chloe Landau said she was not partial to having one or separate ceremonies.

“I think having us all together is cool because having a big ceremony like that is kind of, like, I don’t know, more traditional and stuff, but either way, I think it’s fine,” Landau said. “I think maybe that experience of graduating is more enhanced by having a whole thing altogether, but also, like, logistically, I know that it’s harder and weighs on the janitorial staff a lot and I don’t know, so I guess whatever’s easier.”

Landau said that regardless of how commencement is organized, she feels that the ceremony will be less meaningful for her because so many of her teachers and mentors have left the college as a result of the Academic Program Prioritization Process.

​​”There’s definitely people that I have so much gratitude for that I wanted to be able to see and express my gratitude toward once I graduated and everything and they’re not there,” Landau said.

Landau also said that because so much of her college experience has been impacted by the COVID-19 pandemic, she feels conflicted about how ready she is to graduate.

“It’s so weird because I feel like so much of my college experience has been just online and COVID,” Landau said. “I don’t know, it’s very weird. … I do feel ready and I kind of want to get out of here, but I don’t know it’s definitely much much different than I expected.”

Senior Caitlin Glastonbury said she was looking forward to participating in commencement and was happy it would be in person.

“I’m excited for what it looks like this year,” Glastonbury said. “I don’t know how much it really affects me personally, how the exact ceremony is run. But I hope it’s a good experience for everyone.”

Stein said in both posts that students who want to participate in either ceremony will need to register and will be able to do so sometime in early March. Stein also said future updates will be posted to the college’s commencement website.

“Class of 2023, it is our intention to offer you a meaningful, joyful moment that is reflective of all the magic that is Ithaca College,” Stein said in both posts. “I cannot wait to celebrate with you and your loved ones in May.”