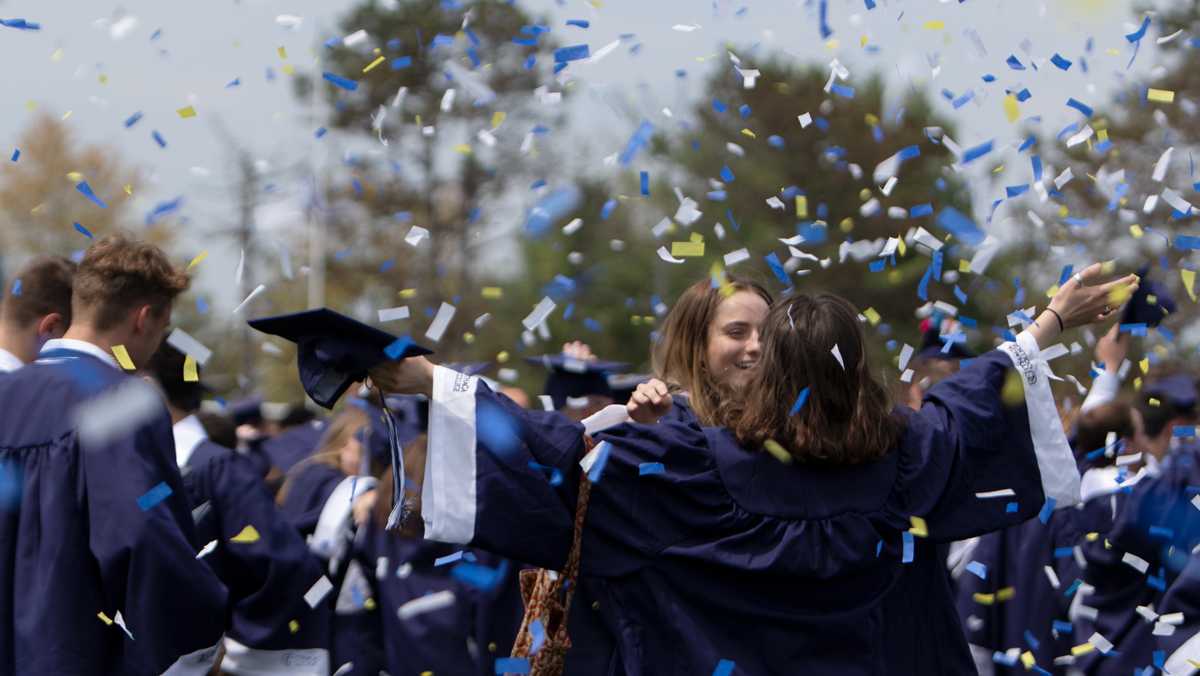 Jackie Marusiak/The Ithacan
Members of the Class of 2019 throw their caps as President Shirley Collado officially presents them as alumni. Senior Ezeka Allen, Class of 2019 president, spoke at the ceremony and observed a moment of silence for former IC student Anthony Nazaire.
By Ashley Stalnecker — Staff Writer
Published: May 19, 2019

Ithaca College’s Class of 2019 was encouraged to go boldly into a future supporting equity and inclusiveness at the college’s 124th Commencement ceremony May 19.

The ceremony honored the 1,510 students in the Class of 2019. This was the second ceremony to recognize graduating students by having its graduates’ names read as they walked across the stage, resulting in a ceremony that lasted approximately three hours. At the ceremony, President Shirley M. Collado congratulated the students in the graduating class on their diverse identities and achievements. She pointed out the stoles and cords students wore to represent different backgrounds — such as the black and gold cord for first-generation students, the rainbow stoles for members of the LGBTQ+ community and the purple stoles for the inaugural cohort of BOLD scholars.

“What you represent is the very best of IC,” Collado said. “You have tremendous fire, inspiring ideas and sharp intellect, and you engage with one another and this community authentically by being rooted deep in your identities.”

At the ceremony, Collado gave out the inaugural Presidential Medal to Nancy Pringle, executive vice president and senior advisor to the president. Pringle is retiring after 25 years at the college. Collado also awarded honorary degrees to Melissa Victoria Harris-Perry, educator and journalist; Ithaca Mayor Svante Myrick; and Mildred García, president of the American Association of State Colleges and Universities in Washington, D.C.

García also delivered the 2019 commencement address. She acknowledged the college’s commitment to creating an inclusive environment in a democratic, multicultural nation.

“I am proud that each of you now joins me and President Collado in being the change we want to see in the world,” García said. “So that the next generation of diverse students encounter less obstacles and more opportunities, less discrimination and more equal pay, less broken hopes and more broken glass ceilings.”

García spoke of her background and experiences in higher education. She said both of her parents moved migrated from Puerto Rico to Brooklyn, New York. She said they did not receive more than an eighth–grade level of education because of a lack of equitable access to quality education.

“The only inheritance a poor family leaves its children is a good education,” Garcia said. “Together, my parents wielded the power of that profound statement to light a fire under all seven of their children. My parents understood that education, and only education, could propel us beyond the industry walls, beyond the housing projects we moved into and beyond what we could even imagine.”

García urged the graduates to become the country’s role models and to wield the responsibility of earning a college degree.

“We as educators and you too, graduates, are obligated to speak out,” García said. “Not just on moral grounds but also on the very tenets we agree to uphold by accepting our degrees and embarking on your career and life journey.”

Senior Jimmy Gramajo, the first of his family born in America and a first-generation college student, said Garcia’s message resonated with his family’s journey.

“The guest speaker and what she had to say was really influential,” Gramajo said. “I’m sure [my parents] really loved it. My sister, she said they were going crazy about it, but it really resonated with them ‘cause they’re not born here. They’re Guatemalan, and I’m a first born here — so all the talk about like, ‘you can be anything here,’ I think that was really impactful to them.”

Senior Ezeka Allen, Class of 2019 president, called for a moment of silence for those who died in the last four years, including Anthony Nazaire, a student at the college who was supposed to graduate in 2019. Nazaire was killed in 2016 after leaving a party at Cornell University. Nazaire was also honored with an empty seat covered with a cap and gown in the front row of the School of Business section of seated students.

Allen asked her peers to thank those who helped them in their four years at the college.

“I encourage my fellow classmates to use this occasion to let the people at Ithaca College know who supported your journey, how important they are to you,” Allen said. “Do not leave this campus without telling them; don’t do it.”

Allen also recognized the challenges that all of the students have faced to earn their degrees, particularly the first-generation graduates fulfilling the dreams of their ancestors.

“We are breaking down generational barriers,” Allen said. “That is no easy task, and I am so incredibly proud of us.”

Collado recognized graduates Gabrielle Bakkalapulo and Hannah Titlebaum as senior gift committee co-chairs. She said 362 members of the Class of 2019 donated to the class gift, which is approximately 24 percent of the senior class. The classes of 2018, 2017 and 2016 senior gifts were constituted of donations from approximately 30 percent of the class.

Senior Meghan Lyons-Dunckel said she appreciated the efficiency of the ceremony, and she thought it recognized the different student perspectives of the senior class.

“We don’t really want to leave,” she said. “It’s kind of a bittersweet moment, and I think that was really encompassed through the ceremony, so we’re waiting for it to hit still.”