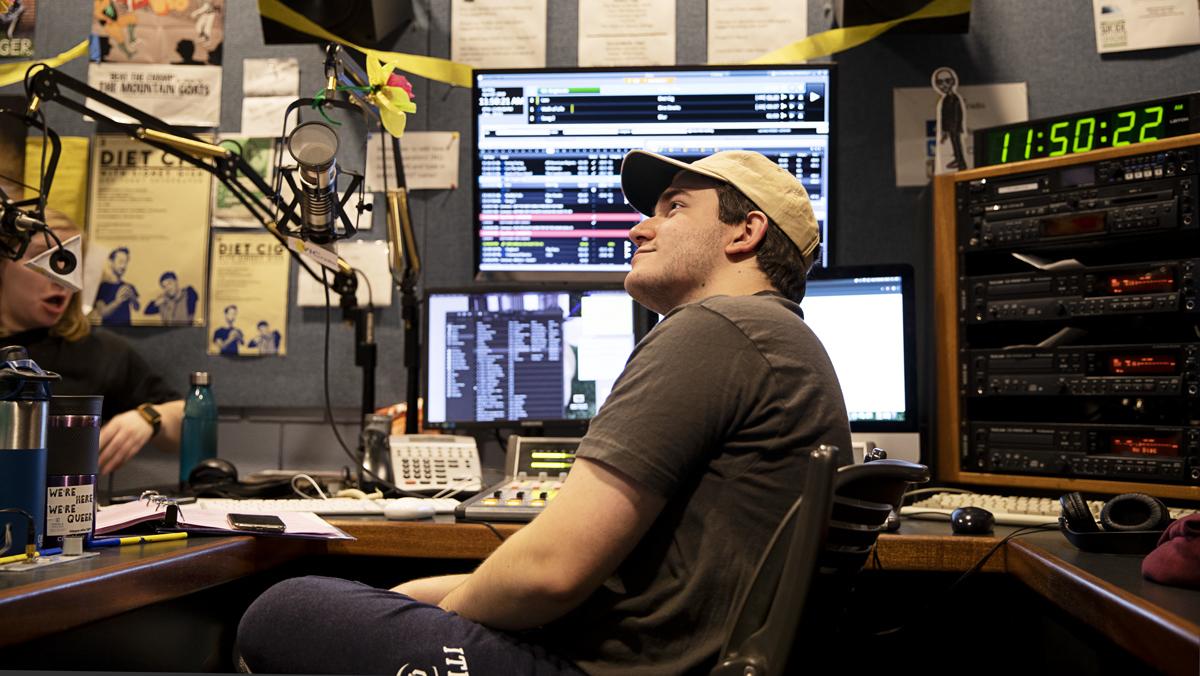 Qiuyang Chen/The Ithacan
Freshman Jake Guastafeste deejayed and acted as a board operator for VIC Radio’s 50-hour marathon, which ran April 5–7. The marathon benefited suicide prevention and crisis services. DJs are required to switch shifts every 24 hours due to regulations.
By The Ithacan
Published: April 9, 2019

The Ithaca College Library has been celebrating National Library Week from April 7 to 13 in a number of ways. Members of the college community can write short poems or share experiences on pieces of paper and hang them  on the community tree outside of the library.

From noon to 2 p.m. April 11, a button maker will be offered by the popular periodicals shelf inside the library free of charge for anyone to use, and lollipops will be offered at the service desk throughout the week. The library’s flag will fly on a special flagpole the entire week as well. National Library Week is sponsored by the American Library Association,  and libraries across the country have participated since 1958, when the week was first established. The event aims to celebrate the contributions to libraries and their staffs.

Bernard Beins, professor in the Department of Psychology at Ithaca College, has been elected president of the Eastern Psychological Association (EPA), starting in the year 2021. The association was formed in 1896 when psychologists in New York City began meeting regularly. The EPA attracts psychologists from all over the United States and Canada at its conventions.

Beins is currently a member of the EPA’s board of directors and program committee, and he is the association’s historian. The college’s psychology students have regularly attended and presented at the annual EPA convention. At the 2019 convention, 19 students from the college from five research teams presented nine posters.

Junior Sophia Adamucci, a journalism student at Ithaca College, will assume the position of editor in chief of The Ithacan for the 2019–20 academic year.

Ithaca College choir to perform concert based on murder of man

The Ithaca College Choir will present “Considering Matthew Shepard” by Craig Hella Johnson at 8:15 p.m. April 16 in Ford Hall. There will be a pre-concert lecture by Dann Coakwell, assistant professor in the Department of Music Performance, in Hockett Family Recital Hall.

Jack Wang, associate professor and chair of the Department of Writing at Ithaca College, has been awarded a two-month residency at the Historic Joy Kogawa House located in Vancouver, Canada.

The residency will take place during summer 2020, and he will work on his novel-in-progress, “The Riveters.” His novel is about Chinese Canadians who serve in both wartime industries and the military during World War II to prove their loyalty to their country and win the franchise. Joy Kogawa is known for writing “Obasan,” a novel about Japanese-Canadian internment and incarceration during World War II. The house was the Kogawa family home until 1942, when the family was interned and incarcerated.

Engaging Mental Health in People of Color (EMPOC), organized by BOLD Women’s Leadership Scholars at Ithaca College, is looking for artists of color to submit their work for its  end-of-year showcase May 2 in the lobby of Dillingham Center.

Artwork should be related to the artists’ personal relationships with self-care and mental health. EMPOC is a project that the BOLD Women’s Leadership Scholars are pursuing to help empower communities and people of color to engage with their mental health. Submissions for artwork are accepted on a rolling basis until April 12, and those interested should contact boldwomenlead@gmail.com.