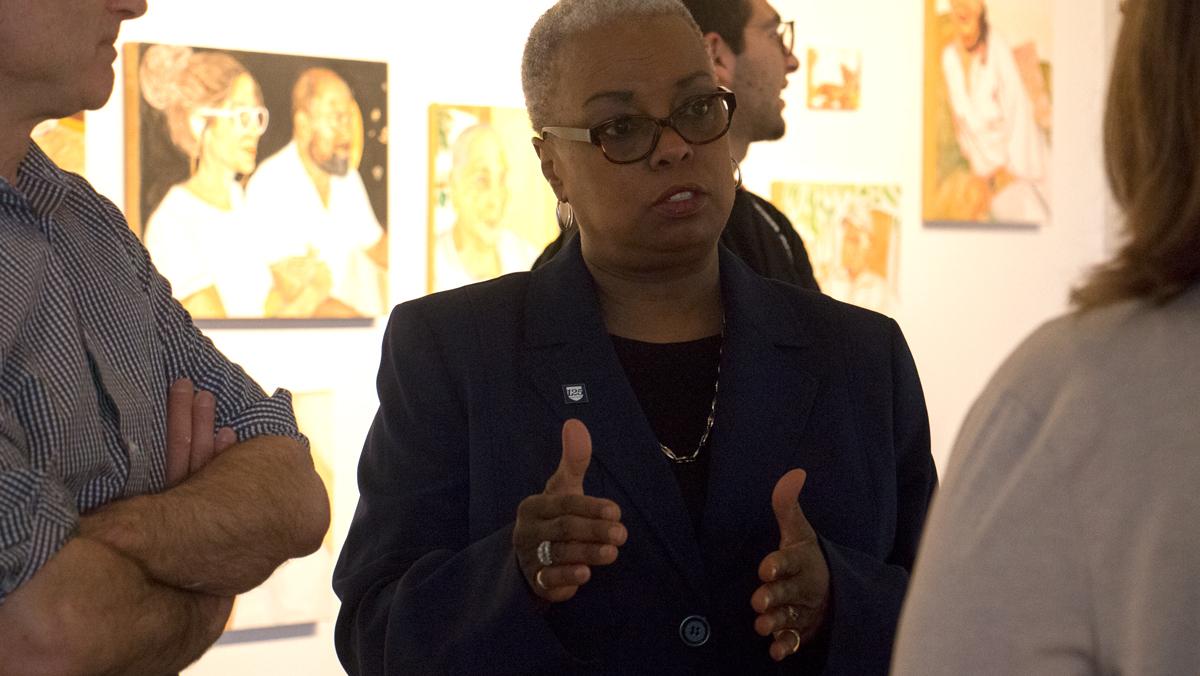 La Jerne Cornish, the new provost and senior vice president for academic affairs at Ithaca College, oriented herself to the campus community during her campus visit on May 1.

Cornish met with approximately 13 students during an open session in the lobby of Campus Center. Earlier in the day, she had meetings with faculty, staff, deans, members of the provost’s office and Ithaca College President Shirley M. Collado’s leadership team. She also met with the faculty of the Department of Education, where she may begin teaching, given the Board of Trustees approval. She also attended the Faculty Council meeting later in the day. This was the second time Cornish was on campus but the first time she officially met with the campus community.

Collado announced Cornish’s appointment to the campus community on April 25. Cornish will begin her tenure as provost on July 1. There were over 75 applicants for the position, some of whom were internal candidates, Jean Hardwick, co-chair of the selection committee and professor in the Department of Biology, said.

The search for the provost was closed, meaning the candidates would not publicly visit the college and interact with the campus community before a new provost was named. The college worked with Witt/Kieffer, a private executive search firm. The college is also working with Witt/Kieffer to select the vice president for finance and administration and the vice president and general counsel. The last provost search, which took place in 2014, was an open search, with candidates publicly visiting the campus.

Hardwick said that during the Fall semester of 2018, there were numerous listening sessions to see what the college community wanted from a provost. These desires were compiled into a leadership profile. The college was looking for someone who would be a faculty advocate, someone committed to the liberal arts in a professional setting and someone with an administrative background, Jack Powers, co-chair of the selection committee and associate professor and chair of the Department of Media Arts, Sciences and Studies, said.

Hardwick said the search committee looked for applicants who shared these values.

“Dr. Cornish was clearly at the forefront the whole way through the process,” Hardwick said.

Cornish said she was happy she met with students throughout the day because her main focus was introducing herself. She said that before making any specific plans, she needs to talk to people to gain an understanding of what they like and want to improve about the college.

“My first year really is going to be part listening tour and part things we can address relatively quickly, but again, I need to spend more time with faculty, staff and students before I can tell you exactly what it is what I’m going to do,” Cornish said.

She said the most common response she has heard from the community has been about how people love the community and the sense of teamwork at the college. She also said that she noticed community members would like to see changes with the Integrative Core Curriculum as well as changes with the lack of communication between departments. She said that throughout her career, she has learned to bring people together. She plans to provide opportunities for people across disciplines to come together to have conversations about topics that are of concern to all departments.

Cornish said she also plans to focus on strengthening the living and learning communities on campus and provide professional development support for staff in teaching roles, especially for those who teach first-year seminars. Cornish said she still needs to learn more about the current programs at the college to get a sense of what specifically needs to be done.

Sophomore Farwa Shakeel said she spoke with Cornish at the session and looks forward to working with her in the upcoming academic year. Shakeel said that as the new Student Governance Council vice president of academic affairs, she plans to keep Cornish updated on what student concerns are and anticipates to hear from Cornish about what faculty are discussing.

“I think it’s going to be really important to build a relationship with Dr. Cornish to just make sure that everything is running smoothly, that we’re communicating and that the student body feels included in any academic decisions that are made,” Shakeel said.

Senior Gabriella Malave said she appreciates that Cornish is focused on getting to know students before establishing concrete plans for the college.

“She wants to learn a lot first, so I think that’s really important,” Malave said. “She wants to talk to a lot of students and really get the feel before she makes any primary decisions about any department or initiative that she wants to bring about.”

Cornish said she has experience dealing with racial tensions in her previous position at Goucher College. In response to racial tensions on Goucher’s campus in 2014, Cornish worked with students to fulfill their demands of creating a new assistant dean position for intercultural affairs and forming a Center for Race, Equity and Identity. Cornish said she also helped form a Center for the Advancement of Scholarship and Teaching to help teachers gain strategies to change teaching practices in response to a more diverse student body. She said she is willing to confront similar work at the college.

Senior Colby Daboul said it is heartening to see that the current administration is willing to interact with students in comparison to the few times each year he would see members of the previous administration.

“I think everyone that’s kind of incoming and part of this new administration is so warm and incredibly welcoming,” he said.

Rosanna Ferro, vice president of the Division of Student Affairs and Campus Life, said she is excited to work with Cornish to ensure that the student experience is comprehensive in terms of academics and campus life. Ferro, who has been in her position at the college since October, said she has had a good relationship with Linda Petrosino, the current provost and vice president for educational affairs. However, Ferro said Petrosino did not encourage that concrete plans would be established because she was serving as an interim.

“I think it’s great to have someone come in officially,” Ferro said. “She has such a great energy.”

In the past 10 years, there have been six provosts at the college. Ben Rifkin, the previous provost and vice president for educational affairs, resigned from his role in 2016, just one year after he started the position. The most recent chief academic officer survey from the American Council on Education in 2013–14 found that 50 percent of chief academic officers stay in their position for two to five years, and only 10 percent stay in their position for more than 10 years. Cornish said that she thinks the high turnover of provosts can impact the ability to advance the mission of the college.

“One of the things that folks said in my interviews with each of the constituencies was that they wanted a provost who would stay,” Cornish said. “I’m planning to stay. I’m not planning to leave in two or three or four or five years. I plan to be here.”

Powers said he hopes stability comes out of Cornish’s appointment.

“If we could have a provost that will stay in the job and advance the mission of the college, serve as a faculty advocate, come up with strategic initiatives that we could actually implement to improve the lives of our students and our faculty, and do that consistently for five or 10 years, that’s fantastic,” Powers said.

Collado said she is excited to have Cornish as a partner to build the academic vision at the college. She said it was a great day to have Cornish on campus because classes are ending and the weather is improving, so she could interact with more students.

“The energy is palpable. I think there’s a lot of excitement about what she will bring to IC,” Collado said. “I think she’s getting a real sense of the energy and the character of the campus.”

Hardwick said she thinks Collado and Cornish’s partnership will be beneficial for the college.

“The world of higher education is going through a lot of shifts and changes with the demographics and just the cultural changes in the United States, and I think that Ithaca College also needs to adapt and be nimble,” Hardwick said. “I feel like the combination of Dr. Cornish and President Collado is really positioned to take advantage of that and to bring new visions and new ideas.”

Provost search will be closed to IC community