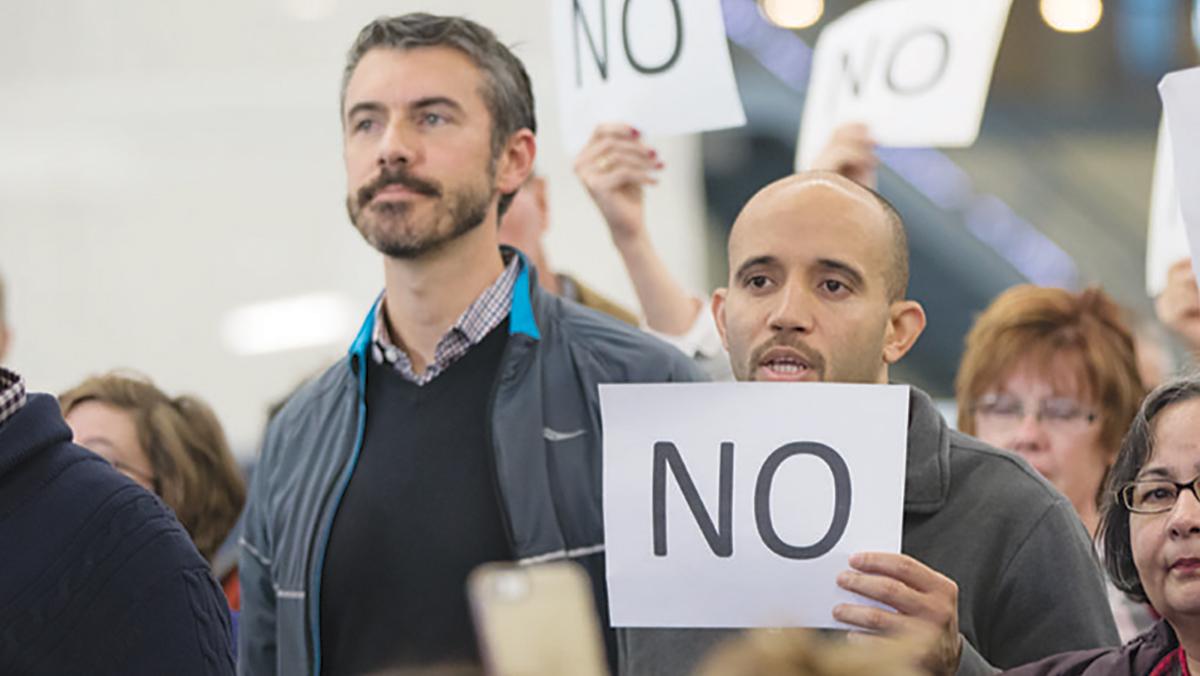 A little over a month into Ithaca College President Tom Rochon’s final academic year in office, faculty members are expressing concerns that the administration has failed to adequately address a body of grievances they voiced during the Fall 2015 semester.

A year ago, a group of faculty members signed a document citing key concerns about the core of the leadership at the college, with complaints regarding a disconnect between Rochon and the campus community; a top-down, out-of-touch approach to leadership; and low campus morale, among others. Since this open letter was published in November 2015, Rochon announced his resignation from the college, and a search for his successor began, with a new president to be selected by the end of 2016.

Despite his announcement, Rochon will continue to hold his position until July 2017, and as long as he is in office, many faculty members said these concerns will remain. These complaints, coupled with a high rate of administrative departure, contribute to an uncertain atmosphere regarding how the institution will move forward in his last year of leadership.

Carla Golden, professor in the Department of Psychology, said she believes the flight of administrators paints a dire picture for the college.

“I think you could say the college is in some type of disarray,” Golden said. “We have the type of protests we had last year and a no confidence vote in the leader of the institution, and then a decision by the [Ithaca College] Board of Trustees to ease him out, taking a year and a half to do so. You’re basically prolonging the uncertainty.”

Several of the faculty members who signed the open letter said the institutional problems that characterized Rochon’s administration will continue while he stays three semesters after announcing in January that he was leaving his position.

David Turkon, associate professor in the Department of Anthropology, said though the college has a mission statement, the campus community lacks a clear vision of how to move through this time of significant change.

“We’re an empty shell right now. We’re in an academic vacuum,” Turkon said. “We’ve got a guy at the top who has a very tight box on this college. … He’s lost his financial officer. He’s lost his provost. … Again, I can’t say why these people have left, but they weren’t feeling valued here, or needed freedom, or maybe someone gave them more money. … When I talk to other faculty — I said to a colleague at Park, it’s going to be years before this college finds itself again. She said, ‘Yeah, I agree.’ Other people agree with that. We lost our way under Tom Rochon.”

Thomas Pfaff, professor in the Department of Mathematics and Honors Program director, said he would have preferred the board of trustees remove Rochon from his position and institute an interim instead for the 2016–17 academic year.

“Moving someone else in might have cleared the air a little bit and made it easier for the next president,” Pfaff said. “What we’re in is sort of this tense waiting period.”

Patricia Rodriguez, associate professor in the Department of Politics, said she believes if Rochon and the board of trustees had genuinely listened to the protests and the no confidence votes, the president would have resigned sooner.

However, Dan Breen, chair of the English department, said it would not have been practical for Rochon to leave any earlier than he is. Breen said it is important to remember that no confidence votes are only symbolic and do not have any institutional weight.

“Given the campus climate, I think this was the best and most practical solution anyone could have hoped for,” Breen said. “Unless he committed a crime or something, I think it would have been stunning for him to leave immediately after a vote of no confidence.”

Despite this, a faculty member who asked to remain anonymous said allowing Rochon to stay in his position for 18 months after his retirement announcement only perpetuates poor leadership at a time when the institution needs to move forward.

“There are clear problems with his leadership,” they said. “Keeping a person that had so little support around for the next year means you have another year of bad leadership. … I think it would have been better to have him leave at the end of last academic year.”

At the All-College Meeting on Aug. 18, Rochon set the tone for the upcoming year of transition as the college selects its next leader. Part of Rochon’s message to the campus community was to work together to admit mistakes and move forward.

His address did not include direct mention of the three no confidence votes held against his leadership in the year prior, the protests that rocked the campus for months in the fall or the faculty outcries against the work environment at the college — factors that contributed to his resignation and the subsequent search for the next president.

“I fundamentally don’t think Tom gets what really went on in the fall,” the anonymous faculty member said. “There were a lot of problems with his leadership — what happened at the Blue Sky event and some of the diversity issues, and the protests by the students pushed it over the edge. … It’s easy to hide that no, there are actually some fundamental problems with the leadership, communication and ability to work with the campus community.”

Last year, the faculty’s open letter included several examples of Rochon’s administration’s making decisions that alienated the faculty from the academic efforts of the college. IC 20/20 and the Blue Sky Reimagining programs were cited as academically involved projects that solicited little faculty input and were not worth the time and money that was required to initiate them.

Robert Sullivan, a professor in the Department of Communications Studies, said the alleged agreement violations between the administration and Pfaff and Patricia Spencer over compensation for their roles as faculty directors highlighted poor leadership. Patricia Spencer resigned from her position as service learning director in the Office of Civic Engagement in May, claiming the administration had violated a contract agreement. Pfaff will step down from the position of director of the Honors Program at the end of the Fall 2016 semester, following disagreements over compensation and lack of support.

Sullivan, who previously served in Pfaff’s position, said he stepped down for similar reasons relating to administrative support.

“If we’re losing people that are absolutely dedicated to high-impact practices like Pat Spencer and Tom Pfaff, at what point does the institution say, ‘We’re doing something wrong, and how do we handle that?’” Sullivan asked.

Michael Twomey, Dana professor in the Department of English, said Rochon’s administration does not work as collaboratively with the faculty on faculty hiring and firing as his predecessor, Peggy Williams.

“Anything that impacts teaching and education has to be done with faculty input,” Twomey said. “And when I say input, I don’t just mean sitting down and listening to the faculty and then ignoring them and doing whatever you want. I mean actually responding and working with the faculty to make a collaborative decision.”

Since Rochon’s Jan. 28 announcement of his retirement, six other administrators have left or announced they will leave their positions.

In addition to Pfaff’s and Spencer’s stepping down from their administrative roles, Gerald Hector, former vice president for business and finance, accepted a position at Cornell University, which began Aug. 1. Benjamin Rifkin, former provost and vice president for educational affairs, left his position in July to join the faculty in the modern languages and literature department. Keith McIntosh, former associate vice president for Digital Instruction and Information Services and chief information officer, accepted a position at the University of Richmond in Virginia in July. John Bradac, former director of the Office of Career Services also left the college after 27 years to assume the role of dean of student life at Tompkins Cortland Community College.

Turkon said he believes the college has become a “steppingstone” for administrative members to establish a track record for themselves.

Rodriguez said the administration should help alleviate the sense of uncertainty and provide an honest explanation to the campus community discussing why each of the administrators has left.

The open letter from the faculty cites the five different provosts during Rochon’s administration as a source of instability for the faculty’s positions, with Rifkin as the most recent. The permanent provost will only be selected once the college’s new president is chosen and conducts a search.

“That office will essentially be in a holding pattern for two years,” Twomey said. “What does that mean for any projects that the college was thinking about? Will there be new decisions about anything? Will there be hiring of new faculty?”

Asma Barlas, a professor in the Department of Politics, said the changing of provosts has created an “aura of uncertainty” within the college’s faculty.

“If you have provosts fleeing the campus every couple of years, you can imagine that it is pretty demoralizing,” Barlas said.

A constant cycling of provosts also inhibits progress for the faculty, Sullivan said.

“Every time you have a change like that, it has an associated change,” Sullivan said. “Changes in strategy, changes in emphasis, a learning curve … and whenever you do that, it’s problematic.”

Looking back to move forward

Turkon said it would be a long time before the college exhibits the “exciting” learning environment that was present before Rochon took office in 2008.

“When I came here in 2005, Peggy Williams was the president, and she really empowered this college to find an academic heart and soul,” Turkon said. “The campus was united around that. That was slowly dismantled under Rochon.”

Turkon said that at this time, the college lacks a clear vision or mission. He said progress would come with a new president to usher in a vision for the college.

“He’s still capable of making draconian decisions that could affect us in negative ways, and I wouldn’t be surprised if he does,” Turkon said. “But we are looking forward to a year from now, when we have a new president on the campus shaping a new direction for this place.”

Twomey said that under Rochon’s predecessor, there was more collaboration with the faculty on the part of the administration.

“Even if the decision was something you didn’t agree with, you felt that you’d been listened to,” Twomey said. “That is not the case with Rochon.”

Pfaff said for the campus community to move forward, relationships between key constituencies and the top leadership at the college need to be rebuilt and that a new president — with a new vision for the college — must take hold.

“The culture right now is one of separate camps,” Pfaff said. “There is very little trust between the faculty and the administration, and that makes it very difficult to work with. You’re going to need whoever comes in to rebuild those bridges.”

Rochon could not be reached for comment by the time of publication.

President Tom Rochon is tiptoeing around this issue by giving ambiguous responses to questions that demand serious answers.

Editorial: Rochon must address critiques of his leadership