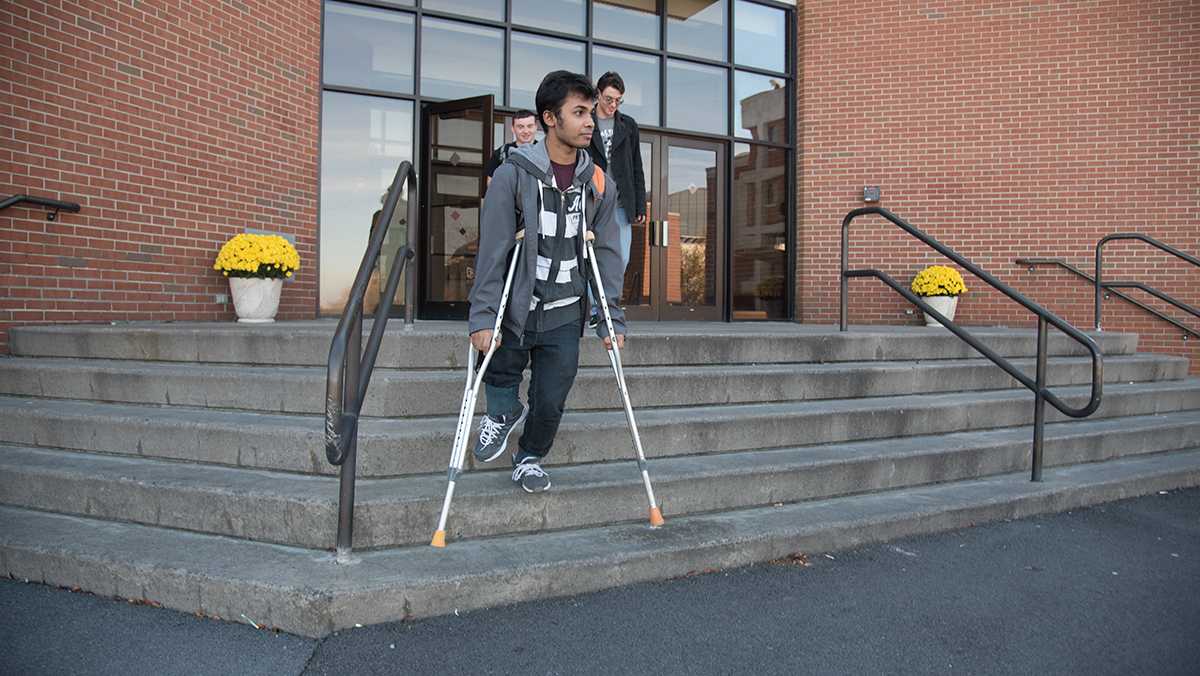 Jennifer Williams/The Ithacan
Senior Suba Chakraborty was born with a disability causing his leg to stop growth after his thigh. Chakraborty said the campus is a challenge for him to navigate.
By Maura Aleardi — Staff Writer
Published: November 18, 2015

With 16 areas on campus cited by the Office of Civil Rights as not compliant with the Americans with Disabilities Act standards, Ithaca College is currently working to resolve these issues.

The college initiated an agreement with the Office of Civil Rights on Aug. 4 to resolve all areas of the campus that are not compliant with the ADA standards, said Nancy Pringle, vice president and general counsel of legal affairs.

When a building is cited as noncompliant, it refers to specific areas, not the entire building, Pringle said. Most of the areas cited as not compliant with the ADA regulations included restrooms, electric door openers and the weight of doors, and parking lots, she said.

The Office of Civil Rights visited the college twice in 2009 to assure that the ADA standards were in place on campus, Pringle said, and provided a final list of updates required by the campus in August 2014. In return, the college created a resolution agreement, outlining potential solutions to the problems, she said. After approving the solutions, the Office of Civil Rights granted the college two years to implement the solutions, Pringle said.

The resolution agreement has three parts. The first two include small projects, such as door openers, weight of doors, restrooms and slopes getting into buildings, Pringle said. She said the first part is to be completed by Jan. 31, 2016, and the second by Sept. 1, 2016.

Pringle said the third part is probably the most costly and difficult: the parking lots. For example, she said the F Lot next to Smiddy Hall will need to undergo serious slope renovations. This project, to be completed by 2017, along with part two will take longer to complete because engineers must assess the potential renovations first, she said.

Senior Suba Chakraborty was born with a disability causing his leg to stop growth after his thigh, he said. He now uses crutches to get around.

Chakraborty said he has been waiting for these ADA changes to happen since his first year at the college. One of the main obstacles Chakraborty said he’s faced on campus is accessing Friends Hall. He said taking the stairs is the only way to get to the third floor of Friends Hall, which is something he’s had to do for at least four classes during his time at the college.

He said despite presenting feedback, he hasn’t seen accessibility improvements since his freshman year.

“They’ve tried something in the past where they wanted feedback or suggestions as to what they could do to improve the campus or classes itself. We gave a bunch, but none of them actually happened, so I’m pretty sure that is a definite, ‘No, we don’t care. We’ll make the effort to show that we might.’ But it’s just a face they put on.”

The funds for the renovations come from a $100,000 placeholder in the yearly budget, set aside for compliance issues, Pringle said. She said many of the ADA compliance renovations may be covered by that budget.

“We have some deferred maintenance on our campus. The good news for Ithaca College is that we have a really robust plan for how to address it,” Carey said. “I’m pleased with where we are.”

Carey said the administration will never defer maintenance if it is health–related. He said they work closely with Student Accessibility Services and the Office of Residential Life to ensure they make the campus accessible to all students.

Over the past two summers, Carey said the college has done renovations to rooms on campus, making them more convenient for students. He said architects are working on plans to build rooms that accommodate students with and without disabilities. He also said an elevator will be added to Friends Hall during the summer of 2016.

“What we’re trying to do now, and wherever possible, is to try to get our buildings to be accessible by our students,” Carey said.