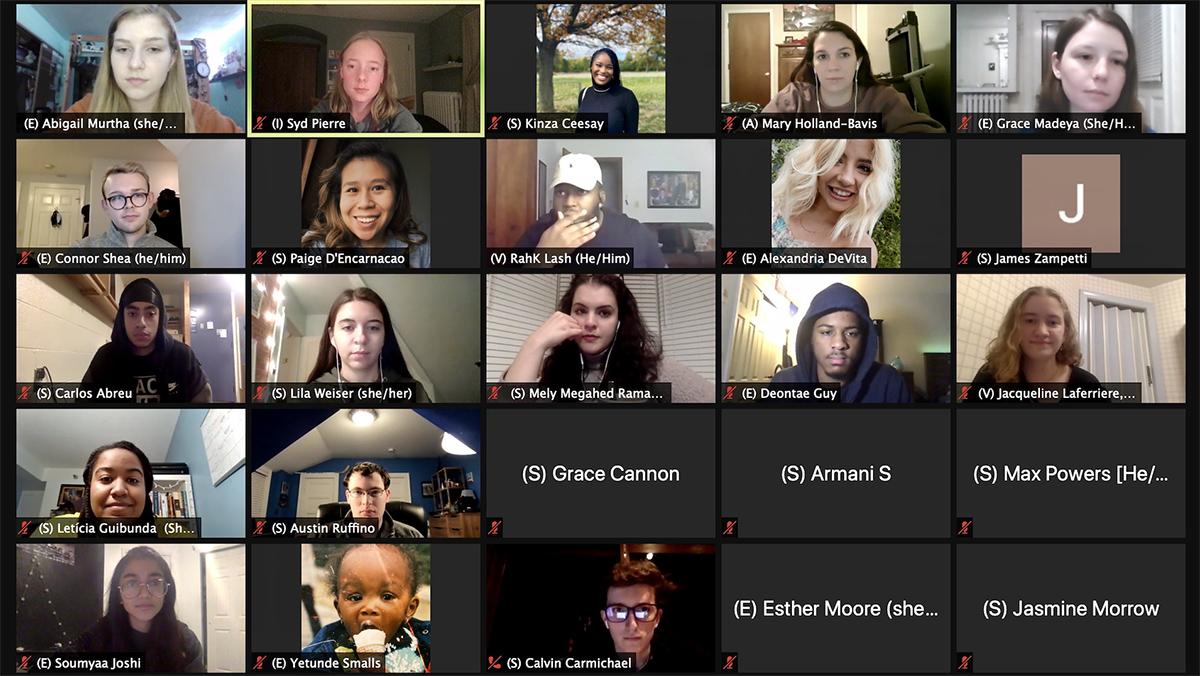 Lash mentioned the anti-racism work the Center for IDEAS did over the summer, including workshops for students and the addition of an online Diversity, Equity and Inclusion for Students course that was required for freshmen to take. Lash said the course was not a permanent solution — but a step in the right direction.

“We can’t necessarily let excellence get in the way of progress,” Lash said. “When we talk about Diversity, Equity and Inclusion initiatives, excellence is the goal. But we also have to stop and appreciate progress and not let them be skimmed over.”

Sophomore Soumyaa Joshi, vice president of academic affairs for the SGC, asked if there were any plans to expand the training to upperclassmen, faculty and staff at the college.

Lash said the course was a prototype this year and that a goal for the second year is to make sure that every student at the college is on the same page. He said that getting faculty and staff involved in the course would be more difficult.

“I’m nudging other people … from [La Jerne Cornish] to [Rosanna Ferro] to [Hierald Osorto] to say that, if you need to get faculty and staff on board with something, you need the leadership and the sustainability to do that, or else it kind of all falls to the ground,” Lash said.

Senior Yetunde Smalls, vice president of campus affairs for the SGC, asked how the SGC could work with the Center for IDEAS moving forward.

Lash said the SGC had already taken the first steps with its Stand for Justice webinar and recommended that it continues to build upon that momentum.

The SGC also passed two bills regarding the organization of the SGC’s meetings and the addition of the Community Agreement Reporting Form to syllabi.

The SGC passed the Addition of Community Agreement Reporting Form to all Academic Syllabi Recommendation with a vote of 18–0, with one abstention.

The bill recommends that faculty members include a link to the Community Agreement Reporting Form on their syllabi and remind their students about the form on the first day of classes.

The form is intended for students, faculty, staff and Ithaca community members to report and describe incidents that create concerns relating to the COVID-19 pandemic that they may have witnessed. Submissions can include details relating to the incident, like the date and time the incident occurred, and any photographic or video evidence.

“The purpose is to make sure that … all students, faculty and staff are protected from COVID-19, especially the vulnerable members in our community and the greater Ithaca community as well,” Abreu said.

The SGC also passed the 2020 Meeting Procedures Act with a vote of 17–0 with two abstentions.

The bill was put forth by the Organizational Review Committee (ORC) for the SGC, which consists of seniors Abigail Murtha, senate chair for the SGC; Connor Shea, president of the SGC; and Alexandria DeVita, chief of staff for the SGC.

The bill outlines the structure of future SGC meetings, including 20–minute time limits for guest speakers and combining discussion time with the question–and–answer portion for bills to save time.

Shea said the ORC tried to find different ways to make the meetings more efficient. The ending time of the meetings had been a large point of discussion throughout the semester because meetings have been running long. The SGC meetings do not have a set end time but generally aim to end at approximately 9 p.m. On average, meetings have been ending 15 to 30 minutes after 9 p.m.

The SGC also confirmed junior Jacqueline Laferriere as the Class of 2022 Senator, bringing its total number of senate seats filled this semester to 20 out of 25.

Laferriere ran on a platform that emphasized her past experiences working as a Peer Educator for the Center of IDEAS and her involvement with the #OpenTheBooks coalition.

The coalition, created by a group of students, faculty and staff at the college, calls for the college to release financial information, as well as for more transparency and shared governance amid impending faculty, staff and program cuts. The #OpenTheBooks movement originated in a letter signed by campus community members but has progressed to protests and virtual forums.

Laferriere said she admired the momentum the SGC had made to hold the college accountable for its claims involving anti-racist and economic justice work. She said she wants to continue to work on seeing more transparency from the administration.

When asked by Smalls about what she would recommend as solutions other than the intended layoffs, Laferriere said she wants to focus on what is impacting the college now, as opposed to in the future.

“I think we should be focusing on keeping the people that we have in our school that are important, as opposed to preemptively getting rid of them in fear of what could be coming,” Laferriere said.

Shea asked what Laferriere thought the next step for the SGC would be in terms of anti-racist work.

Laferriere said she would like to see a shift in how faculty and staff at the college are trained in anti-racist work in order to make the training more effective.