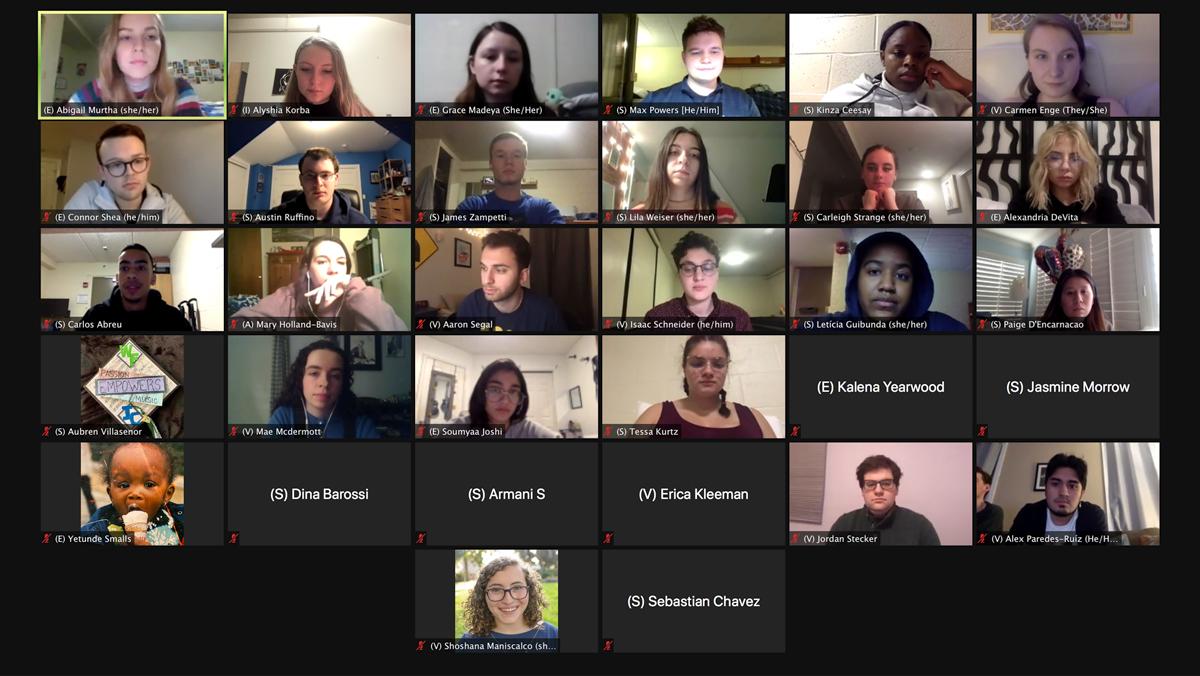 Courtesy of Student Governance Council
The SGC held a webinar Jan. 19 with the Senior Leadership Team (SLT) to discuss faculty and program cuts with students. At the SGC meeting, students expressed disappointment with the webinar, including the formatting of the meeting and how questions from students were addressed.
By Syd Pierre — Staff Writer
Published: January 27, 2021

Members of the campus community expressed concerns about the draft proposal for faculty and program cuts at the Student Governance Council (SGC) meeting Jan. 25.

The SGC held a webinar Jan. 19 with the Senior Leadership Team (SLT) to discuss faculty and program cuts with students. The Academic Program Prioritization Implementation Committee (APPIC) shared the draft proposal for the cuts Jan. 13. At the SGC meeting, students expressed disappointment with the webinar, including the formatting of the meeting and how questions from students were addressed.

Senior Carmen Enge said she was not satisfied with the format of the panel.

“Even if it did have limited topic options, it was turned into a seminar where students were even barred from the chat, where the school has continued to not be clear about financials or about who really made the choice to keep some professors on or let them go or be clear about their answers for that and the future plans for the college,” Enge said. “I’ve seen how students and professors alike are tired of seeing how the administration has had difficulty in doing exactly that and communicating on screen.”

Senior SGC President Connor Shea said he was not sure what Enge meant by students being barred from the chat. He said he would continue to share feedback about the panel directly to members of the SLT.

Enge also said she was disappointed by comments made by SGC members.

“One of the SGC members talked about formal activism in the last meeting and how Open the Books wasn’t doing activism right,” Enge said. “They said the rest of us should go to the formal channels such as the SGC or potentially get elected to SGC, like you all did to enact change from within the system.”

The Open The Books Coalition was formed to protest the cuts resulting from the Academic Program Prioritization (APP) and call for financial transparency. Over the course of the fall semester, the group held a protest and left signs and messages in chalk and marker outside the Peggy Ryan Williams Center. Collado condemned the display for vulgarity and called it unacceptable.

Sophomore Deontae Guy, vice president of communications for the SGC, said he made the statement regarding formal activism at the panel.

“So by ‘formal’, basically, I think a better word would be a ‘respectful’ way,” Guy said. “Because as SGC … there’s a certain standard that we have for our council, our school and just for voicing our opinions and things like that.”

Guy said the SGC members present on the panel tried to answer as many of the questions as they could. He said the SLT was not blocking or filtering any questions.

Senior Emma Tyme spoke about how the Department of Gerontology at the college is slated to be cut and the negative impact that would have on the college’s partnership with Longview, a retirement and assisted living facility in Ithaca.

Tyme said that around 700 students are involved in the Longview partnership. She said she was proposing a letter writing campaign with members of Longview to advocate for the continuation of the partnership.

Other visitors at the meeting sought advice from the SGC about how to address the faculty and program cuts.

Junior Mae McDermott said she was fearful of the faculty cuts happening in the Department of Writing at the college.

“I’m afraid it is going to be representative of what could happen across the school, which is a school that is already predominantly white,” McDermott said. “The vast majority of the people from my department who are being fired identifiy as women, a handful of them identify as queer and some of the already very few BIPOC professors are also being laid off.”

She said she was disturbed by the number of faculty in the Department of English who were being laid off and who have a history of advocacy with the school, such as working on the Contingent Faculty Union.

“It’s very serious, and I don’t know if the school is aware of the situations, but visas are being tested,” McDermott said. “People are not are not safe. …What’s happening is not going to be a simple thing of, ‘Oh, you’re fired; you have to move.’ People can get deported.”

McDermott said she had written to deans but did not feel like it was effective and asked SGC members for advice.

Shea said the SGC can work with students to pass legislation regarding these concerns. He noted two bills that were created out of collaboration between the SGC and students: the 2020 Ithaca College Voting Act and the Excused Absence for Poll Workers Recommendation that were both passed at the Oct. 5 meeting. The SLT at the college declined to enact both bills.

Senior Abigail Murtha, senate chair for the SGC, said the SGC could help set up conversations with students and the SLT but noted that the SGC is not on the committees involved in faculty and program cuts.

“All we can really do is support you all and put forth recommendations and speak out against everything that’s going on,” Murtha said.

Sophomore Soumyaa Joshi, vice president of academic affairs for the SGC, said she was a student member of the Academic Policies Committee (APC) at the college during the fall semester but is no longer a member. She said that at a recent APC meeting, a faculty member brought up the idea that students should feel like they are equal in decision-making processes.

Joshi said she agreed with the statement but also noted that even though she was in those conversations, she still felt like she had a limited idea of what happened at the meetings.

“I can’t even imagine what students who aren’t in those conversations feel, and I made the point to them that we can’t even start to include students in the conversation unless we’re being clear about the language in these documents and what the faculty and administration mean when they say certain things,” Joshi said.

The SGC also passed the Holiday Accommodation Policy Recommendation with a vote of 12-3. The bill was sponsored by junior Maxwell Powers, senator-at-large, and co-sponsored by junior Elizabeth Henning, senior Liz Bierly, Hillel at Ithaca College, Lighthouse Christian Fellowship and the Jewish Student Union (JSU) at the college.

The bill recommends that the college take religious holidays into account when planning for campuswide events.

“Ithaca College prides itself on being a diverse campus striving for equity and inclusion among all students,” the bill states. “However, religious diversity has not been structurally addressed across the college.”

Powers said the bill was based off of a past bill that was brought to the senate two years ago but failed to pass and was tabled.

“This bill was brought back up, basically making sure that every single faith who has been either somewhat disenfranchised, has now a voice and has a little bit more equal standing and does not have to fight it on its own,” Powers said.

The bill gave examples of previous events that have conflicted with religious holidays, including a campuswide Student Informational call Dec. 10, during Hanukkah, the 2018 Commencement held on the Jewish holiday of Shavuot and an all-campus gathering scheduled on Simchat Torah in 2018 .

The bill recommends that the college create “a campuswide policy that stresses the importance of cross-referencing these interfaith holiday dates before scheduling any campuswide events must be implemented.”

The bill also referenced similar policies put in place at other colleges and universities, such as New York University, Syracuse University and the University of Louisville.

Senior Erica Kleeman, head of communications for Hillel at Ithaca College, said the passing of the bill is important because it creates an inclusive environment at the college. Senior JSU President Jordan Stecker said students often have not been able to engage at the college due to conflicts with religious events.

Junior Leticia Guibunda, international senator, said she thought the bill was a good first step into inclusion, but was disappointed that international students were not included in the conversation more.

“I think the bill could have had a potential to be better for all of our students in our community and potentially more inclusive,” Guibunda said.

As a result of passing the Holiday Accommodation Policy Recommendation, the SGC repealed the Committee for the Advancement of Religious Equity Act with a vote of 12-0 with two abstentions.

Powers said the act was created after the original bill directed at advancing religious equity did not pass and was tabled. He said that because the latest version of the bill passed, the committee was no longer needed.

The SGC also passed the Organizational Review Timing Amendment with a vote of 14–0 with one abstention. The bill, sponsored by Powers, amended article VII section 9 in the SGC Constitution. The constitution states that the Organization Review Committee for the SGC should meet every two years. This amendment clarifies that the committee can meet more frequently if necessary.

Shea spoke about the backlash surrounding a now-deleted tweet posted by the Ithaca College Republicans following the insurrection at the U.S Capitol building Jan. 6. He said he had a productive meeting with senior Michael Deviney, president of IC Republicans.

“I have made it clear that I hope to not see a tweet like that again,” Shea said. “But know that this is not just about them. It’s about all of our organizations on campus. We want to make sure that our organizations are promoting safety and inclusivity here. … We don’t want to make our students feel unsafe or disturbed by any of our actions.”