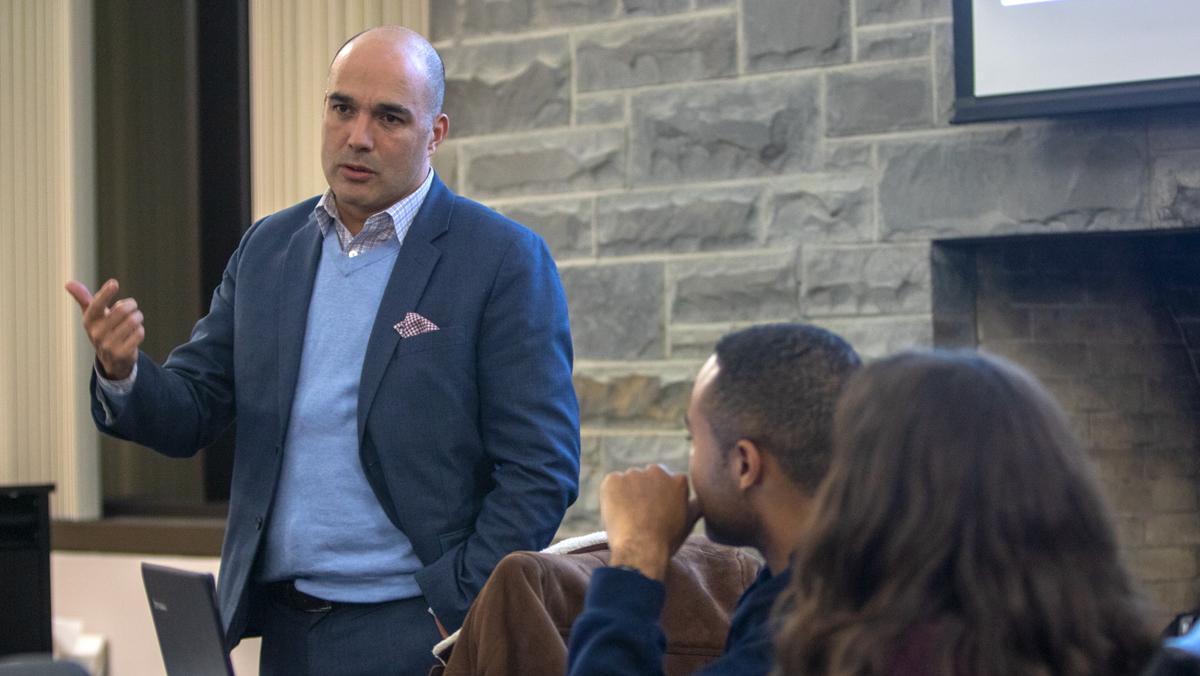 William Guerrero, vice president of the Division of Finance and Administration at Ithaca College, spoke to Student Governance Council about upcoming reforms to student meal plans, housing and affordability at its Dec. 10 meeting.

Guerrero said he has been working on dining hall reform since before incidents involving moldy bread and a knife found in soup surfaced and wants to make in–depth changes rather than just getting rid of Sodexo, the college’s food provider.

“We’ve been working on this well before the unfortunate challenges of moldy bread, or knives in soup, or all that kind of stuff that has surfaced in the last two weeks,” Guerrero said. “The challenge is the quick, rapid response of ‘Oh, we’ve got to get rid of Sodexo,’ versus the real depth and thoroughness of doing something really, really exciting.”

He said meal plans will be cheaper and a less expensive unlimited meal program will be available to all students who live on campus and are required to have meal plans. Guerrero said the changes will be put into effect Fall 2019.

Guerrero said he also plans to create a permanent food pantry and increase the quality of the dining program.

“The second step, meaning getting an on-campus food pantry, not just a mobile food pantry, resolve the allergy challenges that are growing here on campus and just the overall perception of quality,” Guerrero said. “Not just moldy bread, but the quality of the program.”

Students have had problems with dining hall food being mislabeled and have experienced allergic reactions due to cross–contamination and the mishandling of food, as previously reported by The Ithacan.

Guerrero said he knows about the problems faced in the on-campus housing due to widespread complaints, especially in the Quads and Terrace buildings, and is looking to renovate the bathrooms in the Quads and make the rooms in the Terraces bigger. He said he was also looking into renovating the Hammond Health Center. He did not give a timeline for when these plans would be put into action nor any details on how the college would pay for the renovations.

“If the numbers work out, what has been so–called ‘approved,’ the board rates next year, which I’m hoping to have, is actually a 4 percent decrease,” Guerrero said. “What I’m hoping is that, when I look at housing, I can do the same thing.”

Along with Guerrero’s presentation, the SGC senate passed a bill that will work to prevent campuswide gatherings from conflicting with major religious holidays.

Senior Rachel Steinmetz, president of Hillel at Ithaca College’s student executive board; junior Matthew Feiler, Hillel’s religious life co-chair; and sophomore Jordan Stecker, communications chair of Hillel, presented a bill to create the Committee for the Advancement of Religious Equity (CARE), with the goal of formulating a bill to discourage the college from scheduling campuswide events on major religious holidays.

The SGC senate previously tabled a bill presented by Hillel on Nov. 5 that recommended the administration check whether campuswide events coincided with specifically Jewish holidays.

The bill proposed that CARE be made up of Hierald Osorto, director of religious and spiritual life; a staff member from the Division of Student Affairs and Campus Life; a member of the Hillel executive board; two SGC senators; the vice president of Campus Affairs; a representative of the Office of the Provost; a representative of the Ithaca College Calendar Committee; and a student-at-large.

The bill stated that the Hillel Student Executive Board has the power to confirm the committee members. Hillel wanted to have that power because it sponsored the bill.

The bill also said CARE will present a bill to the SGC in 2019. The bill will include a plan to cross-reference the calendars of all religious groups on campus to prevent campuswide events from coinciding with major religious holidays of all faiths. The proposal required that the bill gain approval from the Hillel executive board before it is sent to the SGC senate.

Stecker said the reasons for requiring Hillel’s approval are that Hillel is speaking on behalf of many other religions at their request and because of the number of religious holidays that are in the Jewish faith.

“Numerous religions have come to us to ask us to speak on their behalf,” Stecker said. “We hope to further represent not only the Jewish population but other groups as well. The reason why we’re presenting this is because we have so many numerous holidays.”

Stecker said he and the rest of the Hillel executive board talked to other religious groups on campus to see if campuswide gatherings also coincided with their major holidays.

The senate passed an amendment to make the sponsors of the bill ex-officio members of CARE, making them advisory members only and unable to participate in votes. They voted to remove the clause that required the Hillel executive board members to approve of the bill before it is presented to the SGC.