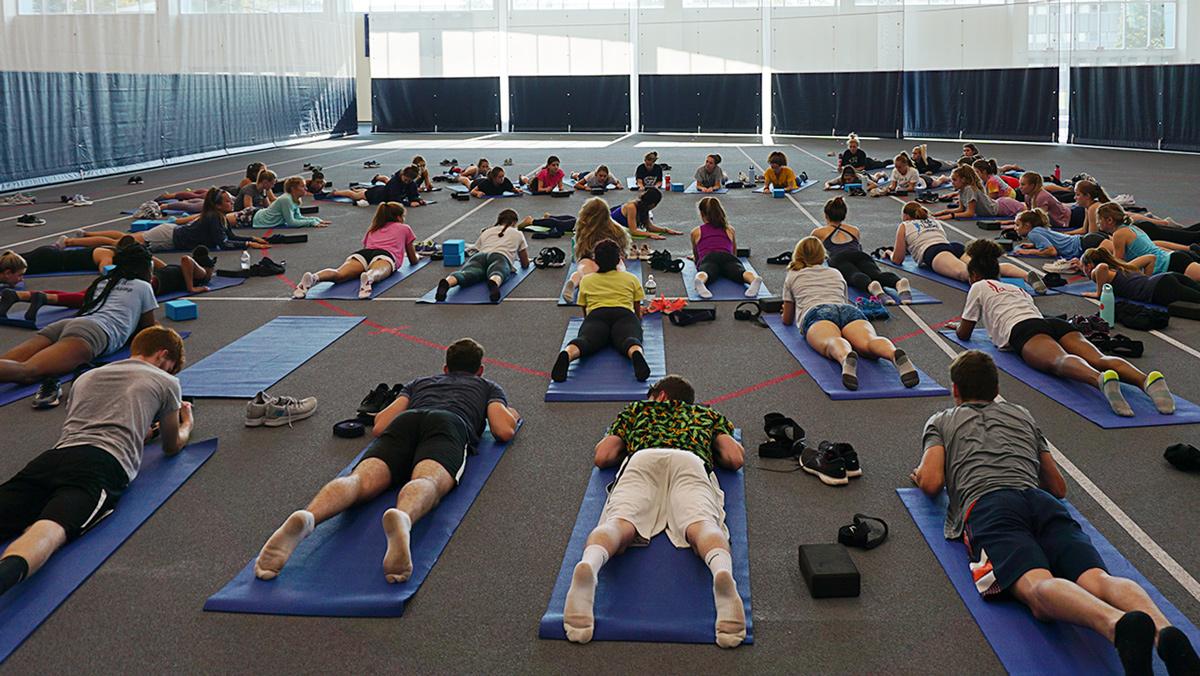 A group of Ithaca College track and field athletes surround Melissa Weiner, a local yoga instructor, as she guides them through poses and slow breathing patterns. Compared to the fast-paced and high-pressure routine the athletes endure every day, this is one hour of their week in which they can train in a relaxed environment.

Track and field, women’s soccer, men’s lacrosse and women’s field hockey are among several varsity programs that started incorporating yoga into their training regimens. Though all of these teams have similarly adopted meditation and stretching into their routines, every team implements the skills gained from yoga differently into their respective sports.

Jennifer Potter, head coach of the women’s track and field team, said she has turned to yoga for years to help her athletes strengthen skills outside of traditional training.

“Our pole vaulters and throwers do a lot of body awareness stuff, knowing where your hands and your feet relate and things like that,” Potter said. “It really has numerous benefits for our program.”

Weiner has been working with the track and field athletes for six years on a weekly basis in their off–season. Potter said Weiner initially came to her in 2013 with interest in a coaching position for the track and field team, but, when there were no open coaching spots to fill, Potter said that she was ecstatic to welcome Weiner as the team’s yoga instructor. Potter said Weiner adapts her sessions to the teams’ needs on a given day.

“I think there’s always a psychological part of every sport,” Weiner said. “It’s important to be focused and in the moment versus dwelling on the past or thinking about the future. I think it’s also important for them to be flexible, strong, able to breathe better and cope with anxiety.”

Whether the athletes are sore from lift or stressed out for finals week, Potter said Weiner teaches the team members to develop strength in both their bodies and minds.

Graduate sports in the psychology department provide psychology resources to athletes on the track and field team to educate them about mental strength in their sport. Potter said the training results in more well-rounded athletes both in their physical and mental health.

“The marriage of sports psych and yoga have really made a difference in our program,” Potter said. “It is crucial to our success and one of the many things that we try to incorporate into our training that isn’t the norm.”

The women’s field hockey team at the college occasionally incorporates regenerative stretches into its pregame practices, and it participated in a full yoga class during its preseason training.

Sophomore midfielder Grace Ziehnert said yoga refocuses the team members and allows them to set intentions for what they want in practice and their game the following day.

“We don’t really get time to go to the yoga classes on campus,” Ziehnert said. “Especially being an athlete, a lot of your time goes to your sport. It’s nice that they can incorporate it into practice. I think it helps us get into the game-ready mental space.”

Women’s soccer also implemented a two-day yoga workshop in the midst of its preseason training. It participated in energy medicine yoga, which incorporates techniques that aim to balance and align the energy field, boost the body’s healing power and alleviate physical and emotional issues.

Mindy Quigg, head coach of women’s soccer, said the yoga was more about connection and energy than it was about postures. She said she was drawn to the idea of combining yoga and energy medicine to help her athletes find a different source for strength, specifically allowing them to focus on things they can control rather than the things they can not.

“I was trying to get them on the course of this is your body — this is your energy,” Quigg said. “You can control it. And when you’re part of a team, that energy mixes. It relieves some of the pressure on their bodies and lets their minds kind of go.”

Quigg said she wants her athletes to alleviate some of the stress they are under and help them improve their communication among themselves. The athletes have participated in connectivity exercises, emulating the metaphor of energy being lost if a team member ‘disconnects’ themselves from the group.

“You have to give, you have to receive and that’s the only way the circle works,” Quigg said. “You’re connected. You guys are making the energy happen in this.”

The men’s lacrosse team introduced yoga into its program during the 2019 spring season. Senior goalie Robby Atwood said head coach Jeff Long believes in the benefits of yoga and wants the team members to work on relaxing their muscles and minds.

Though the whole team is not currently participating in yoga during its off-season, several athletes regularly attend a local studio in Ithaca to take hot yoga classes.

“We thought it was really effective when we did it at practice,” Atwood said. “We thought it would be a good idea to keep going to help us on and off the field.”

Atwood said they see positive physical results on the field such as flexibility but that, more importantly, it creates an opportunity for his teammates to bond off the field as well. He said he hopes it will help them with recovery and both physical and mental awareness.

“It’s not something that we typically thought we’d be doing for lacrosse or in general,” Atwood said. “But some of the guys really enjoy going, and we are always welcome to the idea of any type of training that can help both our mind and body.”

Commentary: Yoga is widely misappropriated in the West