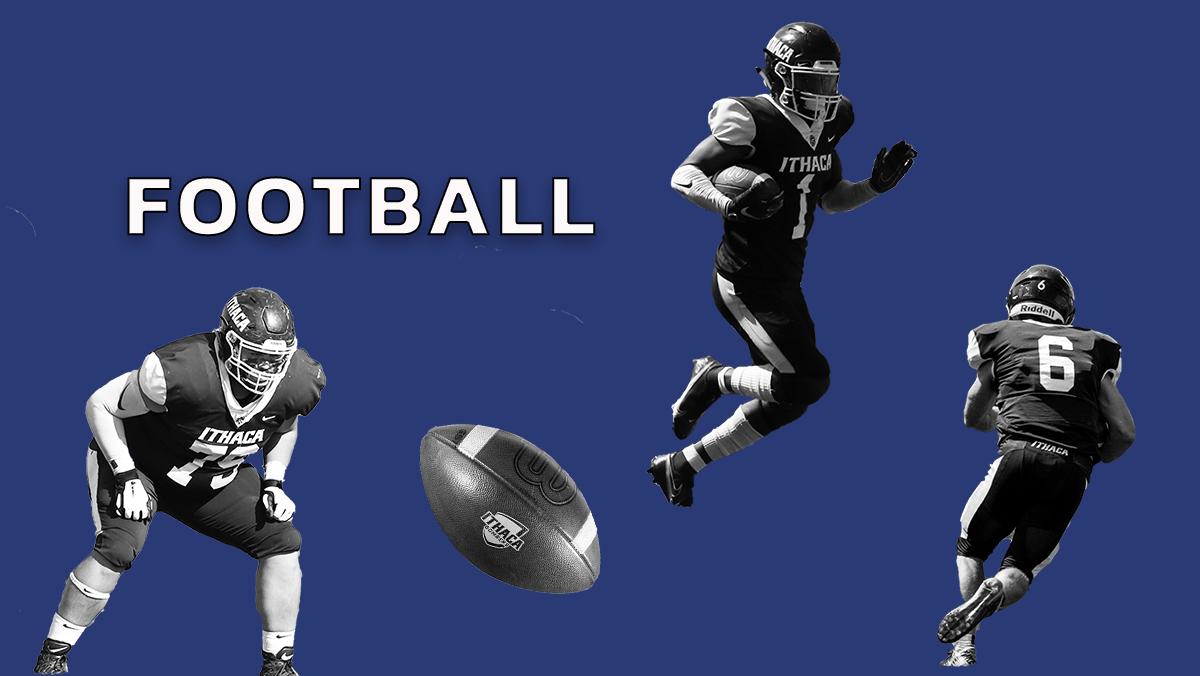 The Ithaca College football team is returning to the gridiron with a veteran group that has high expectations, along with a new head coach on the sidelines.

The Bombers will be led by Michael Toerper, who was hired by the college Feb. 18 as the 11th head coach in program history. Toerper is coming back to South Hill after being the team’s defensive coordinator from 2017 to 2019.

The squad recently arrived on campus and held its first practice of the season Aug. 11. Toerper said he was encouraged by how the group competed during its practices in the spring, and he is looking forward to working with the team as it gears up for the upcoming campaign.

“We’ve got to get to work pretty quickly to prepare for a season that’s right around the corner,” Toerper said. “You’ve got a lot of work to do in a short amount of time, … but I think we built a lot of outstanding momentum as a collective unit in the spring that we’re hoping to carry over.”

The South Hill squad enters the 2022 season ranked No. 17 in the country by D3football.com’s top-25 preseason coaches poll. The team will look to build off a 2021 season in which it finished second in the Liberty League with an 8–2 record.

Despite the Bombers’ solid year on the field, the college was not chosen by the NCAA selection committee to compete in the NCAA Division III tournament. The squad’s two losses of the season were both close games, falling 14–11 to Rensselaer Polytechnic Institute on Oct. 30, 2021, and 28–27 to SUNY Cortland on Nov. 13, 2021, in the 62nd annual Cortaca Jug Game in Cortland, New York.

Graduate student defensive back and captain Anthony Robinson, now in his fifth year with the program, said the team is motivated to bring the program back to the NCAA tournament for the first time since 2014.

“I feel like the anticipation kind of has to do with how our other seasons ended,” Robinson said. “This group of guys, even these freshmen, they understand that we’re all playing with a chip on our shoulder. And in turn, we’re just all giving it our all.”

This year’s team has a strong group of upperclassmen that are set to lead the way, including 15 graduate students. The squad’s captains for this season will be senior quarterback A.J. Wingfield and fifth-year students Robinson, offensive lineman Jake Villanueva and defensive back Michael Roumes. Villanueva said he believes the veteran presence will help the group have success this season.

“I think just having that leadership on the team will definitely be a big factor,” Villanueva said. “This is probably the closest that the team has ever been, like from top to bottom, of my four years that I’ve been here. And I think it’s just because the upperclassmen have done such a great job of embracing the underclassmen.”

Wingfield said the Bombers want to capitalize on having several veterans returning this season and use this continuity as a strength in the team’s pursuit of a postseason appearance.

“We’re super excited, and because we’re an older team, we feel like the time is kind of now,” Wingfield said. “We’re going to put the work in day by day, but we’re super excited for how far this thing can really go.”

The team will be returning several of its key contributors from the offensive line this season, including Villanueva, seniors Colin Norton and JoJo Puckey, along with juniors Anselmo Farrell and Alexander Rice. This position group helped the Bombers’ offense post a productive 2021 season, averaging 26.3 points per game, which was the third-most in the Liberty League.

The catalyst for this offensive success was Wingfield at quarterback, who completed his first year as the starter in 2021. Wingfield led the conference in passing, recording 2,383 passing yards and 16 touchdowns in 10 games.

Graduate student wide receiver Michael Anderson will also be an integral part of the team’s offensive game plan, according to Toerper. Anderson was ranked fifth in receiving numbers in the Liberty League, recording 571 total receiving yards and six touchdowns. Toerper said he is happy to have several upperclassmen coming back to South Hill this fall.

“Words can’t express how blessed I feel to have these veteran players lead this program in my first year as a head coach,” Toerper said. “I know it’s not going to be like this every year. So, I’m really soaking it all in as far as just a group that I trust, a group that is very mature, a group that has all the tools to be great leaders and lead us out of tough situations.”

The team will also look to its veteran leadership to make an impact defensively. The South Hill squad is coming off a 2021 campaign in which it was ranked as the top defense in the Liberty League, allowing an average of just 10.7 points per game. As an upperclassman on the defense, Robinson said he wants the team to focus on the task at hand and not look beyond its opponent that week.

“We do want to win the Liberty League, we want to go to the playoffs, but I think it starts with winning the day,” Robinson said. “You have to win practice, you have to win your walkthroughs and training. So as a captain, I don’t look forward to anything other than what’s in front of me.”

While the Bombers concentrate on their matchup each Saturday, there is great anticipation surrounding the 63rd Cortaca Jug against the SUNY Cortland Red Dragons, which will be held Nov. 12 at Yankee Stadium.

The colleges recently promoted the event by holding Cortaca Jug Day on July 28, before the New York Yankees took on the Kansas City Royals at Yankee Stadium. Prior to the game, Toerper and Red Dragons’ head coach Curt Fitzpatrick threw out the ceremonial first pitch. The coaches were then interviewed on the YES Network’s broadcast of the game, discussing the upcoming rivalry contest.

The game at Yankee Stadium has the chance to break the Division III football attendance record of 45,161, which was set during the 61st Cortaca Jug on Nov. 16, 2019, at MetLife Stadium. Toerper said he is looking forward to providing the players with the opportunity to compete at another historic venue.

“Even though we’re not a Division I school, the alumni, the administration, the fans [and] the student media, they make this experience feel like big-time football,” Toerper said. “I think it’s really cool, it puts us up there with the likes of giants in the college football world. And once again, proves to be a separator and differentiator between Ithaca College athletics and other Division III experiences.”

The Bombers’ first matchup of the 2022 season is set to kick off at 1 p.m. Sept. 3, as the squad will travel to take on Bridgewater State University in Bridgewater, Massachusetts.