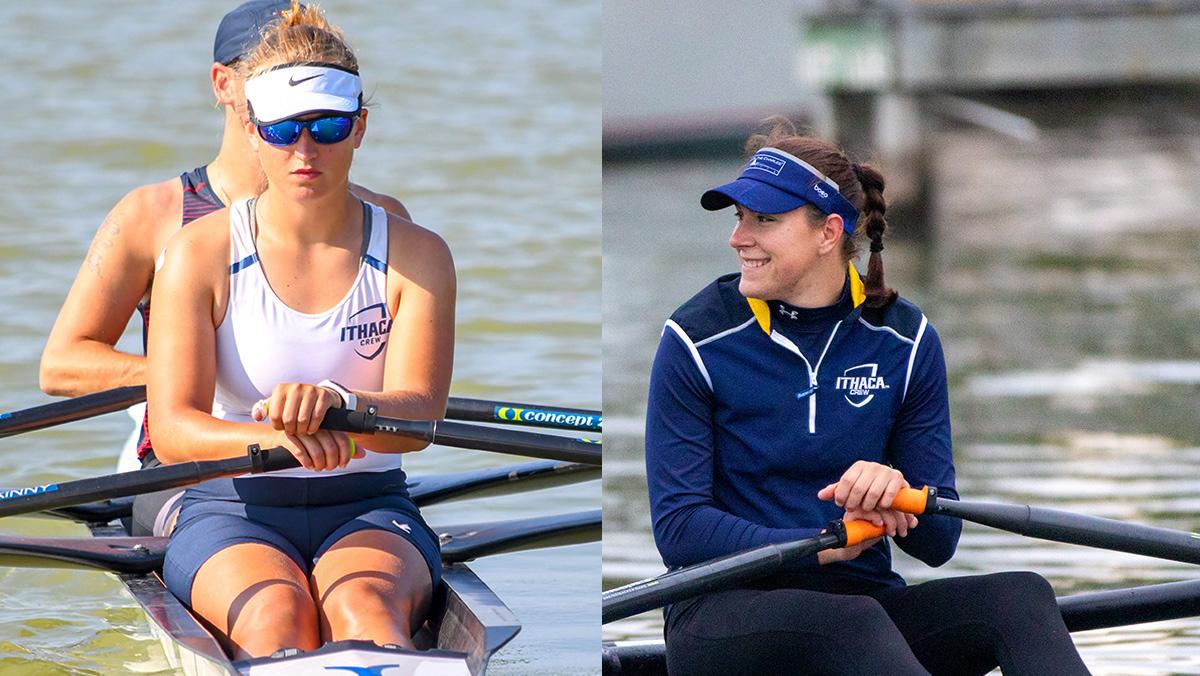 Even though their time at Ithaca College may have ended, two Ithaca College rowing alumni, Pearl Outlaw ’20 and Savanna Brija ’18 are set to pick up their oars once again, but this time for Team USA.

Both are set to compete at the annual World Rowing Championships at the end of September. The event will take place in Racice, Czech Republic, from Sept. 18–25. Outlaw competed in the World Championships in 2018 and 2019, and while Brija competed at Olympic trials in 2021, it will be her first time at the event.

Becky Robinson ’88, head coach of the college’s women’s crew and sculling teams, said that being able to coach athletes such as Outlaw and Brija are why she made the decision to coach at the college.

“It’s a great part as to why I chose to work at [the college] and in NCAA Division III,” Robinson said. “I knew Division III athletes had capabilities of rowing at that level, and here at [the college], you can compete at the collegiate level and still be prepared to row at a higher level when you graduate.”

Brija said that she would not be professionally rowing had it not been for Robinson’s guidance and her overall experience at the college.

“I absolutely loved my experience at Ithaca,” Brija said. “My experience on the team totally set me up to keep rowing at the next level, and I’m completely grateful for that.”

“In 2017, we had two alumni compete at the world championships, Emily [Morley] for the Bahamas and Meghan [Musnicki] for the U.S.,” Robinson said. “We are starting to see it more and more and that’s in large part because of the emphasis of our sculling team.”

Musnicki competed in several world championships and was a member of multiple Olympic teams, winning the gold medal in 2012 and 2016, as well as competing in 2020 for the U.S. Morley competed for the Bahamas in the 2016 Rio Olympics as well as in the 2017 World Rowing Championships.

Robinson said Brija brought a great presence to the team and helped shape the culture of sculling for the college.

“[Brija] had a commanding presence,” Robinson said. “She brought an increased level of competitiveness to the team and was in her teammates’ face in a positive way to get them going.”

Despite Outlaw having troubles with her vision, Robinson said that Outlaw was one of the strongest individuals she has ever coached.

“[Outlaw] had some visual difficulties when she first came here as her eyesight diminished through the years,” Robinson said. “That’s a huge thing for a young person to deal with and at the same time find a sport to excel and succeed at. When she gets in that boat, it doesn’t register with her that she’s blind. The amount of positivity and confidence she displayed and her ability to push through is incredible.”

Although she was born with retinitis pigmentosa in her eyes, causing her vision to slowly deteriorate, Outlaw said she had all the support from her teammates and coaches and was able to stick with rowing and continue to grow at the sport.

“I came in not at the level I’m at right now and the coach did a great job of pushing me in ways I didn’t know I needed,” Outlaw said. “Holding me to an expectation that I didn’t hold myself to helped me toughen up as an athlete.”

Having been teammates for three years at the college level, Outlaw said she knows Brija very well, both as an athlete and friend, and said she is excited to team up once again.

“When I first got to know [Brija], I knew she was going for big things ahead of her,” Outlaw said. “I know she’s been working toward this goal for a few years now and I’m really excited. I can’t wait to watch her race and have a fellow Ithacan on the national team.”

Just like Outlaw, Brija said she had the full support of Robinson, who always held her accountable and relied on her leadership.

“[Robinson] was phenomenal in guiding me and she never let me take the easy way out of anything,” Brija said. “She always pushed me to be better, even when I was good. She never gave settling as an option and she always held me to a higher standard to keep elevating my game, and I’m extremely lucky to have a coach like that.”

Robinson also said that Brija and Outlaw complimented each other and led by example, supporting their teammates, which added to the chemistry of the team.

“They both led by example,” Robinson said. “Seeing a teammate excel or overcome something difficult really adds to the team.”