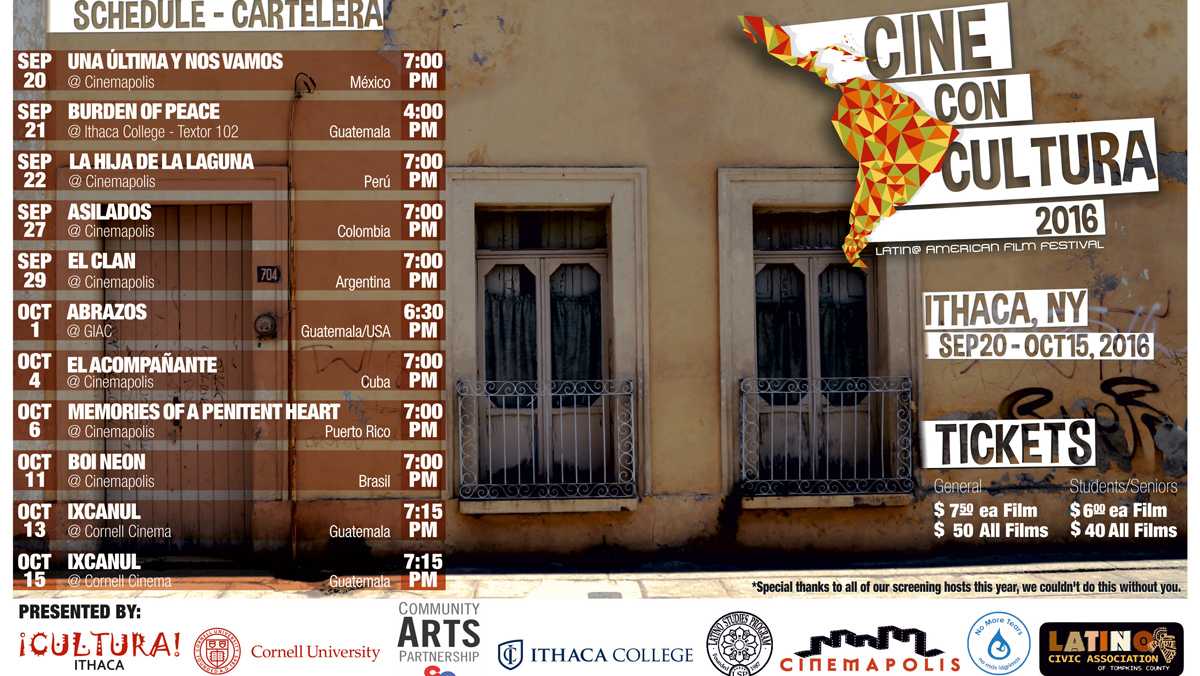 Courtesy of ¡Cultura! Ithaca
The film festival, Cine Con Cultura, features films produced in Latin American cultures. All 11 films are in Spanish or Portuguese. Tickets are $7.50 per film or $6 for seniors and students. Festival passes are $50 for all films and $40 for seniors and students. Select screenings will be shown for free.
By Mary Ford — Life and Culture Editor
Published: September 28, 2016

A boy traveling thousands of miles to meet his grandparents for the first time, a 17-year-old girl struggling against societal expectations and a woman trying to protect her land from greedy gold miners — these poignant human stories are being brought to the big screen by Cine Con Cultura, a monthlong film festival featuring films exclusively produced in Latin America.

The film festival, part of Latinx Heritage Month, began Sept. 20 and runs until Oct. 15, showing 11 films at local venues including Cinemapolis, Ithaca College, the Greater Ithaca Activities Center and Cornell Cinema. Sponsored by ¡Cultura! Ithaca, a civic group working to share Latin American culture by hosting free and low-cost artistic and educational events, Cine Con Cultura aims to showcase rich and dynamic films that audiences might otherwise not be exposed to because of where the movies were made.

Carolina Osorio Gil, director and founder of ¡Cultura!, said the festival has expanded significantly this year in terms of content — in its previous two years, there was more of a focus on classic Latin American films, which were shown only at Cinemapolis. This year, the films are more recent releases.

“Every year, we focus on newer and newer films,” she said. “Some of the films we’re showing are really new in the U.S. We’ve had films in the past that are having their U.S. premiere with us.”

Osorio Gil said she, along with other members of the committee in charge of selecting the films, have been working since April of this year to secure the viewing rights for the films they are showing. She also said other sponsors helped the festival secure the rights to specific films, including several academic departments from Ithaca College and Cornell University. The festival was also supported by the Latino Civic Association of Tompkins County.

Enrique González-Conty, assistant professor in the Department of Modern Languages and Literatures at Ithaca College, is the main organizer of the festival. He said the organizers also made a conscious effort to include more documentaries this year, creating an even split of documentary films and fictional films. He said this allowed for the screening of film selections from a greater variety of more countries across Latin America.

“Some countries in Latin America have really solid film industries,” González-Conty said. “Countries like Argentina, where the government and others give a lot of money to the film industry, tend to produce more fictional films. The documentaries focus primarily on the countries that have less money, so we use these independent film companies and crowd-funded efforts to draw attention to some social issues there.”

González-Conty said there are community talk-backs after every film, sometimes featuring live music performers or guest speakers who had been involved in the making of the film, during which the films are discussed in the context of current events and Latin American cultures.

Daniel Pfeffer, an Ithaca native and senior at Columbia University, submitted his film “Altagracia” in the Cine Con Cultura’s short–film contest this year. He said he chose his subject matter for the film, which focuses on a grandmother raising her two grandchildren, because he wanted to show a more nuanced perspective about urban Latino life.

“As a storyteller, I wanted to showcase a Latino family that did not fit under the stereotypical image and conversation idea of what America wants us to look and sound like,” Pfeffer said. “It’s a timeless story about generational differences. However, it also gives audiences another perspective on what it means to be Latino in the United States. … Our culture has a wide range of customs and characters: Being Latino is complicated.”

The goal of Pfeffer’s film aligns with what Osorio Gil said Cine Con Cultura’s greatest benefit to its audience is: to portray a diverse, multidimensional representation of Latin American culture, using films produced by Latinos.

“Having a film festival is an opportunity for me to showcase the great talent and very thought-provoking films that are made in Latin America, just to show one of the very important offerings that we have in the arts,” Osorio Gil said.

She said she hopes Cine Con Cultura will not only highlight the talent of Latin American filmmakers but also make community members aware of the depth and diversity of the Latino community, rather than falling back on stereotypes.