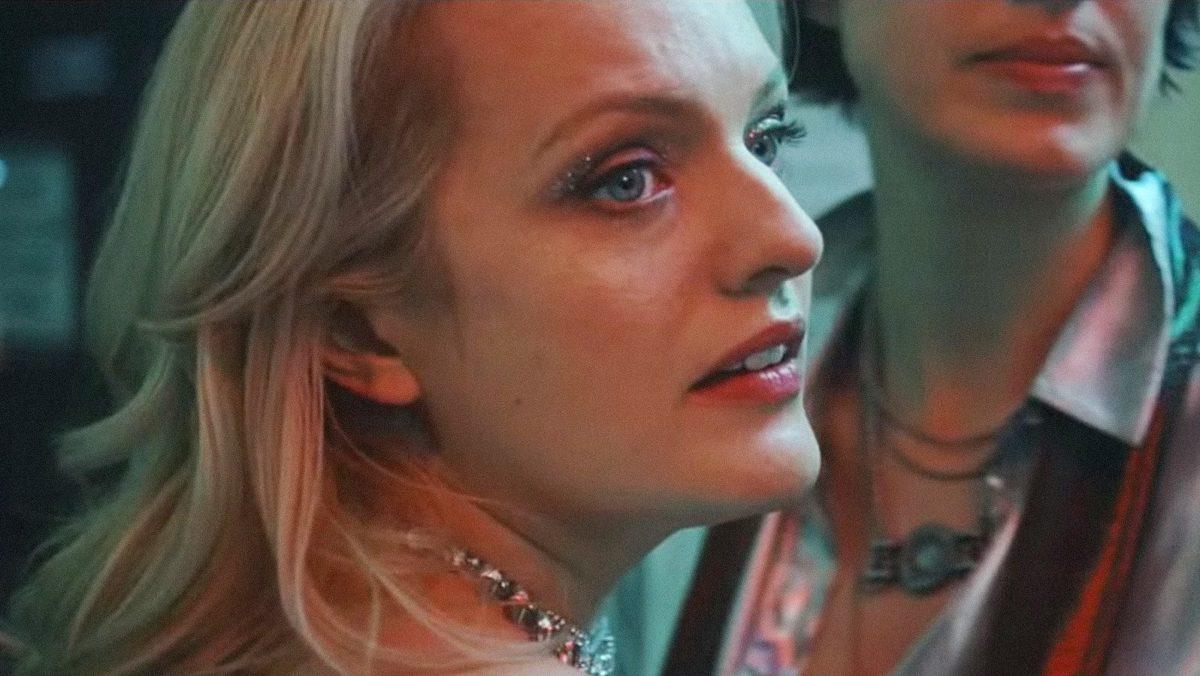 Gunpowder & Sky
"Her Smell" is sluggish, especially when compared to the chaotic lifestyle it portrays on screen. The lead actor, Elisabeth Moss, is explosive on screen and saves the film from total mediocrity.
By Emily Lussier — Assistant Proofreader
Published: April 29, 2019

“Her Smell,” an indie drama from writer and director Alex Ross Perry, is painfully slow in spite of the pure chaos it depicts. Regardless of the film’s setbacks, it is impossible not to be completely awestruck by Elisabeth Moss’ raw and captivating performance as early ’90s rocker Becky Something.

The film starts with Becky’s once mega-successful band, Something She, performing an encore at a run-down rock club called Her Smell. The song Becky sings begins with the line, “I always play with death/ I look ill but I don’t care about it.” She isn’t too far off — her crazy appearance clearly came from performing, with her hair disheveled and makeup smeared across her face — but she also appears drunk, a fitting look for an alcoholic and drug-user.

Becky’s energy doesn’t die down once the concert is over and the crowd is no longer cheering. She runs around backstage, under the influence of any number of substances, berating everyone around her over nonsensical things. This display of Becky’s erratic behavior becomes a pattern as the movie progresses, but it is unclear what is driving it — maybe it’s just the drugs and alcohol, but it feels like there is more to it. The opening scene is difficult for the audience to follow plotwise, but it certainly succeeds in capturing Becky’s unpredictability.

The movie runs for more than two hours with five lengthy acts that are separated by home video-style flashbacks to Something She’s more successful days. The first three acts are essentially different versions of the same thing — Becky’s tumultuous behavior and unavoidable downfall. In the second act, Becky is working in the studio with her bandmates, Ali (Gayle Rankin) and Marielle (Agyness Deyn), producing nothing substantial, while pushing them away. This is followed by Becky’s indisputable low point — in the span of just a few months, she’s been reduced to an opening solo for a new and younger girl group, the Akergirls. However, before she can even make it on stage, she has a violent blowout with Ali in which she smashes a bottle and tries to harm her former friend. This scene has an intensity unmatched in the rest of the film — to the point that it feels overdramatic and out of place in the storyline. Becky’s poor treatment of her friends does not bode well for her likability; however, it does make her eventual growth much more worthwhile.

Cut to the fourth act, and the audience finds Becky several years later living alone in her old home, surrounded by Something She memorabilia. Becky is visited by her ex-husband, Danny (Dan Stevens), and her daughter, Tama, played by both Clive Piotrowicz and Daisy Pugh-Weiss. The audience learns from a conversation with Danny that Becky is almost a year sober. She is also being bled dry from a number of lawsuits against her. Becky goes from rowdy and powerful to vulnerable and afraid, and Moss’ incredible acting makes this transition feel real and heartbreaking. The most emotional moment of the film comes in this act when Becky serenades Tama with a soft and vulnerable cover of Bryan Adams’ “Heaven,” which sounds like a lullaby in Becky’s version.

Though Moss has never had a singing role prior to “Her Smell,” she showcases a decently strong voice in addition to presenting her incredible acting ability once again. Moss is in good company, as many of her fellow castmates deliver excellent acting performances as well. Rankin portrays Ali perfectly as Becky’s main punching bag. Ali seems to care deeply about her friend despite Becky’s flaws. While Becky gives nothing but abhorrent behavior in early scenes, Ali’s role in the film gives the audience something to root for. Deyn also does an excellent job portraying Marielle. Her best scene is when she goes to visit Becky with Danny and Tama, and the two are able to reconnect and be emotionally vulnerable with each other.

“Her Smell” is marked by Keegan DeWitt’s eerie and somewhat distracting musical score, featuring original songs. In any scene taking place backstage at a club — which is most — the muted roar of the crowd is underpinned by unsettling electronic flourishes. Though this technique is successful in accentuating the chaos of Becky’s life, it overpowers the dialogue and serves only as an annoying distraction. The score in the first three acts is instantly juxtaposed by the fourth — Becky’s house is eerily silent, and only the sound of a boiling kettle can be heard. This contrast is an admirable creative choice, as it successfully indicates a crucial turning point in Becky’s life and character arc.

The end of the film is sweet and simple; Becky is able to reunite with her bandmates for a performance. After the three go through such lows together, it is gratifying to see them rise back up and support one another. Though Becky is hard to love at the beginning of “Her Smell” the audience will find it heartwarming to see her growth by the end.