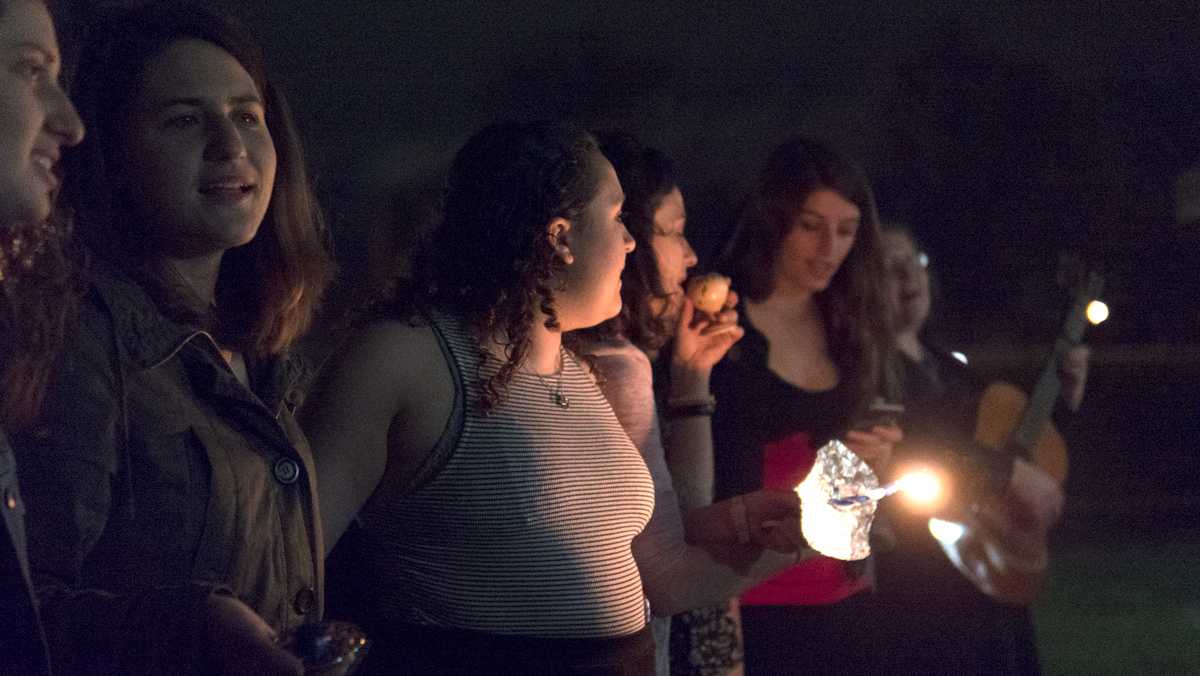 Elias Olsen/The Ithacan
Ithaca College Hillel held Havdalah services to mark the end of Shabbat on April 28. The event was semiformal and celebrated the holidays and the end of the spring semester.
By The Ithacan
Published: May 2, 2018

Paula Ioanide, associate professor at the Center for the Study of Culture, Race and Ethnicity, published an article titled “‘Why Did the White Woman Cross the Street?’ Cultural Countermeasures against Affective Forms of Racism” in Souls: A Critical Journal of Black Politics, Culture, and Society. The article theorizes cultural practices that counter implicit forms of anti-black racism.

Students and professor co-edit book about counsel to monarchy

Bob Sullivan, associate professor in the Department of Communication Studies, is the co-editor of a new book, “Thomas Elyot Four Works on Counsel: The Doctrinal of Princes,
Pasquill the Playne, Of That Knowlage Whiche Maketh a Wise Man, and the The Defence of Good Women.”

Sullivan had two editorial assistants, Julia Becker ’14 and Emily Gallik ’15, who received credit both in the table of contents and on the  title pages of two of the texts. The volume contains the first modern scholarly editions of Sir Thomas Elyot’s four most important works on the rhetoric of counsel. The volume also contains essays by the editors on Elyot’s biography and career, his influences, his rhetorical purposes and his abilities as a translator. It also contained extensive commentaries on the work.

The American Film Showcase, a special project of the U.S. State Department, has reappointed Patricia Zimmermann, professor in the Department of Media Arts, Sciences and Studies and co-director  the Finger Lakes Environmental Film Festival, as a documentary and new media expert for its film envoy program.

This appointment is Zimmermann’s eighth as a U.S. State Department Film Envoy scholar and programmer of both analog and digital documentary practices and forms. For the AFS and the U.S. State Department, Zimmermann has worked in China, Guinea and Ukraine, delivering lectures, moderating post-screening discussions and conducting workshops on documentary, new media and environmental and human rights film festivals.

The AFS brings award-winning contemporary American documentary and independent narrative films to audiences around the world, offering a view of American society and culture as seen by independent filmmakers.

Funded by a grant from the State Department’s Bureau of Educational and Cultural Affairs and administered by the University of Southern California School of Cinematic Arts, the showcase highlights the value of film in fostering understanding and cooperation, dialogue and debate. The AFS films explore diverse topics including civil rights, disabilities, social justice, sports, freedom of the press, technology and the environment.

The showcase’s objectives are to provide opportunities for audiences to  be exposed to American viewpoints on socially relevant issues, to spread an understanding of the role of filmmaking in dialogue and to encourage American filmmakers and film experts to learn about culture.

Conger’s work analyzes the cultural performance of politics across generations. For both women discussed in the article, the Philadelphia community and Benjamin Franklin provided complex audiences for their demonstrations. It explores the ways Deborah Read Franklin and Sally Franklin Bache helped construct, but were also affected by, the public resistance to the British. At separate times, they engaged in a gendered intergenerational theater of identity politics, according to her research.

John Henderson, social sciences librarian, will retire after 37 years of employment at Ithaca College to devote his time to agricultural endeavors, such as sundry crops and poultry, and to spend more time with his grandchildren.

Henderson’s time at the college will be honored at an event from 2 to 3:30 p.m. May 14 in the Gannett Center staff lounge.

Music Librarian Kristina Shanton and Sara Haefeli, associate professor in the Department of Music Theory, History and Compsition, co-authored the chapter Evaluating Editions of Printed Music for the book “Information Literacy in Music: an Instructor’s Companion.”

The chapter describes an assignment that Haefeli and Shanton created to help music students at the college assess the relative merits of different editions of music available, either through online formats or in traditional hard copy.