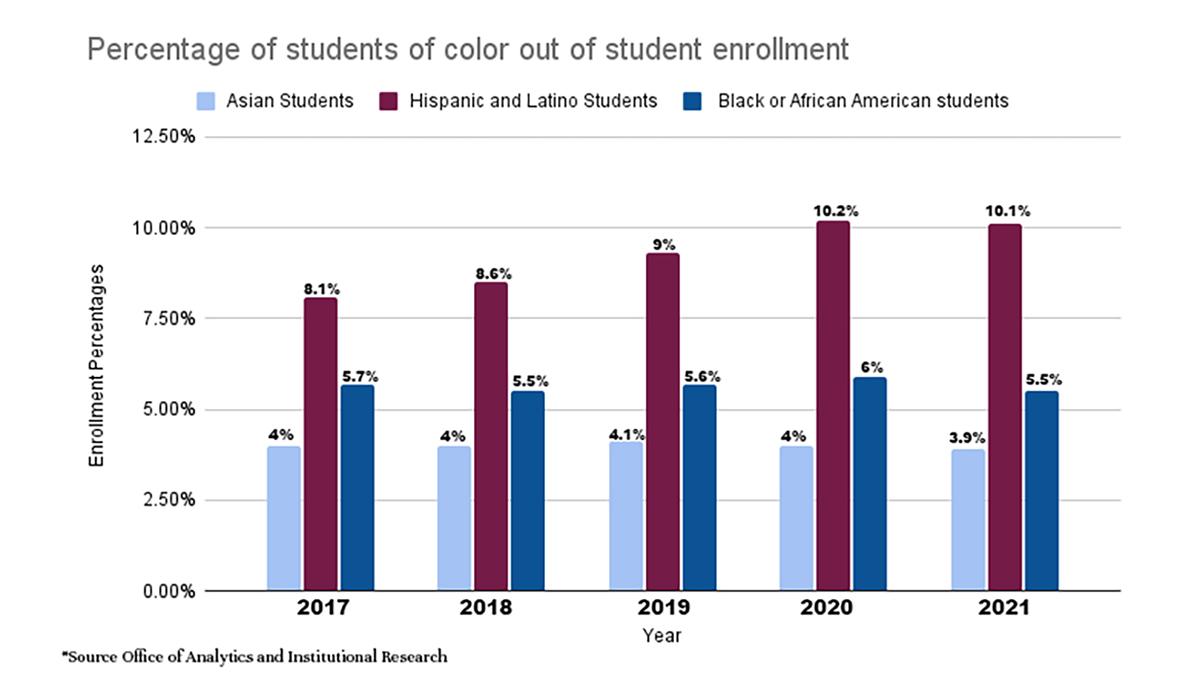 Abbey London/The Ithacan
The college is a predominantly white institution, with 3,795 white students enrolled during Fall 2021, while there are 1,223 students of color enrolled, according to AIR. Laurie Koehler, vice president for Marketing and Enrollment Strategy, Nicole Eversley Bradwell, executive director of Admission and Shana Gore, executive director of Student Financial Services said they were concerned by the recent downturn in enrollment of Black, Indigenous and students of color (BIPOC), and that it reflected a national downtrend.
By Elizabeth Kharabadze — Staff Writer
Published: November 3, 2021

Upon her arrival to Ithaca College for the first time, freshman Patty McHugh, an Asian American student, said she was confused when she could not find students who looked like her. She said it was her first time seeing the college in-person since the start of COVID-19, and she was expecting to see diversity similar to the photos depicting student life on the college’s website.

The college is a predominantly white institution, with 3,795 white students enrolled during Fall 2021, while there are 1,223 students of color enrolled, according to AIR.

Laurie Koehler, vice president for Marketing and Enrollment Strategy, Nicole Eversley Bradwell, executive director of Admission and Shana Gore, executive director of Student Financial Services said they were concerned by the recent downturn in enrollment of Black, Indigenous and students of color (BIPOC), and that it reflected a national downtrend.

Koehler, Eversley Bradwell and Gore also said Ithaca College was working to further its connections with BIPOC students. Some of the strategies include in-person regional recruitments, campus visits and working with the Commission on Independent Colleges and Universities in New York (CICU). The college also plans to eliminate the use of the College Scholarship Service (CSS) Profile for students applying to enroll in Fall 2022 and only require the Free Application for Federal Student Aid (FAFSA) for students.

“​​After analyzing data, we realized that our financial aid application requirements were serving as a barrier to many students, and disproportionately so to students from populations historically underserved by institutions of higher education — students of color, first generation and low-income household students,” they said via email.

McHugh said she often is the only student of color in her classes, which was completely different from her experience in her home state of New Jersey, where she said she experienced more diversity in the community she grew up in.

“I’m not used to being the only person of color in a room,” she said. “I feel like people are going [to schools] where they think they’ll feel comfortable and feel that there will be other people around them that look like them.”

McHugh stressed the importance of educating others on issues students of color face. She said it is important, especially in friend groups, to address any problematic viewpoints that stem from ignorance.

“I feel that if you’re not educating your friends, no one’s going to get anywhere,” she said.

There has been a history of racist incidents at the college. Some high-profile cases include a racially charged incident that occurred in a theater class in November 2019 where Anne Hamilton, former interim lecturer in the Department of Theatre Arts, asked students to write racial slurs on a whiteboard, and in December 2018, a student received backlash after using a racial slur in a video posted to Snapchat. Tom Rochon, former president of the college, stepped down in July 2017 following protests led by the group POC at IC and votes of no confidence from both faculty and students. POC at IC was created in 2015 following racist incidents that occurred while Rochon was president.

Freshman Carolina Cedraschi said she was surprised to hear of the low enrollment numbers of students of color at the college. While Cedraschi said some of her classes had a more diverse range of students, she also said there were times where she would be the only student of color in a group, like on her soccer team.

“Maybe [students of color] look at this school when they come here and they realize that they can’t find the people that they really identify with,” Cedraschi said.

One way Cedraschi said she gets involved with other students of color is through IC Mixed, a student organization which focuses on building community for students who identify as multiracial. She said the club had a positive impact on her time at the college, since it was unlike anything offered when she was in high school.

“Despite the decline in numbers, the college has so many programs that you can truly find yourself,” she said. “Anyone should just try to put themselves out there … look around to see if you like it and then just try to meet new people.”

Despite this, Bediako said prospective students of color should have an open mind about the college and the community.