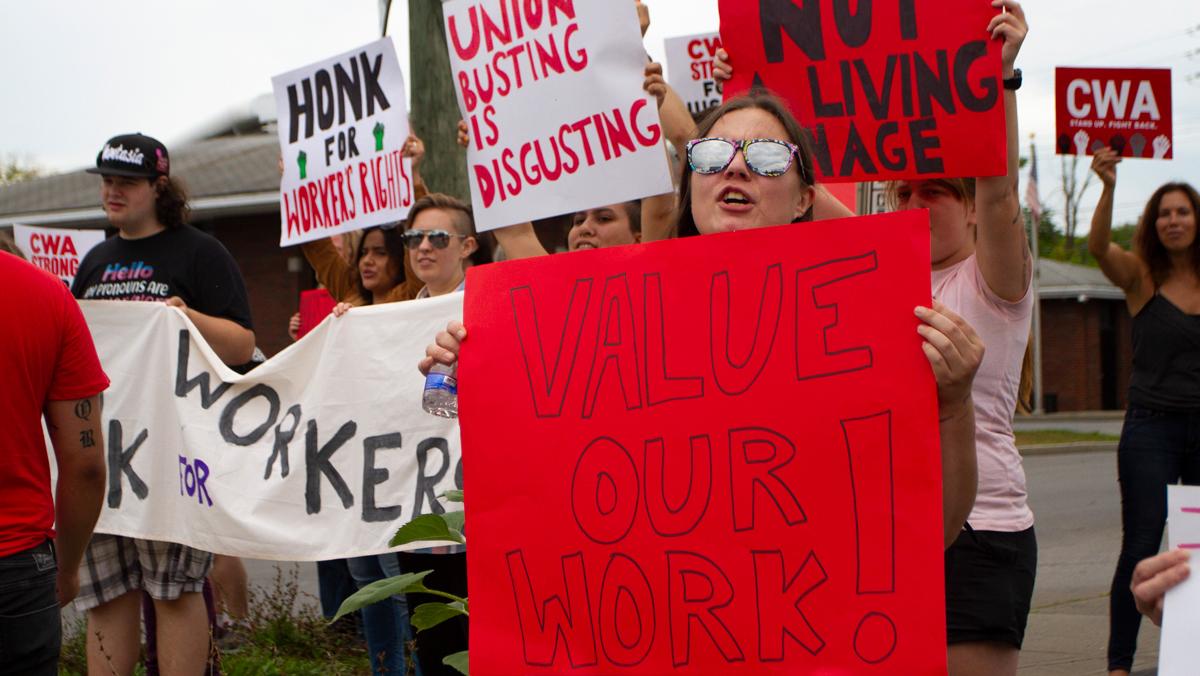 Molly Bailot/The Ithacan
Members of the Ithaca community protest unfair working conditions for GreenStar workers during a picket Sept. 15. Employees from other local businesses are also in the process of forming unions.
By Madison Fernandez — News Editor
Published: October 31, 2019

Although Ithaca is consistently ranked as one of the most liberal cities in the United States and Ithaca College is known to be a predominantly liberal institution, the community is not immune to labor rights issues.

“One of the things that … I really want to touch on is the idea of working for liberal organizations and how their image of being a liberal organization is at odds with the union–busting practices that they do,” said Megan Graham, vice chair of the Ithaca College Contingent Faculty Union and assistant professor in the Department of Writing, at the union’s first Local Labor Discussion Panel on Oct. 28.

In addition to discussing student and faculty labor rights issues on the college’s campus, the panelists spoke about attempts in the local community to form labor unions. Along with Graham discussing the union’s past and its plans for its contract renewal in 2020, other panelists included senior Alex Gray, who spoke about compensation for resident assistants at the college; Kerrie Gordon, a worker at local supermarket GreenStar, who spoke about the staffers’ attempt at unionizing; David Blatter, a graduate student at Cornell University, who discussed graduate students’ unionization; and Nicholas Sledziona, a local worker who attempted to form a union at STgenetics, his place of employment. Approximately 10 people attended, including members from the community, faculty, staff and students.

Ellen David Friedman, a local activist who moderated the discussion, commented on the low turnout at the event.

“It surprises me,” David Friedman said. “The reason it surprises me is because we have not had a moment in the labor movement in this country like the one we are experiencing now for at least 40 or 45 years. There is a moment of incredible purpose and insurgency, and impassioned militancy among workers in this country and around the world.”

In 2018, approximately 485,000 workers were involved in labor strikes, the highest number since 1986, according to the Bureau of Labor Statistics (BLS). Most recently, Chicago schools have canceled classes for over a week since more than 25,000 teachers went on strike Oct. 17, citing a lack of support staff, overcrowding in classrooms and underpayment.

The number of union members nationally has stayed relatively consistent over the past years. In 2018, 14.7 million workers belonged to unions compared to 14.8 million in 2017, according to the BLS. The BLS also reported that in 2018, New York had one of the highest union membership rates at 22.3%. Pete Meyers, director of the Tompkins County Workers’ Center, said that locally, six unionization attempts have been made in the past year, although four were not successful.

David Friedman said labor movements are critical to protect workers’ rights, including being properly compensated for labor. Nonunion workers have lower median weekly earnings than union members, according to the BLS. The living wage for a single person working full-time to live in Tompkins County is $14.28 per hour, according to the 2019 Alternatives Federal Credit Union Living Wage Study. The minimum wage in New York State is $11.10 per hour.

“We should be indignant about how precarious most of our lives are,” David Friedman said. “How close people are to financial destitution and disaster. How humiliating it is to have to put up with working conditions that are really, totally unacceptable. But you put up with them, because really, what else are you going to do? It’s this bad job, or it’s that bad job.”

Similar pushes for labor rights have been happening locally. In April, Ithaca Coffee Company announced that workers were campaigning to form a union. Workers also filed an unfair labor practices charge to the National Labor Relations Board in May. In February, Gimme! Coffee baristas ratified their first union contract. Workers at the Sciencenter officially voted Oct. 24 regarding unionization, and the results will be announced in the coming weeks. There is also a unionization push at GreenStar.

Gordon said that she has worked at GreenStar part-time for approximately four years and joined the staff advisory board last year. She said that staff members did not feel supported by human resources in terms of harassment, the implementation of policies, favoritism and managers not being trained adequately. Gordon said that a new HR manager, Erin Durdon, was hired.

Gordon said that even though there was new management, staff members still did not feel supported.

“I think it became pretty clear to me that the staff advisory board … was not effectively going to address these systemic issues,” Gordon said. “And a few of the people that were on the staff advisory board with me decided that we were going to pursue organizing to form a union because we felt like we needed a voice independent of the management structure to kind of hold management accountable, and also to have some voice in creating the policies that we would be working under.”

In July, the GreenStar workers organizing group filed charges with the National Labor Relations Board against the management, alleging that the management was attempting to thwart unionization. GreenStar employees rallied Sept. 15 to protest unfair working conditions, low wages and firings. Gordon said that the pickets have brought the issue to the attention of the community and has had a positive impact.

“I believe that this community aspect to the campaign has put enough pressure that in the last staff meeting, it was announced that we would be getting a living wage starting in January,” Gordon said.

Marilyn Chase, president of the GreenStar Board of Directors, said via email that GreenStar’s compensation structure is reviewed annually and typically goes into effect in January. She said the board is not aware of an end date for the current unionization efforts and the wage increases are independent of that.

“GreenStar is committed to paying staff a living wage and intends to continue to implement a compensation structure that does so,” she said via email. “Not only are our pay rates higher than any other retailer in the area, in 2020 our lowest rate will match the rate AFCU (a certified living wage provider) pays its employees.”

Gordon said the workers are working toward an election to vote for the union. Chase said that the only way a third–party representation like a union can be decided is by secret ballot election.

“GreenStar believes that staff have the right to choose whether or not they want a third party, such as a union to represent them,” she said via email.

The college has its own experience with unions. The Office of Public Safety and Emergency Management was the first group on campus to successfully unionize. The contingent faculty union at the college went through over a year-long negotiation process — including a strike — until a contract for a compensation increase and longer-term job security was ratified in April 2017. Prior to the contract, part-time professors were making $3,900 per three-credit course. After the contract, they make $5,225 per three-credit course, Graham said.

Graham said the main problems for contingent faculty members at the college continue to include being underpaid for equal work and a lack of job security. The union’s contract runs out in May. Graham said the union is preparing to negotiate second contracts.

“We’re going to continue to fight for justice for the faculty here at IC who do not have equal pay, who do not have job security because no one else is going to do it,” Graham said. “So that’s going to be the focus of our campaign in the spring.”

Dave Maley, director of public relations, said via email that the college looks forward to working with the union.

Labor issues can apply to students as well. Gray was an RA for three semesters at the college and is no longer working in the position. He said it was difficult to be an RA because they are not compensated hourly for their work. He said that RAs get paid for 10 hours every week but that he would often work more than that.

RAs had to work more shifts under the new orientation model in Fall 2019, a change that required them to return to campus earlier than they would have in the past. Although the compensation proposal was successful, he said RAs have raised other issues.

Although the RAs do not have a union because they are students, they do have the RA advisory board, which is led in part by some of the RA supervisors.

Freshman Nicolas Land-Kazlauskas was one of the few students who attended the event, and he said he was grateful to know there are things he can do to help promote labor rights.

“I’m just glad I can hear that there’s actual stuff I can do here and participate in this community because I honestly didn’t know if I would have that opportunity,” he said.

Protesters rally for union at Greenstar