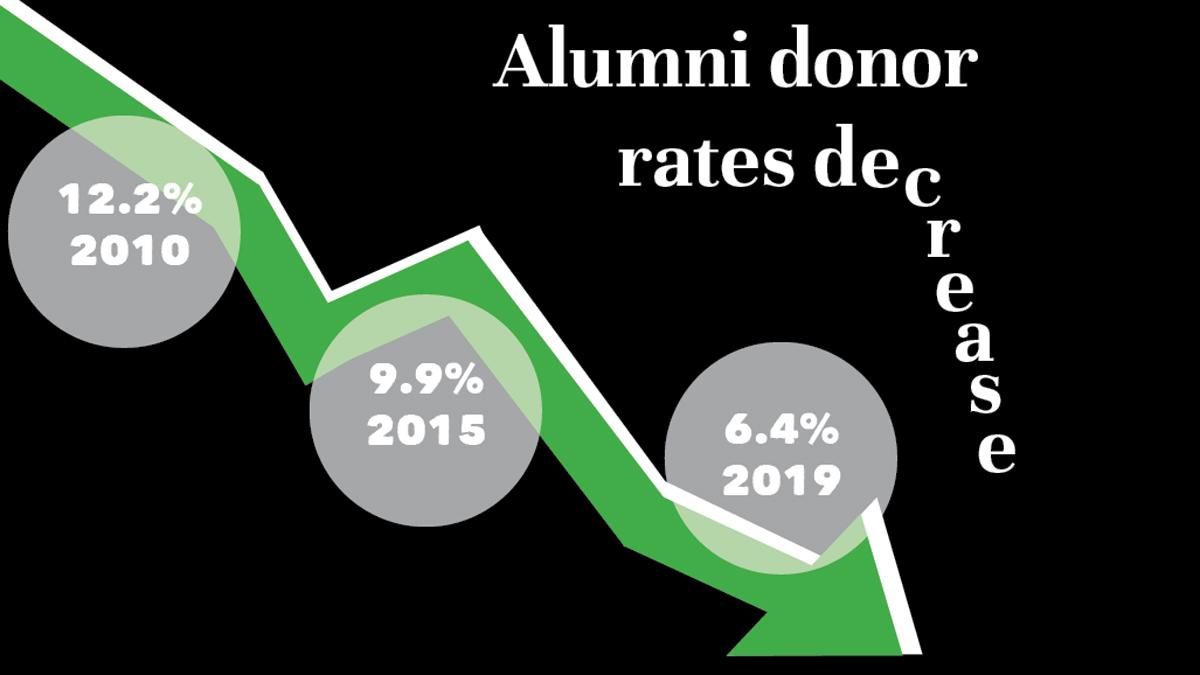 Design by Anna Costa
Dave Maley, director of public relations, said via email that the college’s alumni participation rate — the percentage of alumni who give back to the college — has decreased from 12.2% in the 2010 fiscal year to 6.4% in the 2019 fiscal year.
By Ashley Stalnecker — Assistant News Editor
Published: December 5, 2019

Over the last decade, the percentage of alumni donating to Ithaca College’s annual fund, capital projects and endowments has decreased by approximately half.

The annual fund supports the student learning experience, financial aid for students, building and grounds maintenance and student life, including student organizations, sports and counseling. Anyone, including staff, faculty members, students and family members of students, can donate to the annual fund.

Kobler said that the largest source of donations is alumni but that the current and former Ithaca College Board of Trustees members contribute greatly as well. Other donations come from corporations, foundations and individuals affiliated with the college including faculty, staff, students and families. Those who are not affiliated with the college can donate to the funds but do not make up a large percentage.

Kobler said she is paying attention to the rate. Kobler said the college has approximately 65,000 alumni. She said the annual fund total each year has been increasing despite the decline in alumni participation rate because the college has been asking specific donors to donate more.

Kobler said the college raises money for the annual fund by contacting potential donors through its phone-a-thon and direct mail. The college has approximately 60 students who operate the phone center for the phone-a-thon, Kobler said. The student workers sign a confidentiality agreement that prevents them from answering media inquiries.

“My philosophy is: It’s important that we have a healthy alumni giving percentage number,” Kobler said. “I think it really is an opportunity for us to help us engage with alumni, for alumni to feel like their degree and the value of their degree was substantial and meaningful in their life.”

To encourage more participation from alumni, Kobler organized the first Cortaca Jug Giving Challenge leading up to the 61st Cortaca Jug game at MetLife Stadium on Nov. 16. The game broke the attendance record for a Division III football game with 45,161 people, including many of the college’s alumni. Alumni and other attendees of the game were encouraged to donate to their respective colleges. Ithaca College won the challenge with 938 participants compared to SUNY Cortland’s 905 participants. The amount raised has not been totaled yet.

Kobler said the participation of alumni and money raised from during the challenge would count toward the next fiscal year’s alumni participation rate and annual fund numbers. In Spring 2020, she said, she hopes to have a day of giving challenge that will motivate people to donate more. It will be similar to the National Day of Giving or Giving Tuesday. She said she would also like to increase the annual fund through a minicampaign aimed toward faculty and staff.

Amber Stephenson, associate professor in the Healthcare Management MBA Program at Clarkson University, studied the impact of social identity on an alumni’s willingness to donate to their college after graduation in her paper, “Motivation for alumni donations: a social identity perspective on the role of branding in higher education.”

Stephenson said when colleges increased students’ abilities to identify with their school, the donations at their respective schools increased by approximately 5%. She said schools that struggle with tapping into alumni’s particular identities may have trouble getting donations.

“Identification happens at various places within a person’s experience, so colleges that may not have the ability to really tailor their messaging may not be hitting the mark for some of their alumni,” Stephenson said.

In the climate of higher education today, Stephenson said, over the past decade, it has become more common for colleges to want to brand themselves. However, when a college rebrands itself, she said, it risks isolating the alumni.

Ithaca College has recently focused on branding itself with its strategic plan, Ithaca Forever, which launched this fall. The college has also seen administrative changes, including a new president, in the last four years. The administrative changes followed a year of campuswide protests and a vote of no confidence for former President Tom Rochon.

Vanessa Drew-Branch, associate professor in the Department of Human Service Studies at Elon University, also touched on the importance of establishing identity in students in her study, “Student Engagement, Alumni Satisfaction, and Alumni Donations at a Public Four Year Institution: An Analysis of How the Undergraduate Experience Influences Alumni Donations.”

Drew-Branch said universities should aim to start developing a student’s identity with their college long before the student becomes an alum — when a student first visits the college and during their freshman orientation. In her study, she said she found that the colleges that were most successful in alumni participation rates were the colleges that could instill the sense of paying it forward and giving back to the institution during orientation.

Kobler said the college needs to do a better job of communicating that donated money will not solely benefit the institution but that it will impact the students.

Board of Trustees raises concerns about college donor base