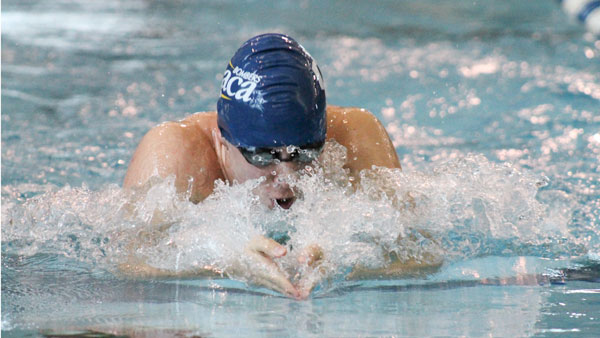 Jillian Flint/The Ithacan
Freshman Eddie Mostert swims in the 100-yard breaststroke event during the Bombers’ meet against the SUNY-Cortland Red Dragons on Nov. 2 in the Athletics and Events Center Aquatics Pavilion.
By The Ithacan — Ithacan Staff
Published: November 7, 2013

The football team defeated Frostburg State University 23–0 Nov. 2 at Butterfield Stadium. Led by a tremendous defensive performance, the Bombers shut out an opponent for the first time since week one against Moravian College last season.

The Bombers’ defense had five sacks, one interception and 12 tackles for a loss. Senior linebacker Jake Santora and graduate student linebacker Will Carter combined for 31 total tackles. The Blue and Gold held the opponent to fewer than 100 yards of total offense for the first time since Sept. 1, 2007.

The Bombers led 7–0 after the first quarter when junior quarterback Tom Dempsey hit junior wide receiver Joel Lynch for a 63-yard touchdown pass down the middle of the field. Junior cornerback Sam Carney, who also had an interception, returned a punt 67 yards to put the Bombers ahead 13–0 at halftime.

Appearing in his second varsity game, freshman running back Evan Skea rushed for a career-best 100 yards to help pace the Bombers offense. Dempsey completed 15 of 27 passes for his career-best 248 yards, with one touchdown and one interception.

The Bombers (7–1, 5–1) will take on the Salisbury University Seagulls at noon Saturday in Salisbury, Md., with the Empire 8 Conference championship and the automatic qualifier into the NCAA tournament at stake.

The men’s cross-country team also raced to a first-place finish out of eight teams at the Empire 8 Cross-Country Championships for its fourth straight crown. The Blue and Gold had three all-Empire 8 first-team selections.

Both teams have a week off before they compete in the NCAA Atlantic Region Championships on Nov. 16. in Mount Morris, N.Y.

The Bombers lost 2–0 to Rochester Institute of Technology on Oct. 30 in Rochester, N.Y. The Bombers did not open the game well, as the Tigers’ senior forward Sean Sullivan found the back of the net in the sixth minute to give his team a 1–0 lead. The rest of the game was all defense up until the 86th minute when junior midfielder Danny Bloshkin scored the second goal of the game for RIT. Freshman midfielder Scott Halpern and sophomore back Bobby Buttrick were the only two Bombers to put a shot on goal. Junior goalkeeper Jordan Gentile played all 90 minutes for the Bombers and recorded five saves.

The Bombers took another loss Nov. 2, this time to Stevens Institute of Technology in the final regular season game. The Ducks entered the game ranked No. 4 in Division III and in first place in the Empire 8. It was another bad start for the Bombers, as the Ducks’ sophomore midfielder Joe Cellitti found the back of the net in the 10th minute of the game. Cellitti added another goal in the 17th minute. The Bombers got on the board in the 67th minute with a goal from junior forward Casey Williamson, his second on the season.

On Nov. 1, the Bombers came away with victories in their games against both Lasell College and Baruch College. In the 3–1 victory against Lasell, senior outside hitter Justine Duryea had a career-high 17 kills. In the day’s second match, a 3–1 victory against Baruch, Duryea again led the Blue and Gold with 16 kills, while freshman Shaelynn Schmidt added 15 of her own.

The Blue and Gold will head to Hoboken, N.J., on Saturday to play in the Empire 8 Championship Tournament, where they will face the top-seeded Stevens Institute of Technology.

This weekend, the sculling team finished off its season, as it competed in the Collegiate Small Boat Championship in West Windsor, N.J.

Ithaca and Tufts University were the only two Division III schools at the championship. Seniors Lindsay Beatty and Julia Schaeffer finished with a time of 8:15.96, securing a sixth place finish in the doubles B final.

The teams now begins its winter training in preparation for the spring crew season in March.

The women’s soccer team fell to 14–2 on the season and missed the opportunity for a perfect conference record Oct. 30, when it lost 2–1 to St. John Fisher College. Freshman midfielder Taylor Baranowsky scored the Bombers’ only goal, and freshman forward Megan Nash picked up the assist.

The game marked the first time this season that the Blue and Gold have allowed more than one goal in a single game, ending the team’s 10-game win streak. However, the Bombers still hold the No. 1 seed in the Empire 8 tournament, and will host the conference championship Nov. 9 and Nov. 10 on Carp Wood Field.

The field hockey team earned a spot in the Empire 8 Tournament for the first time since 2009, as it finished 1–1 this week.

The Bombers began the week with Hartwick College on Nov. 2 for their final E8 matchup of the regular season. They trailed the Hawks 1–0 at half, but the Blue and Gold responded in the second half with three goals, two by senior Katie Kennedy and one from sophomore Olivia Salindong. The Bomber defense only allowed two shots in the second half, and the squad earned a 3–1 win and the third seed in the tournament.

The South Hill squad then hosted SUNY-Geneseo in its final regular season game Nov. 5, where it lost 5–1. Kennedy netted one for the Bombers in the first half, but the second half belonged to the Knights, where they tallied four of their five goals.

The Bombers finished the regular season 10–7 and will face off with the Utica College Pioneers on Saturday in E8 semifinal play.

Both the men’s and women’s swimming and diving teams defeated visiting SUNY-Cortland on Nov. 2 at the Athletics and Events Center Aquatics Pavillion.

The women’s team won by a score of 177–123, improving their record to 2–0 on the season. Junior Lyndsay Isaksen finished first in the 200-yard butterfly with a time of 2:15.31. The South Hill squad also placed first in the 400-yard freestyle relay. Sophomores Megan Zart and Lauren Cox, freshman Erin Hackett and junior Megan Buisman earned the first place finish with a time of 3:44.76. The Blue and Gold swept both diving events, graduate student Heather Markus scored 228.80 in the 1-meter dive and sophomore Emily Warfle scored 247.85 in the 3-meter dive.

The women’s team traveled Nov. 5 to William Smith College in Geneva, N.Y., to take on the Herons. The Blue and Gold sealed the win with a score of 157.5–82.5. Freshman Grace Ayer took the top spot in the 200-yard freestyle with a time of 2:01.02. Freshman Nickie Griesemer placed first in the 3-meter dive competition with a score of 238.15.

Both teams will get back to action on Nov. 23 when they travel to Clinton, N.Y., to take on Hamilton College, Hartwick College and SUNY-Geneseo in a regular-season meet.