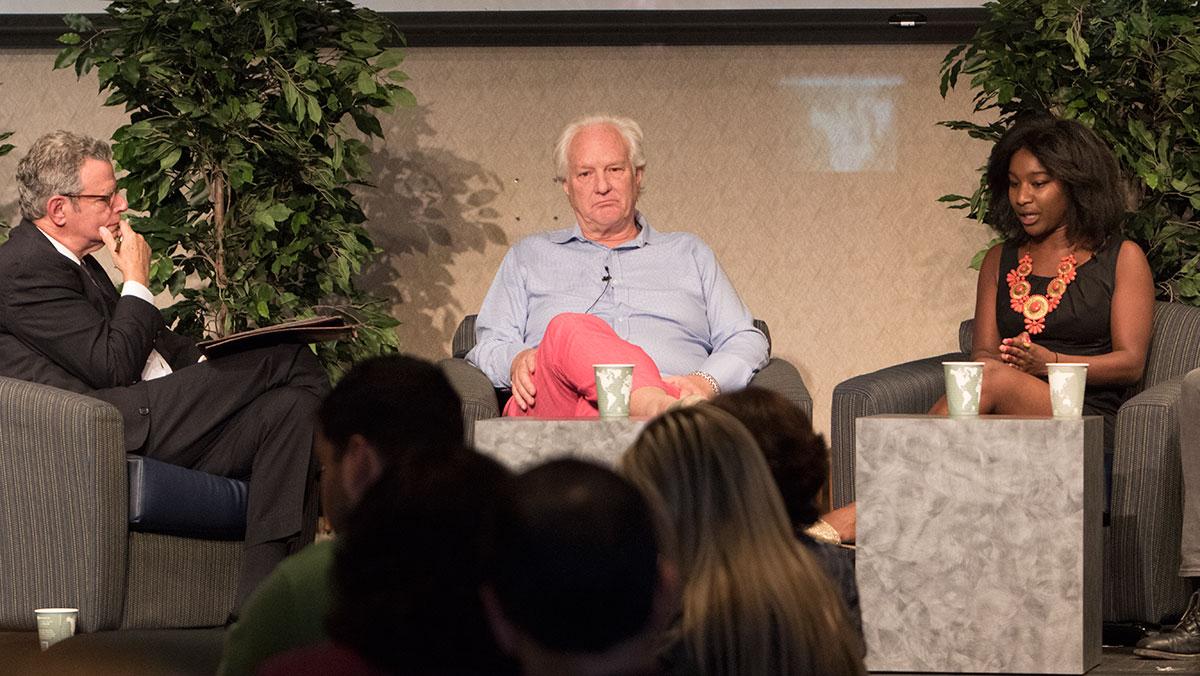 President Tom Rochon visited J. Christopher Burch ’76, CEO of Burch Creative Capital and co-founder of the Tory Burch women’s fashion label, at his resort in Sumba, Indonesia, in March to discuss how Burch’s relationship with the college would continue.

Rochon said in a statement that he and Burch discussed the events from last fall. Burch came under fire after he made racially charged remarks at the Blue Sky Reimagining Kick-Off event Oct. 8, 2015.

“I was invited by alumnus Chris Burch to be a guest in March at his resort in Sumba, Indonesia,” Rochon said in the statement. “During my visit, Chris and I were able to reflect on the events from last fall and discuss his longstanding relationship with Ithaca College. While our conversations were private, they were productive and helpful.”

The college could not respond for further comment on the duration or nature of the visit, or how the college will move forward with its relationship with Burch. David Maley, senior associate director of media relations, said the college “does not disclose that kind of information about any employee’s travel.”

Burch’s office at Burch Creative Capital could not be reached for comment after multiple attempts.

At the Blue Sky event, when describing her undergraduate experience, alumna Tatiana Sy ’09, director of events at the Downtown Ithaca Alliance, said she had a “savage hunger” to make her professional career happen. Shortly after Sy’s comment, Burch referred to her as “the savage” in the course of his remarks. The panel moderator, alumnus Bob Kur ’70, a former NBC News correspondent, also referred to her using the phrase. Near the end of the event, Burch referred to Sy as “the savage” a second time.

Sy told The Ithacan in October that she and some audience members were troubled by the repeated use of “the savage” in reference to her, labeling it as a microaggression.

Burch’s office at Burch Creative Capital released a statement Oct. 12 apologizing to Sy and the college and stating his remarks were unintentional.

This event was referenced in the buildup to widespread protests and the no confidence votes in the fall, which ended when Rochon announced his retirement in January. Rochon was criticized by students and faculty for his failure to address the remarks as they occurred. Rochon released a statement Oct. 12 that stated he had apologized to Sy and the college was committed to ensuring “an inclusive and respectful community” but “the college cannot prevent the use of hurtful language on campus.” Many members of the campus community did not believe this was enough.

Sy declined a request for comment regarding the college’s continuing relationship with Burch.

Warren Schlesinger, associate professor of accounting in the School of Business, said he was in attendance at the event in October and spoke to Sy afterward. Schlesinger said given Burch’s apology following the event, it should be accepted by the community.

“I think all of us are entitled to make mistakes — the question is whether we learn and acknowledge our mistakes,” Schlesinger said. “The college maintains a relationship with our alumni that should continue to be a learning relationship. This is a great example of that opportunity.”

He also said he believes the campus community should move past the events last fall since Burch gave an apology.

“Burch acknowledged that he created damage by his remarks — acknowledged it was not intentional on his part,” Schlesinger said. It did not excuse his remarks, and I think we as a community should accept that apology.”

Asma Barlas, professor in the Department of Politics, said she thinks Rochon should announce what he and Burch discussed.

“I am kind of a bit horrified that the president would be going off on a junket to Indonesia in the middle of all else that’s going on on our campus right now,” Barlas said. “Until he is willing to share what he and Chris Burch talked about … it just seems so extremely questionable and in very bad taste.”

Barlas also said she wants to know why the college is continuing to pursue a relationship with Burch.

“It’s not for me to say who should and shouldn’t be donating to Ithaca College, but at the very least … I would obviously want some kind of an explanation for what’s going on and why the college is so invested in pursuing this particular alumni,” Barlas said.

At the college, Burch funds an endowed scholarship — the J. Christopher Burch ’76 Endowed Scholarship for Entrepreneurship and Innovation — which was awarded for the first time in 2015–16 and will be presented every four years, said Chris Biehn, vice president for institutional advancement and communication.

In addition, Burch funds both the School of Business’ annual Business Idea and Business Plan Competitions. The funding for these does not come from an endowment, but they are currently funded so they can take place on an annual basis, Biehn said.

This year’s Business Plan Competition took place April 19. The first–place winner, Malaika Apparel, took home $20,000 and an additional $500 for Audience Choice. Malaika Apparel is a brand that is self-described as being dedicated to the empowerment of people of color through apparel. Members of the group that accepted the check onstage April 19 spoke out against Burch’s statements and Rochon’s lack of action during protests, walkouts and demonstrations throughout the fall.

Malaika Apparel declined to comment due to its continued involvement in the New York Business Plan Competition, taking place April 29.

The second-place winner, which took home a prize of $10,000, was FilmUp, a networking platform for institutions, students and professional filmmakers. FilmUp CEO Aryeh Hoppenstein declined to comment.

Taking third place with a prize of $5,000 was Sunshine Technology, an electrical audio signal modulating device for guitarists, created by senior Brandon Esteves.

“I understand that there is some conflict going on with Chris Burch and his involvement at the college, I don’t really have an extreme opinion on it,” Esteves said. “But I know the competition is unbiased. Its all inclusive, everyone has an opportunity.”

Biehn did not respond to whether or not the competitions will be continually funded in the future.

“I know that Mr. Burch continues to take an active interest in the success of Ithaca College as a whole, as well as in the success of those specific areas that benefit directly from his philanthropy,” Biehn said in an email statement.