Editorial: Protests not only reason for Rochon stepping down 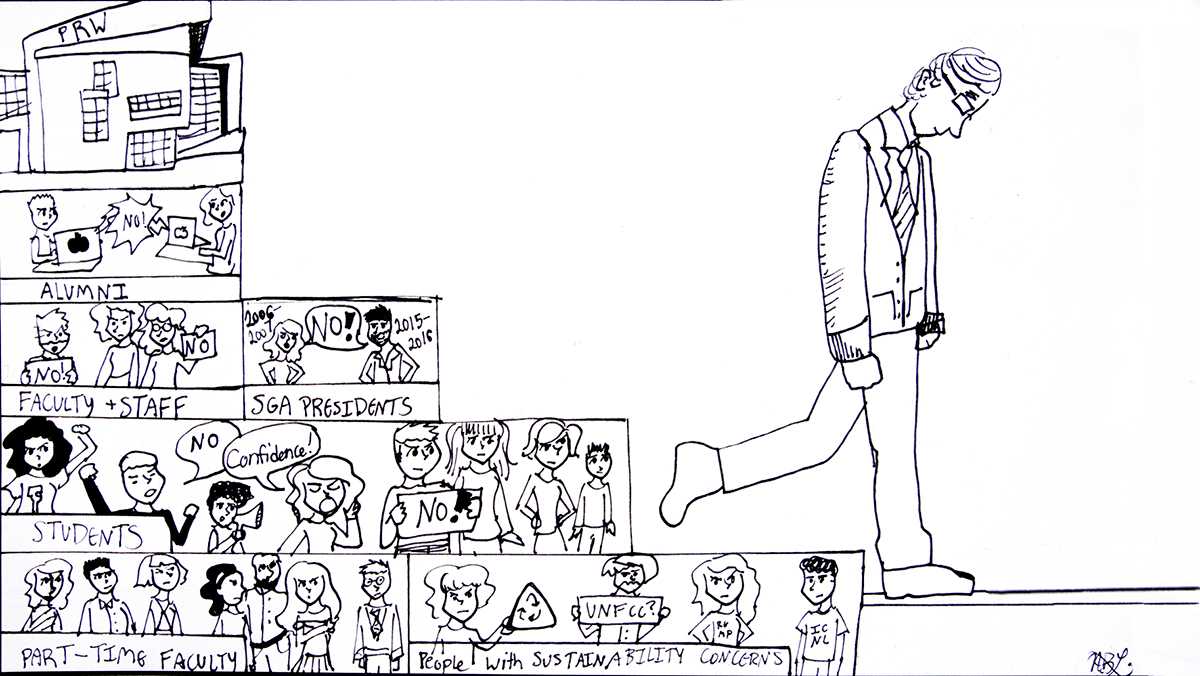 Ithaca College President Tom Rochon’s decision to step down from his position is most often associated with the image of students taking the stage at his own event to discuss “community action on racism and cultural bias” Oct. 27. If not this, then his retirement is seen as a direct response to the chants of “Tom Rochon: No confidence” while he stood at Free Speech Rock on Nov. 11.

These were crucial turning points, but there was also much more that led to his stepping down as the college’s leader: years of built-up frustration from every campus constituent finally boiling over.

Rochon faced public votes of no confidence from not just the student body, but his own faculty and staff. A long list of alumni and several sub-constituents of faculty, including part-time faculty and those concerned with sustainability initiatives, contributed additional public statements and letters issuing their grievances against him. Student Government Association presidents dating back nine years signed a letter with the consensus that Rochon was not fit to lead the college or work with those beneath him.

But meanwhile, external news media that pick up on his retirement recall the student demonstrations as the sole catalyst. The Daily Beast published a sardonic editorial attributing Rochon’s announcement to a victory by “coddled infants,” also known as “perpetually offended students.”  The Chronicle of Higher Education narrowed it down to “pressure from students and faculty members for mishandling several racially charged incidents.”

The impact of the students’ protests should not be understated. Their actions encouraged other constituents to bring to light their grievances that have been nine years in the making — complaints of a top-down leadership style, corporate-dominated Board of Trustees, misguided core curriculum and lack of attention to the needs of minority community members. They set the tone for speaking out and putting pressure on administrators to address campus issues head-on.

But neither Rochon nor the Ithaca College Board of Trustees, which sent members to campus to observe the climate for themselves, could ignore their constituents’ discontent. The conglomeration of these heated criticisms — certainly propelled by the student protests — ultimately urged Rochon to set an end date.