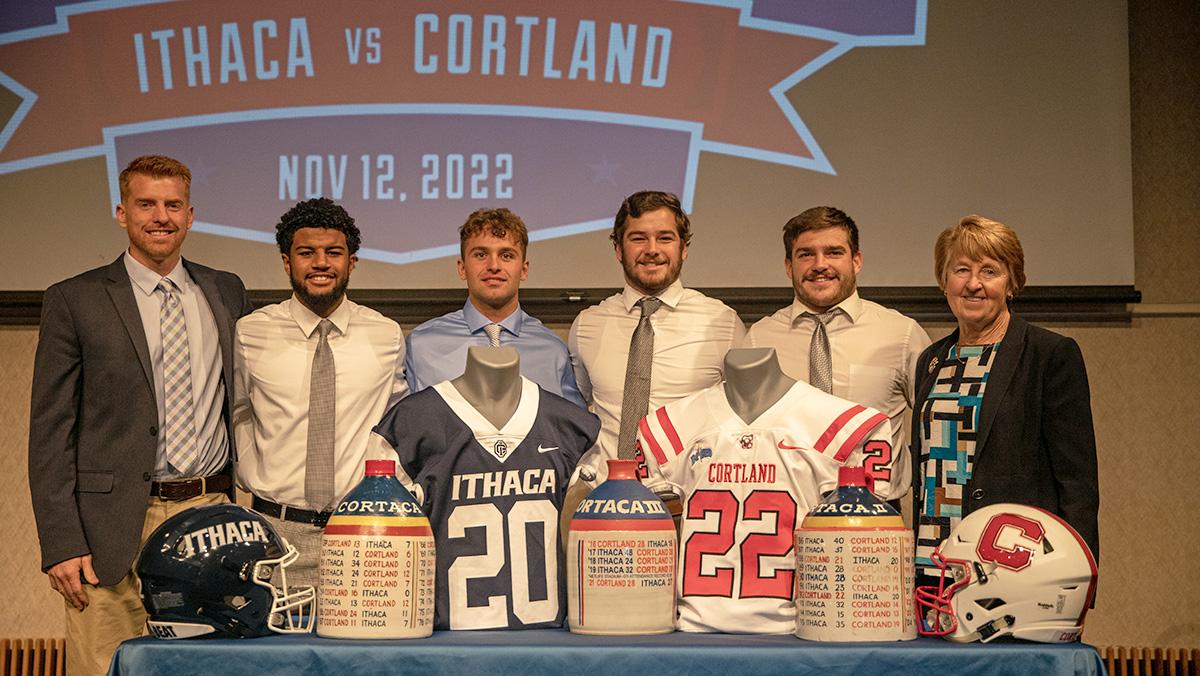 The Ithaca College and SUNY Cortland football teams held a joint press conference at noon Nov. 9 in the Emerson Suites to celebrate the quickly approaching Cortaca Jug game, which will take place at noon Nov. 12 at Yankee Stadium.

Multiple members of both teams spoke and expressed their excitement for the game and the environment. One of the biggest themes was anticipation for what might be the most competitive Cortaca game in history.

Both teams are 9–0 entering the final game of the regular season, both having won their respective conferences, and both being ranked toward the top of Division III. The Red Dragons are the No. 9/11 team in the country, while the Bombers are No. 11/12. According to Justin Lutes, associate director of Athletic Communications at Ithaca College, this is a historic feat.

“There’s only been one time where both teams have been at least 8–0 going into this game,” Lutes said. “That was in 1988. In that regular season game, Cortland won 21–20. And then three weeks later, they met in the NCAA Tournament and Ithaca won 24–17 en route to their second National Championship.”

Curt Fitzpatrick, head coach of the Red Dragons, won his first Cortaca matchup last year by a score of 28–27. This year, he said he and his team are excited for the big challenge ahead.

“This is going to be a great game,” Fitzpatrick said. “For two Division III programs to be on this stage is special, and we’re excited to be a part of it.”

Both teams also made sure to congratulate their opponent on an impressive season, no matter how deep the rivalry runs. Bombers’ head coach Michael Toerper lauded the Red Dragons for how dominant all of their victories have been this season.

“We’re looking at a team … who have won a lot of their games in convincing fashion,” Toerper said. “They’re an outstanding opponent.”

The impressive margin of victory for the Red Dragons — they have won their nine games by an average of 36.4 points and have not won by fewer than 18 — cannot be said about the Bombers after their last two games. Both of those last two, against Rensselaer Polytechnic Institute (RPI) and Union College, were won by a margin of three points.

Toerper said he believes his team’s experience in close games this season could help them in what should be a very tight matchup.

“I think we’ve had the opportunity to have our competitive stamina tested, and any time you get a chance to do that, it certainly helps for future games,” Toerper said. “But I don’t think Coach Fitzpatrick minds the way that they’re winning either. … You do your best to mentally prepare your guys for those moments and hopefully when that does occur, when those tight moments do occur, your guys have a clear mind and are able to execute.”

Members of the Red Dragons also spoke at the press conference and echoed their excitement for the matchup. Sophomore quarterback Zac Boyes was not on the team when the colleges squared off at MetLife Stadium, but he has heard stories about what to expect and said his team has been practicing with crowd noise to be prepared for the new environment.

Boyes also said that although the Red Dragons have not had to play in a close game this season, the team is not going into it with expectations of an easy win — but that does not mean they are not ready for it.

“We know how good of an opponent Ithaca [College] is,” Boyes said. “To our weaknesses is their strengths. … [But] this isn’t going to be like every other game. We’re not just going to come in and they’re definitely not going to just roll over if we go down and score on the first drive.”

In addition, the game presents a unique opportunity for students. As announced Oct. 6, YES Network will be broadcasting the game for their viewers. And just a day before the press conference, it was announced that Bruce Beck ’78 will be a part of the broadcasting team alongside four Ithaca College students.

Toerper said he is excited that the college is giving students the chance to be a part of the event, both on the field and in the press box.

“I think it’s really cool for our college to be on that main stage [and] for our student media to have this type of opportunity,” Toerper said. “At the end of the day, it’s about [the students’] experience and our players’ experience. Really, what do you get when you come to Ithaca College? You get hands-on learning, you get hands-on enrichment moments like this that you’re going to remember for the rest of your life.”

The game will take place at noon Nov. 12 at Yankee Stadium. Fans can watch the game live through YES Network or ICTV. WICB will also be providing play-by-play coverage on 91.7 FM or on the WICB app.