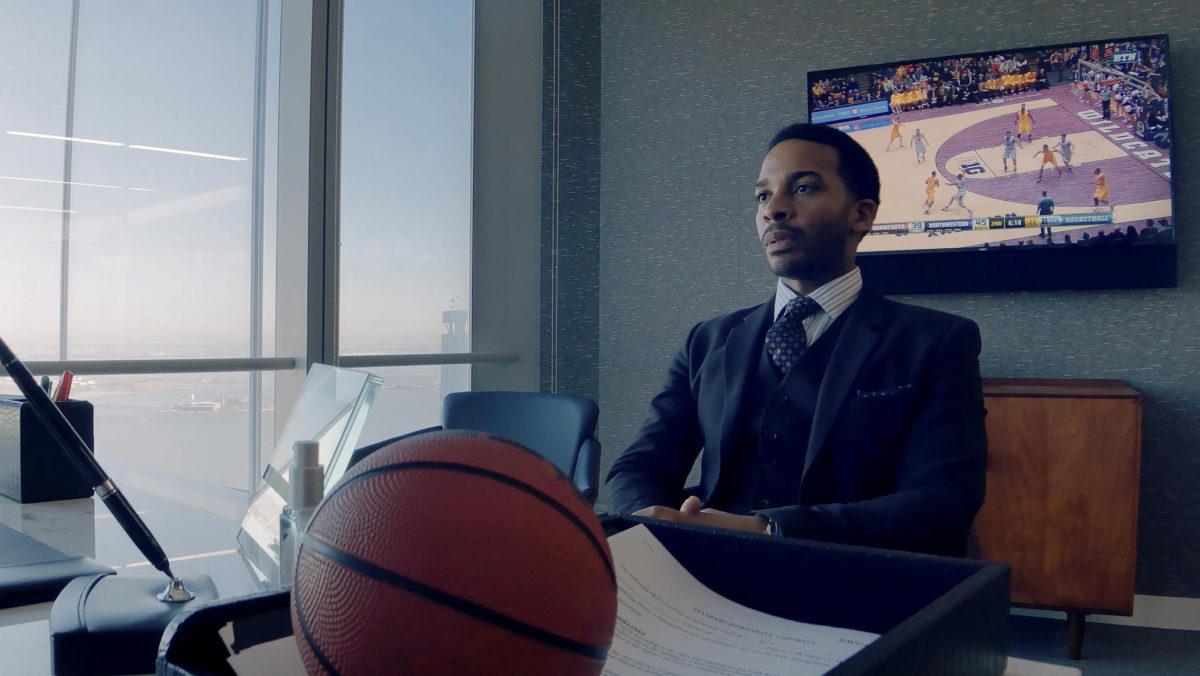 Neflix
"High Flying Bird" exposes the hidden relationship between politics and sports that is not often seen in media. The movie is a refreshing take on sport's movies.
By Noa Covell
Published: February 19, 2019

With scenes that show the determination of witty underdogs and amateur basketball players, the movie works to undermine the corporate world of the NBA. The screenplay, written by Tarell Alvin McCraney, Academy Award-winning writer of “Moonlight,” sets the stage in a world where the NBA has been in a six–month lockout about disputes over money, leaving no one balling on the courts. Because of this, people are not being paid until corporate executives and athletes reach an agreement to allocate the money fairly. This means that the corporate basketball world is stressed, and people’s jobs are in jeopardy.

In response, rookie basketball player Erick Scott (Melvin Gregg) and his agent Ray Burke (Andre Holland) set out to upend the NBA. Ray implores Erick to go down a risky path as he pushes for the young basketball player to debut in a pro game. Not only that, but Ray tells his pupil to lay low and stick to tradition so they can operate under the radar. As the media covers the lockout, Erick and Ray work to align themselves to the stereotypical basketball culture of sneakerheads and rap songs to try to progress their careers forward while the NBA is still in a stalemate.

Themes in this movie cover more than just the sweatbands and the tattooed, tall guys of the NBA. “High Flying Bird,” directed by Steven Soderbergh, takes audience members beneath the surface level of the NBA to give critiques of the behind–the–scenes activity of the corporate, and sometimes corrupt, lifestyle of basketball. “High Flying Bird” shifts the vacuum of power from the hands of capitalists to the hands of the players looking to correct all that is wrong. These aspects of the film, among many others, are what set this film apart from other sports movies.

The message of this movie has been a long time coming. It stands out from other classic sports movies like “Bend it like Beckham” and “Moneyball” because the message behind “High Flying Bird” critiques the corporate inner workings of the sports industry and what keeps the capital of professional sports alive and running. This criticism of the relationship between the sports industry and the support from wealthy partnerships and elite sponsorships is one that is scarcely seen in sports movies. However, without the driving factor of capitalism, there would be no sports world. This film was able to balance both the business and athletes’ perspectives to capture a full circle experience of the sports world. By utilizing cinematography tactics like shifting from a business room to a shot of a dimly-lit high school basketball court, the movie depicts this balance of power in a perfect way, allowing the importance of both sides of the industry to shine through.

The authentic character development also aided in depicting this dynamic. The movie includes points of view from public sports figures like Reggie Jackson, Karl-Anthony Towns and Donovan Mitchell to define the hurdles they overcame while they were rookies. Providing anecdotal clips of public figures in the sphere of professional sports brought the importance of the movie back into the real world to describe real-life instances. The movie is able to explain experiences the sports figures had when overcoming issues with the capitalist structure of their sport.

Soderbergh took a half–court shot and scored with “High Flying Bird.” He was able to make a movie with the perfect balance of both corporate and athletic perspectives. It’s emphasized through the film that progress is not single–handedly brought about by men in business suits, but also by rookie basketball players driven by passion. When there is balance between the two, that’s when shooters can confidently take the game–winning shots.