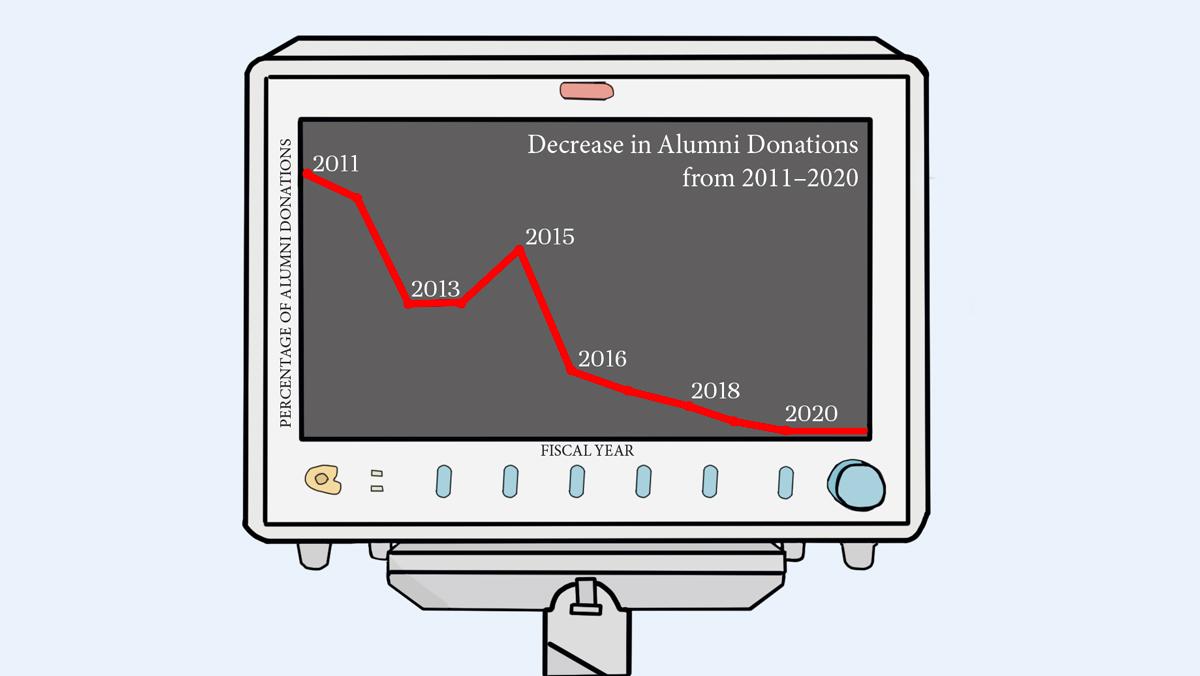 Abbey London/The Ithacan
Between 2010 and 2019, the percentage of alumni who donated dropped by about half. In 2010, the rate was 12.2% and in 2019, it was 6.4%. Wendy Kobler, vice president for Philanthropy and Engagement, said the percentage was stabilizing between 6.2% to 6.4%, but for the 2020 fiscal year, the rate was 6.2%. While the national average rate of alumni who donate back to their college is only 8%, Ithaca College still falls below the average. The last year the college had an alumni donation percentage above 8% was 2015.
By Caitlin Holtzman, Olivia Stanzl — News Editor, Staff Writer
Published: November 4, 2021

The rate of Ithaca College alumni donating back to the college is stabilizing after years of decreases — but it is stabilizing at a percentage lower than the national average.

Between 2010 and 2019, the percentage of alumni who donated dropped by about half. In 2010, the rate was 12.2% and in 2019, it was 6.4%. Wendy Kobler, vice president for Philanthropy and Engagement, said the percentage was stabilizing between 6.2% to 6.4%, but for the 2020 fiscal year, the rate was 6.2%. While the national average rate of alumni who donate back to their college is only 8%, Ithaca College still falls below the average. The last year the college had an alumni donation percentage above 8% was 2015.

The college uses initiatives like Ithaca College Giving Day and the Cortaca Jug games at MetLife and Yankee Stadium to encourage students to get alumni, friends and family to donate. Before the 2019 Cortaca Jug game, Ithaca College and SUNY Cortland held a Cortaca Jug Giving Challenge where Ithaca College won with 938 gifts and received a $150 donation from SUNY Cortland. During Giving Day there are leaderboards between the five schools and campus organizations to see who can bring in the most money. The college also has different “challenges” like which student, employee and alumni has the most donors and most dollars. Last Giving Day, which was held May 4, 2021, raised over $1 million. There were 3,459 donors who donated a total of $1,856,451. In May, Kobler said she did not expect the number of alumni who donate to decrease.

The college also plans to hold a Giving Tuesday challenge Nov. 30. In order to generate more alumni engagement, Kobler said the college reaches out to alumni through direct mail and email solicitation.

Linda Sauter Velto ’88 said she was a consistent donor to the college but said the changes made by the Academic Program Prioritization (APP) process have caused her to question if she wants to continue donating.

The APP process began in September 2020 with the creation of the Academic Program Prioritization Implementation Committee (APPIC) and the Academic Program Prioritization Advisory Committee by Interim President La Jerne Cornish. The APPIC created the “The Shape of the College” document which outlined its recommendations and was released to the campus community Jan. 13, 2020. Cornish and former President Shirley M. Collado approved the APPIC’s recommendations Feb. 24, 2020.

The college is currently in Phase Two of the APP which involves restructuring various parts of the college, like moving the Department of Theatre Arts, which was in the School of Humanities and Sciences, to the School of Music. Phase One included the ongoing cuts of 116 full-time equivalent (FTE) faculty positions and 26 majors, departments and programs.

Sauter Velto ’88, a graduate of the School of Music, said the elimination of the graduate music programs has contributed to her reasons to no longer donate to the college. She said this cut impacts the whole music school, not just prospective students.

“It doesn’t make the school as attractive,” Sauter Velto said. “It doesn’t allow there to be as many graduate assistants to teach the undergrads, and you don’t have the graduate students there as examples.”

She said that at the moment, she is still uncertain if she will donate again, but she also said she wishes she saw more communication and outreach to alumni from the college.

Emma Whitford, reporter for Inside Higher Ed, said donations made by alumni fell by about 2% in 2020 because of the COVID-19 pandemic. However, she said Ithaca College beat that 2% decrease despite COVID-19. In 2020, total donations to colleges fell from $49.6 million to $49.5 million. She said even though there was not an increase in donations, it is not necessarily a bad thing.

“At the very beginning of the pandemic, experts were worried that the uncertainty of the stock market and personal finances would severely slow donations to colleges, and, while it varies by institution, that didn’t really pan out,” she said via email.

Stella Rivera ’19 said even if she did have the means to donate, she also would not due to the APP process. She said she believes the results of the APP are unacceptable.

“It’s also frustrating to see the administration tout that the college is such an amazing school and that they have all these top-rated programs,” Rivera said. “The people that make those programs work are the teachers. … They are what makes all of the programs incredible.”

She also said she appreciated the IC Alumni Against Austerity (ICAAA) group for giving alumni a voice. ICAAA was created in January 2021 in response to the APP. Since its creation, the group has held meetings to discuss the APP and created a portal that allows members of the campus community to submit complaints against the Senior Leadership Team and the Ithaca College Board of Trustees.

Rivera said she does not want to donate to the college because of Collado’s rocky tenure. Additionally, she said she believes decisions are made at the college in a top-down way with little input from alumni.

For the 2020 fiscal year, more than 40% of colleges experienced a 10% or more decline in donations. The COVID-19 pandemic may have also impacted alumni’s willingness or want to donate, as campuses were closed, meaning colleges could not host on-campus events for alumni. There was no in-person Alumni Weekend in 2020 or Senior Splash for the Class of 2020. Alumni Weekend 2021 was held in person in October 2021 and a Senior Splash event for members of the Class of 2020 was held in June 2021. The college was closed for Fall 2020 and classes were held remotely. Spring 2021 was held in a hybrid format, but visitors were not allowed on campus. The college is fully open for Fall 2021.

Sarah Grunberg ’08, former lecturer in the Department of Sociology, said that since she graduated, she has donated back to the college a few times. However, in recent years she said she has not.

“Because of the lack of transparency on both the board of trustees level and the upper administrative level around finances … I didn’t feel like the decisions to cut programs and faculty were fiscally responsible,” she said. “I just chose to put my money elsewhere.”

Grunberg said she gave back to the IC Alumni Action and Worker Support Fund, which is a fundraiser started as a way to help faculty members who were cut by alleviating some financial burdens, rather than the college itself. She said she gave more to the support fund than she ever would have given to the college.

“There were so many people who were in need as a result of the cuts,” she said.

Grunberg said that in order for her to consider ever giving back to the college again, she would donate to very specific programs if she was certain that the money would go to the program and be distributed by people in those programs. She said she would also want to see changes in leadership in the board of trustees.

“I guess that would make me feel a little bit more willing to donate back to the institution if I felt that the board was a transparent board that actually represented the members of the community,” she said.

Grunberg said she also has felt like there has not been the best alumni outreach done by the college.

“You can’t ask alumni to give to an institution that does not care about alumni,” she said.

Tanya Hutchins, president of the Alumni Association Board of Directors, said via email that the association is always looking for new ways to reach out to alumni.

“Since I’ve been president, I have received calls, emails and texts from alumni asking about when regional events will come back or what events are being planned,” she said via email.

Hutchins said she does not believe there has been a decline in the number of alumni who are active and engaged with the college, however, she said she has heard people not fully understand the APP.

“I know we have to rebuild trust with what I believe is a small group of alumni who are very vocal about not wanting to participate until certain things happen, but I encourage them to support our students,” she said via email.