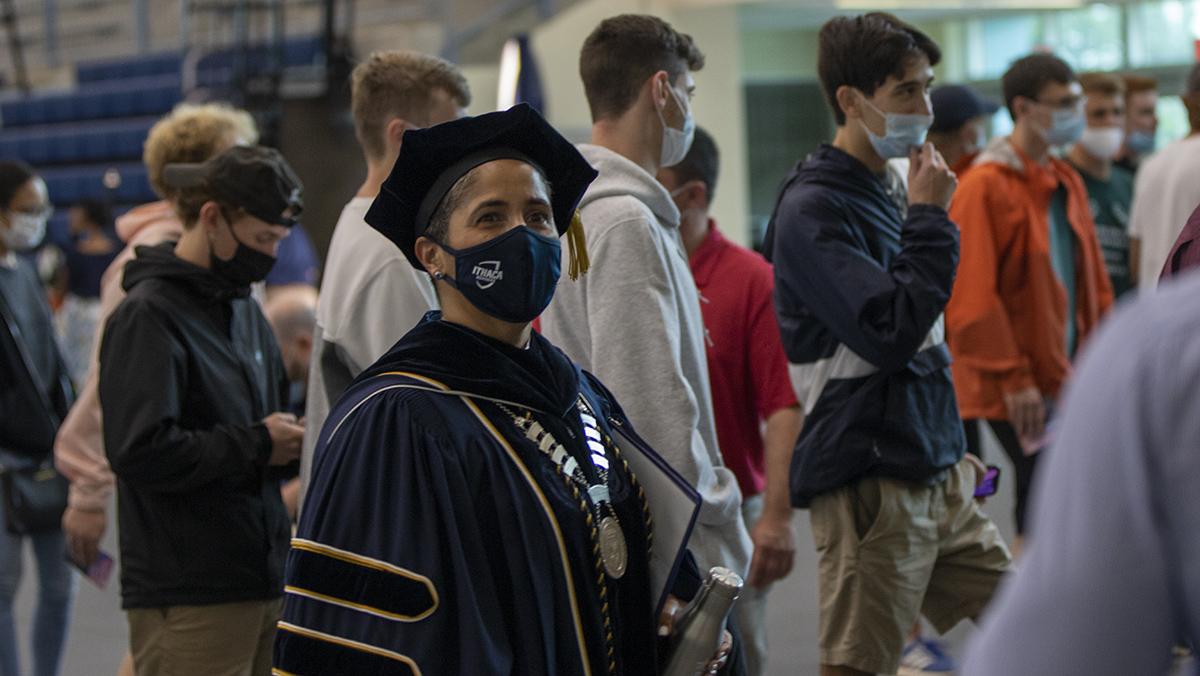 Some members of the Ithaca College community have expressed disappointment in President Shirley M. Collado’s last year as president following the announcement that she is leaving the college.

In a July 8 email to the campus community, the Ithaca College Board of Trustees announced Collado will be leaving the college Jan. 10, 2022 to become the president and chief executive officer for College Track. She will serve as the senior advisor to the interim president and the board of trustees effective Aug. 30, 2021, until Dec. 31. La Jerne Cornish, provost and executive vice president, will serve as the interim president for the 2021–22 academic year. The board of trustees said in its announcement that it will be considering the next steps in planning for the next president of the college.

“Many of you have become trusted friends and colleagues,” she said in the message. “And to our students — you are the true promise of Ithaca College, and you will stay in my heart forever.”

Dave Maley, director of Public Relations, referred all further comments from Collado and Cornish to the announcement made July 8.

Collado was named the ninth president of the college in 2017 after former President Tom Rochon stepped down July 1, 2017. Rochon retired after protests led by the group POC at IC following multiple racist incidents that happened during Rochon’s presidency, which spurred national attention. Rochon also received votes of no confidence from faculty and students.

Lauren Suna ’20 said that when the board was conducting the search for a new president after Rochon, she and her friends were excited for Collado’s presidency.

“Everybody was like, ‘This is great, a change is coming and this change is going to be good and it seems like we have someone who’s going to be great and listen and be transparent,’” she said.

Suna said that while she had been looking forward to Collado’s presidency, when she learned about Collado’s past, she had mixed feelings about Collado. In 2018, Collado received backlash and support from the college community following news that she pleaded no contest to a sexual abuse charge in 2001.

Suna said she started questioning the board of trustees’ decision to appoint Collado and said she hopes the search for the next president is not closed. She stressed that students, faculty and staff need to be involved.

During her time at the college, Collado created and began implementing the five–year strategic plan, Ithaca Forever, which includes plans for building off-campus relations, increasing endowment while lowering the cost of attendance and investing in college employees.

Recently, Collado received backlash in response to the Academic Program Prioritization (APP) process which included the elimination of 116 full-time equivalent (FTE) faculty positions and 26 departments, programs and majors. As part of the final process of implementing the APP, Collado and Cornish approved the recommendation for the cuts. Campus community members held multiple protests in response to the cuts, some where they specifically voiced their dissatisfaction with Collado.

Ithaca College Alumni Against Austerity (ICAAA) announced Aug. 25 that it is gathering complaints from students, faculty and staff against the board of trustees and Senior Leadership Team (SLT). The group questioned why the college has yet to declare financial exigency — a financial crisis that threatens the survival of colleges or universities and allows colleges and universities to lay off tenured faculty members. Collado has previously said that the college is facing serious financial issues.

The ICAAA launched a complaint portal to allow campus community members to provide evidence regarding the college’s alleged fiscal mismanagement, general incompetence or excessive spending by Collado or other members of the SLT.

“Serious questions have arisen as to whether the board of trustees should have acted sooner to remove former President Collado from her position (or even hire her in the first place) given the fiscal state of the college, Collado’s compensation package, allegations of intimidation and retaliation and her criminal history,” the statement said.

IC Alumni Against Austerity stated it would use the complaints to determine if there is sufficient evidence to file a complaint with the Charities Bureau of the New York State Office of the Attorney General.

The college announced Collado’s departure on Instagram on July 8. The post received over 200 comments from college community members expressing their thoughts on Collado leaving

Another user @katiemarie.icdc commented, saying “Hurts to think that she used IC as a resume-builder and won’t have to stick around to deal with the fallout of cutting ¼ of our faculty and programs.”

The Open the Books (OTB) coalition began during the 2020–21 academic year in response to the APP process. OTB said in a statement to The Ithacan that the group has many different feelings about Collado’s departure.

“We are aware that the problems at Ithaca College did not come nor leave with President Collado,” the statement said. “However, many feel like our school and community have been treated as mere collateral damage on a quest for profit.”

During the 2020–21 academic year, Collado and other administrators said they took a salary reduction. However, the amount was not publicly announced and Collado did not disclose her salary reduction despite multiple requests from The Ithacan.

Junior Anna Nicchitta said she has heard students say that Collado is not completely to blame for the faculty and program cuts, but that she still made unfavorable choices.

“When that’s the closest thing I’ve heard to a real positive review of her is that not everything’s entirely her fault, it doesn’t come off great for her,” Nicchitta said.

“I just got the idea from the student body that she wasn’t particularly welcome or beloved here and so I wasn’t shocked that she was leaving,” she said. “I kind of feel a little bit of pity for the next person that has this job because they’re kind of coming into a school that’s in a state of chaos.”

The Board of Trustees said in its announcement that Collado was a strong leader during the finalization of the APP.

“In accepting the Shape of the College plan and beginning the implementation of its recommendations, she has set the college on a path to a sustainable future that is both bold and realistic,” the message said.

The Student Governance Council (SGC) posted a statement on its Instagram after Collado’s announcement. In the statement, the SGC wished Collado luck and said it is looking forward to working with Cornish.

In a statement to The Ithacan, members of the Faculty Council Executive Committee (FCEC) said that while they do not speak for all faculty, they feel like Collado was able to bring more awareness to inclusion, diversity and equity matters on campus.

“We must, in good faith, take actions to heal our community from the exhaustion and isolation we have faced,” the statement said. “We must lift one another up and embrace our differences.”

The statement said that the Faculty Council is looking forward to the upcoming presidential search.

Rick Seltzer, a former writer for Inside Higher Ed, wrote an article titled “Who Leads Colleges After COVID-19?” that stresses the importance of college presidents during the post-COVID operation of institutions.

Seltzer said via email that presidents need to work with other administrators to create ways to move their schools forward.

“Leadership is critical in times of change, especially at colleges and universities, where the tradition of shared governance means that faculty members and boards of trustees have some input into decisions,” he said via email. “It’s especially hard because the three parties in shared governance — faculty members, administrators and board members — don’t always agree on how much input they should each have.”

The Board of Trustees has not announced whether the search for the college’s tenth president will be open or closed.

Belk-Gupta said she thinks it would be beneficial to have students and faculty involved in the search.

“I also just hope that the next president is very aware of the situation that they’re coming into and brave enough and adept enough to take it on, because I don’t think that is an easy job and it’s going to just get harder and harder,” Belk-Gupta said.

OTB said in its statement that the search for a new president could be an opportunity for the college to embody inclusivity and transparency.

“We also see this as a potential opportunity for the administration and the Board of Trustees to truly begin considering the input of the entire Ithaca College community in their decisions, including students, alumni, faculty and staff,” the statement said.

Tom Pfaff, professor and chair of the Department of Mathematics, said he hopes to see the college stabilize financially and enrollment-wise over the next few years. He said he would like to see a new president that thinks more collaboratively.

“It’s not just to me a matter of shared governance, that you follow the bylaws, but you actively seek out differing opinions that you engage people that disagree with you, you really try to find out what’s the best way to move forward,” Pfaff said.

He said presidential searches and changes in administration can take a while but he is hopeful that there will be positive change.

“Hopefully over that time we can kind of tread waters successfully and be in a better place,” he said