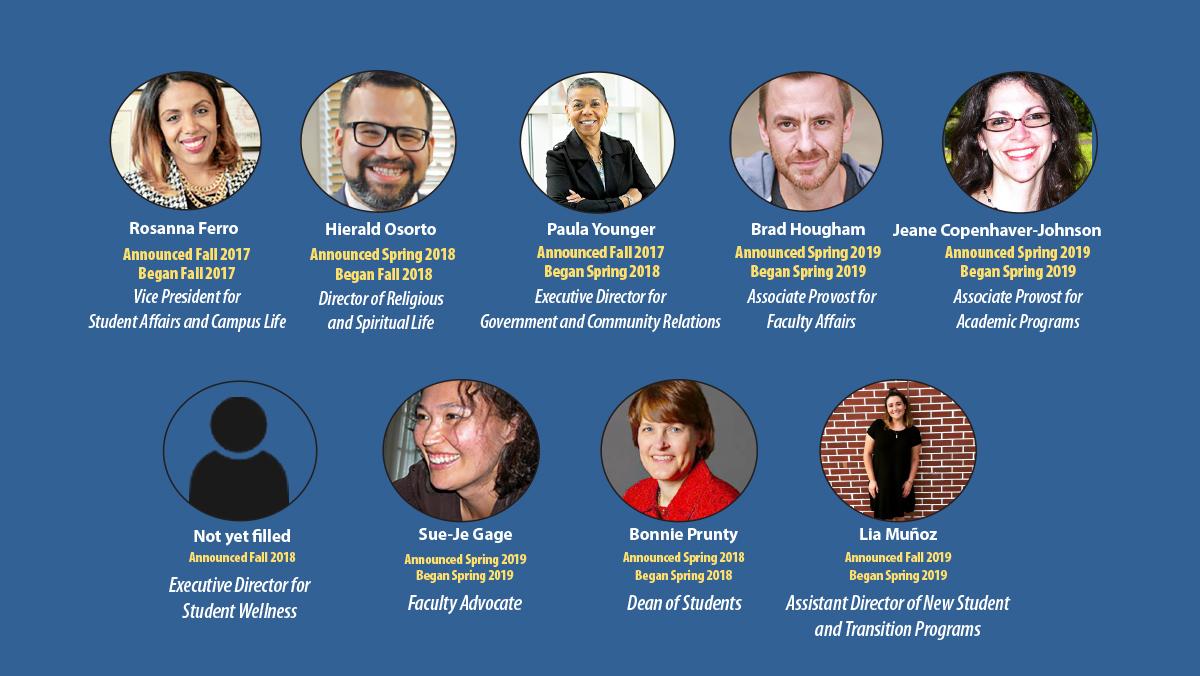 Anna Costa/THE ITHACAN
Over the past two years, President Shirley M. Collado’s administration has added administrators and expanded student services on campus in an attempt to respond to student concerns. However, with rising costs in higher education, the administration is also tasked with balancing the need to provide adequate services for students with the high costs that come with them.
By Ryan King — Assistant News Editor
Published: May 1, 2019

There have been at least nine new administrative positions added over the past two years under President Shirley M. Collado’s administration. Officials from the college said the new positions are needed to provide more support for student services, specifically for populations of marginalized students on campus. These additions also follow national trends and long-existing critiques that higher-education institutions are becoming too bureaucratically bloated, forcing the leadership of the college to confront how the future of the institution will be able to balance administrative support and expensive bureaucratic control.

Collado and Dave Lissy ’87, chair of the Ithaca College Board of Trustees, addressed the issue of balancing the need to keep tuition prices low while providing adequate services for students in an Intercom post published Fall 2018. They did not provide further comment for this article.

“The level of increase in tuition from the current year reflects our diligence in balancing efforts to keep costs as low as possible for students and their families while simultaneously investing in a high-quality student experience,” they wrote. “Maintaining this balance is an ongoing challenge the board and the college’s leadership focus on intently.”

Dave Maley, director of public relations at the college, said the college does not release specific salary information for positions and would not release the total annual cost of the new positions.

Based on data from the Chronicle of Higher Education, many of the new positions, such as associate provost, are common in higher–education institutions. The average salary is $135,067 for associate provosts, $100,194 for deans of students and $142,250 for chief student affairs officers or student life officers.

In Fall 2018, the college announced its surplus dropped from $20 million to $5 million during the 2018–19 academic year. The college said $6.7 million of that surplus was allocated toward salary and benefit changes, including new positions that were added to the Division of Student Affairs and Campus Life. At the time, Bill Guerrero, vice president for finance and administration, said he did not believe the decrease in surplus was necessarily an indicator of financial trouble for the college but rather it was an opportunity for the college to make investments.

Early in Spring 2019, the college began to ask departments to make budget cuts in response to an anticipated decline in enrollment for the 2019–20 academic year. Previously, Guerrero expressed concerns about the sustainability of the college’s financial situation.

Collado provided a comment that she and her senior leadership team have made careful adjustments to the administrative structure at the college in order to improve the student experience.

“The senior leadership team and I have been engaged in thoughtful, intentional work to shape an administrative structure that supports our mission-critical functions as a college,” she said. “These efforts have required an honest assessment of the college’s resources and a creative deep dive into the ways in which we could adjust existing positions and portfolios to best serve our students and our community, adding new lines where necessary.”

Administrative positions have been rising on college campuses since the early 2000s. According to a Wall Street Journal report, the number of managerial or administrative employees  increased 50 percent faster than instructors between 2001 and 2011. Research by the Delta Cost Project concluded that the ratio of full-time faculty and staff to administrators declined by 40 percent.

Rita Kirshstein, visiting professor of higher education administration at George Washington University and former director of the Delta Cost Project, which researches how colleges and universities spend their money, said she believes most of the national increase in administrators is intended to support students. She said this is because colleges have been attracting a growing number of students with increased needs, particularly among those from marginalized groups, like first-generation students and students of color.

“It would be a disservice to bring them into a campus and not provide academic and social support for them and that is where a lot of the money is going,” she said.

However, institutions are now attempting to find a balance between providing students the services they need and keeping tuition prices reasonable. Kirshstein said each institution has to assess the student needs on campus and make decisions about whether or not to invest more in a certain area.

In Fall 2018, the college enrolled the largest percentage — 24.2 percent — of Asian-American, Latino, African-American and Native American students in the college’s history.

David Perlmutter, professor and dean of the College of Media and Communication at Texas Tech University and author of the “Admin 101” column in the Chronicle of Higher Education, said this tension between providing students the services they request while keeping tuition prices down is an inevitable issue. He said students attending a college have high expectations of what contributes to a positive experience. He said that though these amenities and services are critical to add, there will always be a trade–off in terms of price. However, he said how much these new services cost is often opaque for students.

“I always say that if you, as a student, are going to ask for something, or demand something, or as a parent, then it’s reasonable to say, ‘Let’s calculate what the bill is from there,’” he said.

Support structures are not only being built at the college for students, but they are also being utilized for faculty too. The newly adjusted provost’s office positions — associate provost for faculty affairs, faculty advocate and associate provost for academic programs — also aim to give faculty more support, said La Jerne Cornish, provost and senior vice president for academic affairs, in a statement provided to The Ithacan.

Tom Swensen, professor and chair of the Department of Exercise and Sport Sciences and chair of the Faculty Council, said he thinks the faculty advocate position was needed as a kind of “ombudsperson” extension to allow faculty a better way to communicate with the administration. At the beginning of former Ithaca College President Tom Rochon’s tenure, there were also multiple provost positions similar to the system Collado has reinstated — Rochon merged responsibilities into fewer positions to save costs. Although the college was able to save money, Swensen said it also lost critical support structures.

“We got too lean, and we weren’t able to do all the tasks we needed to do,” Swensen said.

“We went through a period under Rochon where we dumped administrators and even merged divisions,” Swensen said. “He wanted to help keep Ithaca affordable.”

One of the administrative changes under Rochon was the merging the Division of Student Affairs and Campus Life with the Division of Academic Affairs into Educational Affairs. Swensen said this merger caused problems.

“Merging those two didn’t work,” he said. “It was impossible for a provost to be the VP of educational affairs and then be able to manage academic affairs and student affairs.”

However, Collado reinstated the division. This was a defining moment of her tenure, signifying her support for marginalized student groups that the division has specifically been structured to support.

Swensen said he thinks some of the new administrative positions are necessary because there has been an increase in first–generation students, students of color, technology use and other changes that create a need for the college to add more services, requiring oversight and a need for more administrators. He said it will be difficult for the college to figure out how to balance these support systems and its financial model.

Rachel Fomalhaut, chair of the Ithaca College Contingent Faculty Union and lecturer in the Department of Writing, said she has gotten a sense, particularly from her work with the contingent faculty union which has had disputes with the college administration in the past, that the upper administration is better resourced than faculty members are on campus.

However, she said she also believes that many of the lower–level administration positions that have been added are necessary because they help address student needs on campus.

“We do need to grow our service-providing staff quite a bit because there is a greater demand for services nowadays for mental health and in order to make campus safe and inclusive for all students,” she said.

Sophomore Quinn Theobald said he uses student services like the Center for Counseling and Psychological Services (CAPS) on a regular basis and finds them to be helpful. He said he thinks adding new administrative positions, like an executive director for student wellness, allows for more precise management of those services.

“I think the college has great services, but there are some, like CAPS, that could use more staff,” he said. “I think it’s cool to add more administration that is going to be more specific so then, hopefully, those people can focus on some of the smaller issues.”

Sophomore Shane Fox said he would support moderate increases in student services as long as it does not have a drastic impact on tuition prices.

“I think there should be some sort of middle ground between rising tuition costs and this,” he said. “If they need to spend a little more money, then that’s OK, to an extent.”

Junior Vaughn Golden, who is also a Student Governance Council senator-at-large, said he thinks students often think about how their tuition dollars are being spent, despite there being possible confusion on their part about how the administration makes budgetary decisions.

“I don’t think that students necessarily know about all the things that go on in the upper tiers of the administration, but I think students want to see services that efficiently serve their needs,” he said. “I think that, at the end of the day, students are aware that money is being spent sometimes in places that are suited to their needs and other times not so much.”

He said that he believes students need to be more involved in helping the college find a good balance between providing students with sufficient services and maintaining low tuition prices and that the administration needs to take their input seriously. He also said he wants the college to increase transparency and ideally make line-item budgets available to students so they can give informed feedback.

“Right below [transparency] on my priority list is having student oversight in some of these campus and administrative actions,” he said. “So if you can’t public release things, everyone should at least have equal representation on campus and be in the room when those decisions are made.”